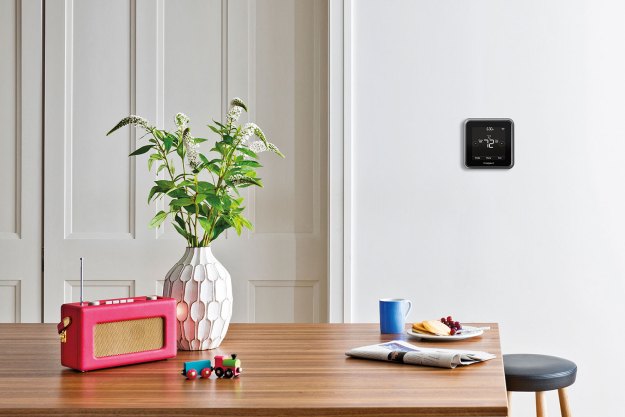 “The Lyric T5 won't win any beauty contests, but is an affordable smart home upgrade.”

With millions of devices installed around the world over the last century, Honeywell has had a major influence in driving development of in-home technology.

So it’s somewhat surprising that the brand — from a mindshare perspective, at least — lacks the kudos granted to newer entrants like Nest and Ecobee. From an app perspective, the Honeywell brand might be considered more of a dusty, old appliance than a funky new “application.”

The $150 Lyric T5 Wi-Fi Thermostat is one of a range of Honeywell smart home devices fighting that perception. Controllable via touchscreen and a mobile app, with support for both Apple HomeKit and Amazon Alexa, Honeywell has certainly packed significant connectivity and a swathe of features into a svelte, budget-friendly, four-inch square form factor.

However, it faces tough competition from modern smart home specialists who have a wealth of insight and feature refinements packed into third- or fourth-generation thermostats. Let’s open the box and see how the Lyric T5 stacks up.

With an install base of tens of millions of devices over the century, Honeywell may not be the coolest kid on the block, but they’re still OG smart home innovators. To be fair, their ubiquitous beige, wall-mounted slabs of plastic aren’t exactly sexy and have been in the crosshairs of cooler brands like Nest and Ecobee for some time.

On the plus side, the Lyric T5 is not beige. But out of the box, you can immediately see its roots evolve from those traditional wall mounted controllers. Honeywell’s designers have made some effort to boost the T5’s aesthetics though, with a metallic gray, beveled surround.

But make no mistake, it still looks and feels like a budget smart home device. Home interior aficionados will take a pass, we’re sure. The four inch square monochrome touchscreen looks ready for a game of Pong and doesn’t do the device many favors. Stacked up against the iconic shape of the Nest Learning Thermostat, the Lyric T5 looks quite basic.

Like any smart home thermostat, you’ll need to allow yourself some time to install the Lyric T5, but we found fitting the hardware to be mostly painless — apart from continually pricking our fingers and thumbs on the T5’s sharper-than-strictly-required connector pins, that is.  Honeywell packages the thermostat with a universal mounting system that connects to your home wiring, plus wall screws and anchors.

Honeywell has packed connectivity and a swathe of features into a svelte, budget-friendly, four-inch square form factor.

There’s even a little sheet of stickers to label each wire during changeover, but you don’t get the mini screwdriver, rear-mounting cover plate and integrated spirit-level found on Nest. So be prepared to touch up your wall decoration when you remove your old device. On the plus side, Honeywell adds an excellent installation manual that includes fully-illustrated steps.

Our main frustration during setup was with the Lyric app, which was dogged with issues connecting the thermostat to our Wi-Fi network, then registering the device on Honeywell’s servers. Each time there was an issue, we had to repeat the whole setup procedure. Forget pricked fingers – the repetition was really painful.

Give yourself an hour to swap out the thermostat hardware and install and configure Honeywell’s controller app, but expect a few bumps along the way.

How’s life with the Lyric T5?

As long as you remember that this is an entry level Wi-Fi Thermostat – one that’s not as smart as leading competitors – you’ll be fine. The T5 offers convenient temperature control from your smartphone, but there’s no fancy learning capabilities or automated schedule adjustments. Just like an old-school thermostat, you create a schedule and adjust the temperature, either with the Lyric app or directly on the device, and the thermostat delivers.

Honeywell’s designers have made some effort to boost aesthetics, with a metallic gray, beveled surround.

The T5’s touchscreen display is a slight step up from a traditional digital display but still lacks the simplicity and clarity of competitors. Controls, buttons, and readings fight for attention and clutter the screen. The dull, monotone text is difficult to see from more than a few feet away, and a highly reflective display surface does a better job as a mirror than a screen. After a few minutes, the touchscreen becomes a mess of smeared fingerprints, which further obscures the display. Keep a microfiber cloth handy.

Thankfully, the Lyric mobile app is neatly designed – simpler, clearer and responsive. Change the temperature on your phone and the thermostat responds in a second or two. It’ll quickly become your favored option.

Honeywell has a couple of bonus features that add a splash of modernity. The Lyric app supports a geo-fencing feature that switches the thermostat to an Away mode when you leave the house and, as you’d expect, you can control home temperatures remotely from your phone. Apple HomeKit and Amazon Echo fans can also manage and monitor the thermostat using voice commands via Siri or Alexa which, given the Lyric T5’s budget positioning, gives the device a boost.

The Honeywell Lyric T5 boasts easy to use, app-based temperature controls but not the looks or the smarts of trendier devices from Nest or Ecobee. At $150, it’s a solid option for homeowners on a budget or a basic smart home upgrade for a parent or grandparent.

Yes – if you’re at all interested in aesthetics, you’ll prefer the graceful simplicity of the $249 Nest Learning Thermostat, which also supports a strong assortment of smart home integrations and automated schedule management. Alternatively, the $169 ecobee3 lite and $249 ecobee4 support sensors around the home and an advanced suite of smart features that make them a stronger choice than the T5.

Honeywell has been around for more than a century and isn’t going to disappear overnight. With a huge network of contractors installing and servicing their products, you can expect support for the Lyric T5 to be available for a long time to come.

If you really need a basic “smart” thermostat and you’re seeking to absolutely minimize the spend, buy the T5. Otherwise, spend a little extra on a better-looking device with a broader suite of features.