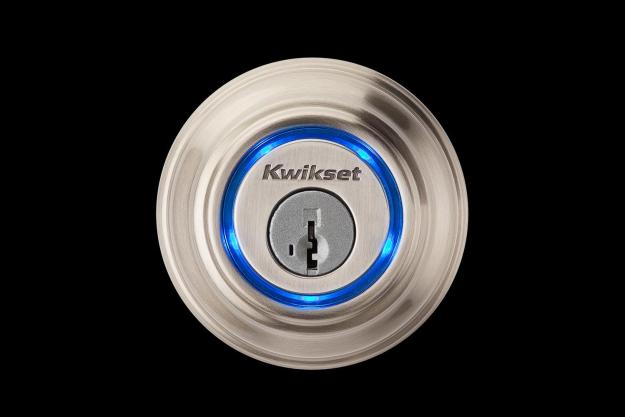 “Despite the fact that it’s a breeze to install and boasts a handful of super-convenient features, Kevo’s lack of compatibility with Android means most users won’t be able to use them.”

The premise of a smart lock is simple: Quit carrying around little chunks of metal to unlock your door, and instead be greeted by an open lock through the magic of technology. Unfortunately, it’s also one of those futuristic devices we’ve been promised for years, that seem to be taking their time arriving.

There are only a handful you can buy now, and not all of them are as “smart” as you’d think. Kwikset’s Kevo was one of the first smart deadbolts to hit stores, and also the first to require neither key nor keypad. Instead it relies on a Bluetooth signal from your smartphone to automatically unlock and lock as you come and go. Using this technology, the $219 Kevo promises to make your life easier and more secure — but does it live up to its lofty promises? Is it worth shelling out hundreds to replace your regular dumb lock? We got our hands on one to see for ourselves.

Despite the tech inside, the Kevo is no more difficult to install than any other lock. Compared to a regular deadbolt, you’ll only have to fiddle with a couple wires and pop in some AA batteries — otherwise the process is basically the same. So long as you can follow a few simple instructions and know how to use a screwdriver, you should be able to have this badboy up and running in a half hour. If you’re handy, and have installed a lock before, you’re probably only looking at 10 or 20 minutes.

After installation, the next step is to sync it with Kwikset’s iPhone app. There isn’t currently a Kevo app for Android, Windows, or Blackberry phones, which is a pretty huge drawback, and you’re also out of luck if you rock anything older than an iPhone 4S. Technically, you can still use the battery-powered key fob that comes with Kevo, but without the app, you won’t have access to many of the lock’s best features.

After syncing, you’ll need to calibrate the lock so it can recognize when you’re leaving the house or coming home. If you don’t complete the calibration process properly, the lock won’t understand when your phone or key fob is nearby, so it won’t unlock unless the phone is right next to it. Getting this right is important.

Luckily, the Kevo’s instructions are crystal clear, easy to follow, and the process is far less clunky than it used to be. Some early users complained about having to perform the process multiple times before the calibration actually worked, but UniKey (the company behind the lock’s tech) has since released a major firmware update to improve calibration speed and accuracy. We recalibrated several times for the sake of testing, and it worked fine every time.

Aside from being a breeze to set up, the Kevo looks great on your door – because it blends in. Pretty much every other smart lock has some sort of snazzy modern design going on, but to an uninitiated bystander, Kevo looks like any other lock. Potential intruders won’t have any idea you’re rocking a smart deadbolt on your door, which could encourage tampering. It even comes in three different finishes — nickel, brass, and venetian bronze — so you can match it to your doorknob.

You never need to whip out your keys to unlock your door.

Only the multicolor LED indicator ring around the lock signals that this is anything other than just another deadbolt. When it’s not illuminated, you can hardly even tell it’s there. When it is, it tells you what the lock is up to. It blinks blue when it’s verifying the connection to your phone, green when the lock is successfully activated, a pinkish purple color if the signal is too low, and red if the lock fails to close. It might seem like an insignificant feature, but the color-coded indicators make using the lock much more intuitive.

Another awesome feature that helps you justify the high price tag is the ability to send out virtual “eKeys” to your friends and family so they can use their phones to unlock your door. You probably won’t use this feature all the time, but when the day comes that you need to let somebody into your house while you’re away, it’s a godsend. Originally, Kwikset made these keys single-use only, and charged $2 apiece after the first one, but thankfully it’s simpler now. With the updated app, each lock comes with a set of six reusable eKeys you can assign to anybody you please. These new eKeys can be activated, deactivated, and reassigned as much as you like, and you’ll only have to pay a one-time fee of $2 for each key past the first six.

After it’s set up and calibrated, Kevo is insanely easy to use. When you come within Bluetooth range, Kevo recognizes your phone’s specific Bluetooth signature, and will unlock when touched. All you’ve got to do is tap on it with your finger, and if everything works properly, it’ll blink to life and retract the deadbolt. It also works the same way in reverse, so when you leave each day, locking your door is as easy as tapping the lock. You can also unlock Kevo with a key (two are included) if all else fails, but doing so kind of undermines the point of buying a smart lock.

In our experience, the unlocking process isn’t much faster than using a real key or punching a code into a keypad (since the lock usually takes a second to recognize your Bluetooth signature anyway), but it’s definitely easier to activate. You never need to whip out your keys to unlock your door, which really comes in handy when you’re carrying an armload of groceries or luggage.

In terms of performance and convenience, Kevo definitely lives up to its promises. Despite having a few quirks and setup problems at launch, UniKey has successfully smoothed out all of Kevo’s bumps with the latest firmware update. In our experience, it works exactly as advertised. The thoughtful and inconspicuous design makes it blend in, and the user interface — in both the app and the physical lock — are simple and intuitive.

That said, there are a few downsides that are hard to overlook. The fact that the Kevo app doesn’t work with Android is a fairly major drawback. Unless you own an iPhone 4s or later, buying this lock probably isn’t worth it, since you’ll miss out on some of the best features. Furthermore, the Kevo’s lack of home-automation protocols like Z-Wave, Zigbee, or Wi-Fi makes it nearly impossible for the lock to interact with other smart-home products.

So, all things considered, if you’re an Android user or you’re looking for a smart lock that fits into your existing home automation setup, we recommend you look elsewhere. However, if you happen to own a newer model iPhone, and you’re merely looking for an extra bit of convenience when locking and unlocking your door, look no further.

Topics
The best smart plugs of 2022: Our top picks
Best Buy Black Friday deals: TVs, laptops and air fryers
9 Sonos tips, tricks, and little-known features
How to give smart home gifts
Cyber Monday deals drop this Dyson cordless vacuum to $350
The Roborock last-minute holiday sale will save you a fortune
This Keurig is under $50 for Cyber Monday, but it won’t last
Get the Amazon Echo Dot for $15 for Cyber Monday 2022
This Echelon smart rower is 50% off for Cyber Monday — get it now
It’s not quite KITT, but you can put Alexa in your car for $15 today
Amazon Echo Show 15 is $80 off with this Cyber Monday deal
How smart water management can protect against damage and save money
Best options for outdoor lighting at home