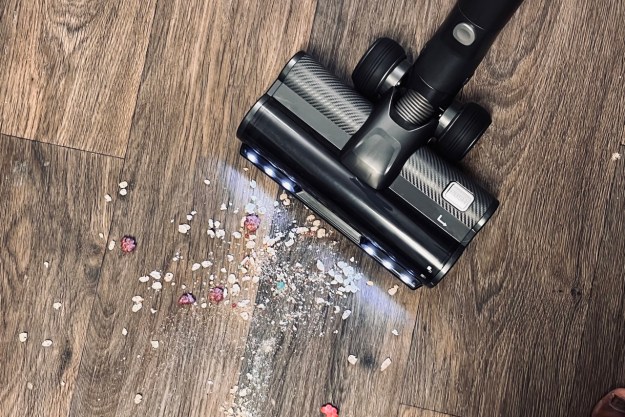 “While not the smartest vacuum, the Levoit VortexIQ 40 will clean any dust or debris without you having to think about it.”

In the realm of smart home tech, robot vacuums are one product that helps you immensely. They aren’t always exciting by any means, but you will appreciate them. Generally, they fall into two categories, expensive with extensive features or budget and basic. The budget ones will often just give you a surface-level clean, but if you wanted that deep or precise clean, you’ll need to do it the old-fashioned way, with a manual vacuum. That’s where the Levoit VortexIQ stick vacuum comes in.

Levoit’s VortexIQ 40 cordless stick vacuum has easy-to-change accessories and an auto mode that adjusts suction power automatically. With five different power levels, this vacuum will quickly grab anything you have hidden on your floor. If you’re a pet owner like me, you’ll soon discover how much hair is hiding in your carpet.

I’ve had the VortexIQ for the past month and have tested it extensively. I’ve used it in my apartment on both carpet and hardwood and in my car! This product has been a dream for what it is. But, before I dive more into the ins and outs of the VortexIQ, let’s discuss what you get in the box.

When you first open up the box, you’re presented with a disassembled VortexIQ 40. Along with the vacuum (in about three easy-to-connect pieces), you’ll get three types of hoses, a wall-mount base, and the battery and AC charger. There’s the long, rolling floor hose, a telescopic crevice tube, and a dusting brush.

I chose to put up the base so that the vacuum and accessories can hang, charge, and reduce storage space. That easy process took about five minutes, and all I needed was a drill and screwdriver. Also, it’s nice that once you hang up the base, the vacuum should always be charged whenever you pick it up. That will help make sure you’re always getting its estimated 40 minutes of battery life.

The VortexIQ Is fully plastic, as with any other vacuum, and weighs 7 pounds when assembled with the swivel brush head. That’s not bad when you’re rolling the vacuum across the floor. However, when using the smaller brushes, the vacuum weighs considerably less and shouldn’t cause any sort of fatigue.

It comes with a 0.6-liter dust bin, which I found to be a bit small and cumbersome to deal with. Using the VortexIQ in my 1,000-square-foot two-bedroom apartment would require me to empty the bin twice. This was mainly due to pet hair, but I digress. You’ll also always want to empty the bin before and after use. Unfortunately, there’s also no automatic emptying attachment such as those with robot vacuums. The bin also has two ways to open up for clearing. You can do a quick release that opens the bottoms and has dirt fall out. This hardly worked for my use case, likely due to the amount of hair I hair instead of small objects like food or toys. You can also easily unscrew the whole bin and empty it. That was preferred for me and didn’t take much more time. Plus, I was able to clean it more efficiently and thoroughly.

It was easy to guide over carpet and hardwood, though I did have a few issues with thicker rugs.

The swivel head also has LEDs that help guide you in dimly lit areas. They also just genuinely help you see dirt on your floor more easily. Speaking of the swivel head, it was easy to guide over carpet and hardwood flooring. I did have some issues with some of my thicker rugs, though. Whether I was on auto, low, or high power, the vacuum would get stuck on the fiber and pull the rug. A quick power-off of the VortexIQ would drop the rug, and I would vacuum elsewhere. Thinner rugs were of no issue.

As stated above, the Vortex IQ comes with three hose attachments: a swivel, a telescopic, and a dusting brush. All brushes come with a smaller 3-inch squared opening, which was big enough to pick up most dirt and drops I couldn’t pick up by hand. The swivel head was the main brush I used, with the other two brush heads used for more specific tasks.

The telescopic hose has two lengths that are easily adjusted by a button. This helped when reaching for floor corners or making it smaller for shelves and other easier-to-reach areas. The dusting brush head also had an adjustable length button which either made the bristle more prominent or the hose more prominent. I used this head to help with furniture and my car, which did a pretty good job. Dog hair in the car was a bit more difficult to clean up.

As far as actual cleaning performance, this vacuum did a great job. It has an auto mode that adjusts the suction power level between five stages. Auto mode is what I used most of the time when cleaning, and it was sufficient enough for most jobs. When I knew I needed a power clean and was spot cleaning, I manually upped the suction level to its highest point. I also had the power level at its highest when using the smaller brushes. You will quickly hear the difference in sound when cleaning through different power levels, and I would not suggest using the vacuum while others are sleeping when not at a lower level.

The automatic high-power suction was sporadic at best.

The quirk I ran into with auto mode was that it would ramp up for only half a second or so and seemingly at random. Now, this may be me moving the suction over an item before I could even notice it, but again pretty much at random. Sustained high-power suction was not a thing. So if you need continuous, high-powered suction, you are better off manually changing it.

Battery life was pretty much as expected. You could hit 30 to 40 minutes of runtime in auto mode. If you ever fully deplete the battery, it will take about four hours for it to charge on the wall mount completely. With the swivel hose attached, the vacuum can be slightly heavy, so using it for the complete estimated 40 minutes may be considered a workout.

Smarts of a sort

The VortexIQ isn’t a smart vacuum, but it does automatically adjust suction as needed. Don’t expect an app or anything, though; instead, the VortexIQ 40 forgoes higher-end technology for a lower price point.

Levoit’s VortexIQ 40 stick vortex is a pretty decent basic vacuum to have around the house, especially if you have kids or pets. Out of the box, you get a setup that will get the job done without needing to buy anything extra. Also appreciated is the wall mount to keep your vacuum charged and out of the way as well as the attachments for any other upholstery you need to clean.

Last but not least, one of the best things about this vacuum is that it is only $200. That is quite a reasonable price for this whole set, although it’s higher than a basic vacuum. It will run you much less than a comparable robot vacuum and all you have to do is walk around with it. The VortexIQ is the vacuum for you if you need a more basic but efficient cleaner.

There are plenty of stick-style vacuums for you to compare to Levoit’s VortexIQ 40; with that, there are better alternatives. Of course, you could get all the bells and whistles with various vacuums that cost hundreds more.

For example, look at the Dyson Outsize Absolute. It’s packed to the brim with powerful features, but carries with it a $900 price tag. Though the VortexIQ 40 might not be on the same level, it’s a fraction of the price for a decent amount of cleaning power.

For something more in line with the price of the VortexIQ 40 with a few more features, the Roborock H6 Adapt will give you over double the battery life with half the weight.How long will it last?

The VortexIQ 40 is made of more rigid plastic materials, so it should cover you for a few years if taken care of. You can also wash the filters to keep the motors clean over the lifespan of the vacuums. Also, without much smart technology involved in this vacuum, software-related issues are a non-concern.

If you need a basic vacuum in one low-cost package, the VortexIQ 40 is a solid choice — especially if you need a spot cleaner to complement your robot vacuum. But if you want one device to rule them all and have more smart features, there are better options.