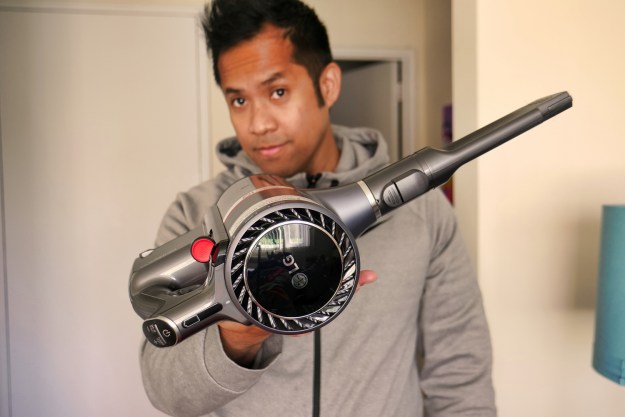 “With a huge appetite and set of tools, the LG CordZero A9 Kompressor is ready to tackle cleaning.”

Cord-free vacuums are seemingly all the rage in the home cleaning space these days. They bridge the gap between portable handhelds (think dustbusters) and traditional uprights by offering the best of both worlds. While Dyson clearly stands out from the pack for its legendary suction power and meticulous engineering, there have been several other companies that have been attempting to cash in on this trend.

LG is no stranger in the small appliance space, and it’s clearly a focus for the company. Its CordZero A9 Kompressor seems like an ambitious offering with its versatility, but it’ll need to prove first and foremost that it can clean. Not just clean well, but do so extremely well.

Right off the bat, the LG CordZero A9 Kompressor doesn’t stray too far from the familiar designs we’ve seen in other cordless stick vacs. What sets it apart are the various accessories, charging base, and batteries that come with the package. This model covers all the bases as a carpet, hardwood, and furniture cleaner.

The accessory attachments consist of the following: A universal nozzle, power punch nozzle, crevice tool, and the combination tool. Using the universal nozzle felt awkward at first, until I realized that you can extend the length to make it more comfortable to use while vacuuming carpets. Also, I like how the power punch nozzle is effective at drawing smaller pieces of debris off of furniture, but it’s almost unusable for cat trees littered with hair because it has trouble sucking up larger bunches of fur. That’s due to the tight spacing of the hard plastic brush within the nozzle.

One base to rule them all

Unlike other cordless stick vacuums, it comes with a freestanding charging base for the added convenience of storing the attachments and charging it up. Most other cordless sticks come with a base that you’ll have to fasten to a wall or something else, but this one is its own dedicated unit — so I love that I don’t have to wall mount it. LG certainly spent time on the charging base’s design given all the small touches found with it. For example, there are clamps to better manage the charging cable so that it’s not messy.

Not only does it charge the vacuum while it’s attached, but there’s also another compartment that charges the spare battery. Dyson’s V11 Torque is rated for 60 minutes of runtime, which is the same runtime as a single battery pack for the LG CordZero A9 Kompressor. Having two batteries means that I’m able to vacuum for much longer. There’s nothing worse than a vacuum running on empty while you’re in the middle of your cleaning routine.

What I like about the universal nozzle is that I rarely see any hair tangles, plus it’s meant to tackle hardwoods and carpets. Picking up larger pieces of dirt or debris, like cereal, can be troublesome because it doesn’t have as wide of an opening. Instead, I’m forced to lift the vacuum a bit in order for it to scoop them up. For other smaller and finer pieces of dirt, it’s a champ — often sucking them up on the first pass, while a second completes the job.

The CordZero A9 Kompressor’s washable components and filters show that LG designed this model with an eye toward minimal upkeep. The five-step HEPA filtration system is claimed to filter 99.99% of dust and dirt. And yes, it features built-in Wi-Fi with LG ThinQ integration that not only tracks its cleaning history, but can also perform a diagnosis to flag any potential problems. While it’s a nice touch, tracking how long I’ve spent cleaning on what modes doesn’t add anything meaningful to the overall experience.

As the name implies, the LG CordZero A9 Kompressor has the ability to compress down its dustbin using the lever on the unit — giving it a max capacity of 33.8 ounces, versus the 25.6-ounce capacity of the comparable Dyson V11 Torque Drive. It’s useful in the sense that I’m not emptying it as often as other vacuums, but it doesn’t have the best emptying mechanism. There’s a lever on the bottom that opens the lid to dispose of its contents, but I find my hand often get dusty because it’s right by the lever as it opens.

It’s an admirable effort on LG’s part, as the CordZero A9 Kompressor packs quite a punch at $600. It excels enough in every category to be a standout cordless vacuum cleaner in the high-end space.

Indeed, the Dyson V11 Torque Drive does a better job at cleaning and has more suction power, but you’re paying an additional $100 for it. There’s also its sibling, the V11 Outsize, which offers a larger dust bin and swappable batteries.

Yes, the LG CordZero A9 Kompressor rides that fine line between performance and features to make it a well-rounded option to consider.