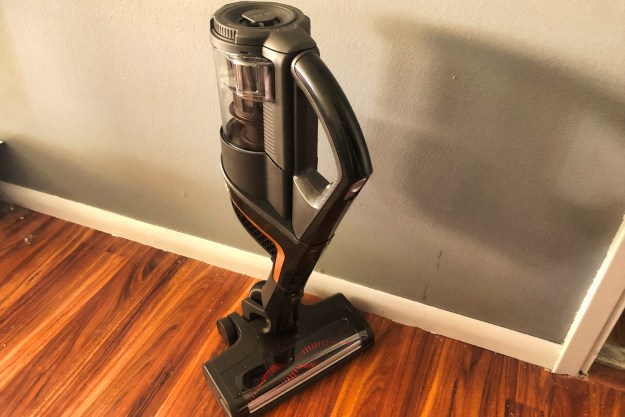 Bagless vacuums are notorious for puffing dust back into the air when they’re being emptied. In 2016, Miele promised its bagless vacuums wouldn’t do that. Four years later, I finally got one to test out, the Triflex HX1 Cat & Dog.

This cordless stick vacuum is modular and can be assembled in a few different ways, including a handheld device. Miele said it’s made for pets, so I set it on my cat tree.

For my current vacuum, I have a reusable grocery bag of accessories. Miele provides a wall mount for the HX1, which can also hold several of the attachments. I’m guessing there’s just no elegant way of storing the bulky handheld brush attachment, so that has to go on the floor next to vacuum.

In addition to the handheld brush and standard vacuum head, the Miele comes with a crevice tool, upholstery accessory, and dusting brush. Cleaning my cat tree took the handheld brush, upholstery accessory, and dusting brush. This isn’t the vacuum’s fault; my cat tree is a mix of carpeted platforms, squishy pillows, and a Papasan chair-style bowl for lounging. Great for cats, terrible for cleaning.

The reason the vacuum is called the Triflex is that it can be configured to be strictly handheld (to quote the Beastie Boys), or work in two different floor styles, with the bin closer to the floor or up near the handle. Swapping the different nozzles and brush heads is mostly easy, but detaching the wand that lengthens the vacuum handle could sometimes take a bit of tug of war.

With the dust bin, motor, and battery, the vacuum weighs around three pounds, sans attachments, which don’t add too much heft. It’s definitely manageable but might get fatiguing for people used to only using a hose with an attachment. There’s no getting around having to hold the entire vacuum when you’re using it like a dustbuster.

The handle of the HX1 lets you select between three power settings. Let’s face it, though, the only time you’re probably not going use max power is on delicate rugs. The max setting lives up to its name and sucked up everything in sight. The handheld brush worked great on the cat tree platforms, which are usually a bit tricky to clean. The dusting brush and upholstery tool did better on the softer surfaces, like the cushions, where cat fur abounded. It still took time and patience, going over the furrier areas several times, but the tree was far less furry after the vacuuming.

In addition to the cat tree, I also tested the Miele on carpet and hardwood flooring, with a variety of substances, including rice and cereal. With some vacuums, I’ve found that vacuuming can ping little pieces of debris across hardwood floors. Not so with the HX1. It kept everything contained, even if it did struggle with — admittedly, bulky — fully intact Golden Graham squares. It picked up nearly everything else though, doing an impressively thorough job.

The max setting lives up to its name and sucked up everything in site.

The vacuum’s standard brush head has a low profile, which fits really well under my bookshelves and console table, which sometimes are too low for taller vacuum heads. It’s also equipped with a headlight, for when you shove it into those dark corners.

It took about 12 minutes to fully clean the cat tree. The HX1’s battery only lasted around 16 minutes on max. That’s a bit on the short side, compared to some competition, and there’s no backup battery for bigger jobs. On low-power mode, the battery will last about an hour. The longevity is a bit shorter than another direct rival, the Dyson V11 Outsize, which stretches out to a slightly longer 65 minutes of cleaning time on eco mode in our real world testing. It takes four hours to recharge the battery, which is pretty standard for cordless vacuums. However, it’s worth mentioning that the pro version of the vacuum ($800) comes packaged with two batteries.

With my own bagless vac, I usually take it outside before emptying it into the garbage. It emits a plume of dust, redistributing the very kitten dander I was trying to banish in the first place. The HX1 certainly had large particles in the bin when I was done vacuuming, but when I opened it to empty it out, that poof of dust was absent. The filters — which you clean by removing them and knocking them against the walls of your trash can every month or so — really do seem to keep everything contained.

Everything about the HX1 is pretty petite, including the dust bin. It holds about half a liter of dirt and other refuse. The capacity is good enough for apartments or studios, but will require frequent emptying with larger homes. The Dyson V11 Outsize, for example, features a substantially larger 1.8-liter dustbin. Opening the bin happens with a twist of the bin at the top, a bit different from most other vacuums. You’ll probably have to read the manual the first time to figure it out, but it’s pretty easy thereafter.

The $699 price tag puts the Miele Triflex HX1 Cat & Dog vacuum on par with some high-end Dyson stick vacs. Its battery life is on the short side and it can get heavy in handheld mode, but it’s a very powerful, easy-to-use vacuum. And that lack of a dust cloud? *Chef’s kiss.*

Great as the HX1 is, Miele’s price tag is simply too high for many people. There are certainly less expensive stick vacuums, like the Dyson V7 ($288) or Tineco Pure One S12 ($530).

Consumer Reports has found that cordless vacuums have iffy reliability, thanks to their diminishing battery life. The HX1 is otherwise well constructed and comes with a one-year warranty.

If you have a fairly small home that you can vacuum in around 15 minutes and are looking to spend several hundred dollars on a cordless device, the HX1 is a great choice. It’s powerful, versatile, and doesn’t take up too much space.