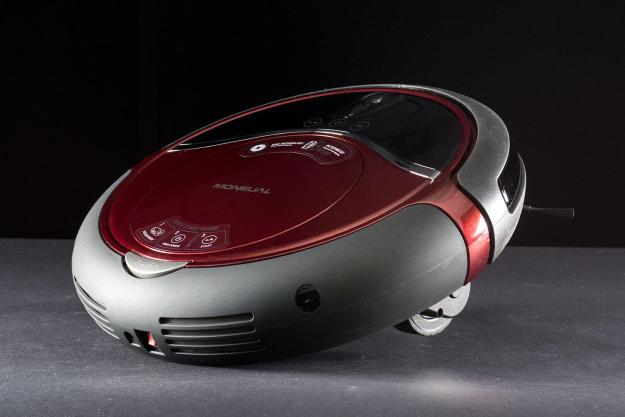 “Thanks largely to its advanced navigational abilities, the Rydis H68 Pro is an extremely capable and versatile robot -- and at just 500 bucks, it's also a great value.”

Moneual’s flagship vacuum bot is an enticing little device. For hundreds of dollars less than the cost of other top-of-the-line vacuum robots, it promises not only to clean your floors, but mop them too. This little guy pulls double duty for a fraction of the cost of other less-capable bots, and also boasts a slew of advanced cleaning features you can’t find elsewhere. It almost sounds too good to be true, so we got our hands on one and took it for a spin to see if it’s as awesome as it sounds on paper.

Getting started with the Rydis H68 Pro is ridiculously easy. Once you’ve got the brushes attached and the battery charged up, you only need to hit one button to have the bot start vacuuming your floors. That being said, however, this easy start mode also happens to be the most basic cleaning mode the bot has to offer. Accessing the H68’s extra functions, such as scheduling and advanced cleaning modes, is a bit trickier. We found that the physical control interface located on the bot’s hull was a tad confusing at first, and we often had to consult the manual for the first couple weeks we used it, but we managed to get the hang of it shortly thereafter. In most cases, we don’t even recommend you bend down to mess with settings on the faceplate. Instead, just pop some batteries in the remote control and do everything that way — it’s much easier.

The H68 Pro isn’t your average vacuum bot. Not only will it gobble up dirt and debris on your carpets; it also functions as a mop, and will scrub hardwood, tile, or laminate floors. Unfortunately though, the bot can’t seamlessly transition between these different functions. If you want it to go from vacuum mode on your living room carpet to mopping the kitchen floor, you’ll need to stop the bot at some point in the cycle, attach the included wet or dry brush to the underside, and then start it back up.

This bot has more features than you can shake a stick at.

Switching between different cleaning styles does require a small bit of manual labor, but that can hardly be considered a drawback. Most other vacuum bots can’t pull double duty like this, so even though operation isn’t completely hands-off with this thing, the fact that it can perform multiple functions is still a massive plus.

In addition to multiple cleaning styles, Moneual also outfitted this badboy with its Smart Vision Mapping technology, which gives it pretty exceptional navigational abilities. Instead of bouncing around your walls in a completely random fashion, the Rydis scans the room and plans a highly efficient cleaning route. It’s a pretty awesome feature, because not only does this advanced area mapping tech allow it to clean your floors faster, but it also makes a number of other cleaning modes possible.

On top of the regular cleaning mode, the Rydis H68 Pro comes with a handful of more thorough modes like Intensive Cleaning, where the bot starts from the center of a dirty area and spirals outward; as well as Deep Cleaning, where it covers the room twice in overlapping vertical and horizontal patterns. There’s even a Double Deep Cleaning mode that covers the same area four times if you really want to make sure a room gets clean. And if you’re in a hurry, there’s also a Turbo setting that’ll get the job done in half the time.

Overall, this bot has more features than you can shake a stick at, and all of them are highly useful. There’s nothing extraneous or unnecessary on the H68, yet it  still provides enough options to satisfy even the most demanding users, leaving us very impressed.

To test this badboy out, we ran it through the exact same testing gauntlet that we put iRobot’s Roomba 880 through – but also added a few rounds to put its wet/dry mopping chops to the test.

To start, we simply let it run loose around the office for a few days to assess its range and navigational abilities. Unlike Roomba, which bounced around haphazardly and often died before it managed to find its way back to the charging spot, the H68 Pro tackled the room methodically, making sure to finish one zone before moving on to another. This more efficient approach seemed to extend the range of the bot substantially, and thanks to its improved navigational abilities, the H68 almost always made it back to the charging station. The only time it faltered was when it got choked up on something and had to stop vacuuming.

After putting the bot’s range and navigation to the test, we moved it to a smaller room to run it through some vacuuming trials. For this, we cleared out a room and gave it a twice-over with a traditional vacuum to ensure our testing area was sterile. After that, we pulled in some furniture and set up a few obstacles to simulate the layout of an average living space. Once we had the room all set up, we whipped up a mixture of dirt, debris, and a bunch of other horrible stuff in a wide range of different sizes in textures. There was fine dust, coarse dirt, long hair, short hair, flat bits (oatmeal), chunky pieces (granola, cheerios), and even a couple Nerf darts just to keep things interesting.

We measured out 70 grams of this mixture and scattered it all over the room. Then, equipped with a full charge and an empty dustbin, we let the Rydis do it’s thing on the “normal” setting. When we came back to find the bot finished and docked at the charging station about half an hour later, we pulled it off and weighed the contents of the dustbin. Surprisingly, despite its methodical approach to covering the room, Moneual’s bot only picked up 60.4 grams of gunk on the first trial. Upon closer inspection of the room, we found that it had actually missed a few of the harder-to-reach spots we scattered dirt in, which likely accounted for a large portion of the remaining weight.

In comparison to iRobot’s top-of-the-line Roomba, the Rydis H68 picked up a bit less dirt and debris — but it’s worth noting that it did so in far less time, and only covered the test area once. When we ran the same experiment with the bot on the more thorough “Deep Cleaning” setting, it picked up 68 of the original 70 grams of dirt, and managed to reach a few spots it didn’t get to in the first trial. It is worth noting , however, that we had to rescue the bot a couple times when it choked on Nerf darts and got its brush tangled up with hair.

Mopping performance was similarly impressive. The bot won’t scrub off substantial gobs of gunk you’ve got caked to your floors (you’ll have to handle those yourself, and ewww), but it does do an excellent job keeping an already clean floor looking great. When it’s in mopping mode, the bot uses its advanced navigation system to go about the floor in a back-and-forth sweeping motion, so as to avoid leaving piles of wet debris on the floor anywhere. There’s also a hybrid vacuum/mop function that simultaneously sucks up big chunks with the vacuum and picks up the smaller stuff with the mop, which is pretty nifty. It basically saves you from the trouble of sweeping before you mop.

If you want the most bang for your buck, the Rydis H68 Pro is the bot to get. For just $500, it packs in more features and functionality than any other vacuum robot we’ve tested, and it does an exceptional job at cleaning floors. It has a slightly steeper learning curve than some of its competitors, as well as a smaller dustbin, but the bot’s advanced navigation abilities and diverse range of cleaning modes easily make up for those shortcomings.  At the end of the day, what really sets the H68 Pro apart is Moneual’s Smart Vision Mapping technology (which boosts the bot’s efficiency in a big way, and makes all of its different modes possible), and the included mopping function. To get this kind of functionality, you’d normally have to buy two separate robots, but Moneual offers it all in one package.