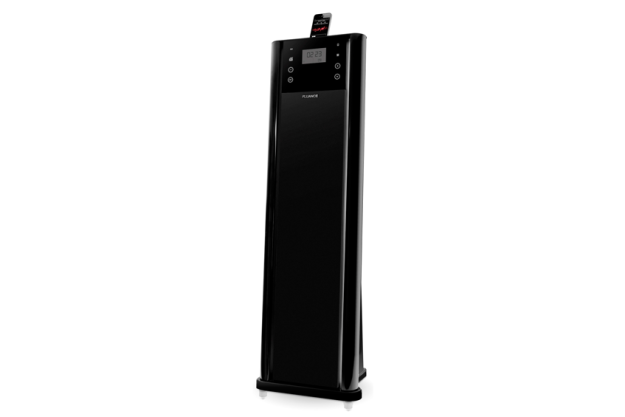 “Unless you really had your heart set on the sheer physical ginormity that is the Fluance FITSD600, we strongly recommend looking elsewhere.”

With most iPhone and iPod docks on the market looking awfully similar these days, several manufacturers have created some unique-looking docks that visually set themselves apart from the crowd. Designs such as the Bowers and Wilkins Zeppelin and JBL OnBeat Xtreme come to mind. Both of those are also of the compact and portable variety, which seems to be dominant category of docks available. After all, most manufacturers are probably thinking that if you can take your iPod with you, you should be able to take your dock with you, too.

Not so with Fluance, which has gone in the opposite direction with its FITSD600 iPhone/iPod dock. It’s definitely one of the biggest docks we’ve yet laid hands on. And in case its tall, imposing design isn’t already a clue, the Fluance dock is intended to deliver huge in-home sound, bigger than your typical portable sound dock. We decided to put the FITSD600 through its paces to see if it delivers.

The Fluance FITSD600 came well-packed and double boxed with dense foam and cardboard inserts, and consequently arrived to us intact and unscathed. As previously mentioned, the FITSD600 is positively huge, so wrestling this thing out of its box was no small feat. Luckily, the Fluance dock features a grab handle on the back of its case that, once de-boxed, made maneuvering this 40-pound beast a snap.

After pulling out the dock, we took notice of its gloss piano black paint and curved side rails. While the paint did have some “orange peel” effect to it, it was mostly relegated to the back of the unit. The upper front section features a generic LCD display and playback controls. There’s also a removable grille at the front that hides the sound dock’s drivers. The top cap is apparently made from a piece of reflective, glossy metal; we know that because we had a heck of a time removing the adhesive-backed protective piece of paper that was stubbornly stuck to it.

Inside the box, we found some other items packaged inside, including: two 1-inch isolation floor spikes; a remote control; six iPod/iPhone dock adaptors; one 3.5mm to RCA Y-cable; one RCA video cable; and an FM and AM antenna.

Once we got it set up, we couldn’t help but continually take notice of the FITSD600’s imposing, in-room presence. In fact, at nearly 40 inches tall and 13 inches wide, it’s literally bigger than any home audio loudspeaker we currently have on site. Even after weeks of living with it, our eyes still went immediately to the Fluance dock every time we walked into the room. If what you’re looking for is a sound dock that always draws your attention to it, then brother, you’ve come to the right place.

The FITSD600 makes the most of its internally-braced, built-from-MDF-form by including some bona-fide, full-size speaker drivers. There are five of them in total, including dual 0.8-inch silk dome tweeters with neodymium magnets, two 3-inch midrange drivers, and one 6.5-inch “subwoofer.” Other front panel items include source selection and volume controls and that generic-looking LCD display we mentioned.

Around back, the Fluance dock also features a flared bass-reflex port, along with a set of left and right RCA auxiliary inputs, an RCA video output, captive power cord, and antenna inputs. Those antenna inputs are for the built-in AM/FM radio tuner, a nice addition that’s becoming harder to find in today’s digital-only audio components.

Fluance lists the FITSD600’s RMS amplifier power as “36 watts continuous average output,” though Fluance is unclear whether that’s the total power output or for a single channel. If we had to guess, we’d say total, since most manufacturers are all too eager to tell you when there’s more power on tap. Frequency response is listed as 30Hz-20Khz +1/-3dB, though that seems wildly optimistic at best, and deliberately misleading at worst: There are countless true subwoofers measuring 10 inches in diameter that have a tough time cleanly reproducing frequencies that low.

Other than the requisite iPhone/iPod docking platform on top, the remote control, and some bass and treble controls, there aren’t any other features to speak of: no AirPlay, Wi-Fi, or Bluetooth wireless connectivity, no headphone output, and no networking or USB connectivity. Given that more and more sound docks are going the networking and wireless routes and include plenty more features, we’re curious as to why Fluance chose to neglect these options.

Also, we should note that we felt the Fluance FITSD600’s design and appearance left a lot to be desired. The sum effect of the basic controls, plain-Jane black finish, and cheap clock radio LCD display just left us feeling very ho-hum about it. Add that up with the visually-imposing stature, and you have a ginormous, gloss black tower that’s hard not to notice yet difficult to look at.

The Fluance FITSD600 sounded awful out of the box, so we let it break in for over 20 hours before we did any serious listening. But even after break-in, we couldn’t help but feel underwhelmed by what we heard. Maybe it’s because the FITSD600 is physically so huge. Or maybe it’s because we were initially smitten by that solid MDF cabinet and those full-size speaker drivers. Whatever the reason, we really expected the sound be a lot bigger than it was. We expected it to completely fill our smallish (12- by 16-foot) room with groovy tunes, and rightfully so, we think. We’ve heard much smaller docks sound much, much bigger than this huge-ass Fluance dock, so we’re puzzled by the small sonic picture we got from it.

Oh, the FITSD600 certainly played loud enough, no doubt about that; it just didn’t have nearly the dispersion or scale to the sound we were expecting. No matter what music we played, or how loudly we played it, the sound always seemed to come directly from the center of the Fluance dock.

Once we got past that, we tried focusing more on the sound’s quality instead of its quantity, but we had a really tough time with that, too. Whenever we tried listening to the Fluance dock purely for enjoyment, we found ourselves wanting to turn it off. If we had to guess, we’d say the most immediate culprit would be the uneven, tizzy and bright character of the FITSD600’s treble. Cymbals, bells, and other higher-pitched percussive instruments all sounded much too hash and distorted when the Fluance was able to reproduce them. Listening to one of our favorite tracks from Grizzly Bear’s older but gooder Veckatimest album, the opening keyboard’s upper registers sounded much harder and glassier than what we’re used to hearing, causing an inescapable urge to turn down the volume.

Moreover, that treble unevenness caused cymbal crashes to go mostly missing in action. That’s likely because what we actually hear from cymbal crashes is actually treble decay and harmonic information, and the Fluance dock seemed to clip most of this sonic goodness away from the music. Whatever the reason, the FITSD600 simply didn’t deliver.

Another culprit could have been the midrange. Female vocals that should have otherwise sounded silky smooth, such as Ella Fitzgerald’s rendition of “Too Darn Hot,” which sounded shrill at times with lots of unnatural sibilance emphasis. In other words, “Too Darn Hot” simply sounded too darn hot through the Fluance dock.

Or, maybe it was the bass. Regardless of our music choice, The Fluance FITSD600’s bass consistently had a boomy, thumpy, one-note quality to it. Kick drums sounded entirely too thick and muddy, and upright bass lost most of its pitch definition and clarity. Bass detail and “wallop” decay on “White Winter Hymnal” from Fleet Foxes’ self-titled album was largely absent, and bass-heavy recordings, such as D’Angelo’s Voodoo, were almost too boomy to be listenable.

Keep in mind the above comments are only valid when we could keep our iPhone 4 seated to the dock. No matter how hard we tried, we just never got a secure “lock” between our iPhone and the docking station. Whenever we got up to change a setting on our phone, it rocked back and forth enough to sever the connection between itself and the Fluance dock. We didn’t try any other iPods or dock adapters for auditory reasons — specifically, we’d had enough of the sound we were hearing.

We admire Fluance for what it tried to do here: create a huge, in-home, iPhone/iPod dock that sounds bigger and badder than any other dock available, all for a super-low price of only $350. Plus, we like that there’s real wood making up that internally-braced cabinet, and those full-size drivers would seem to have a lot of potential.

Unfortunately, the design wasn’t executed nearly as well as the idea. Overall, we just expected the Fluance FITSD600 to deliver…more. A lot more. And with wireless mobile device streaming quickly becoming the norm, we have to wonder just how long a purely physical docking product will remain relevant anyway.

When something looks as huge and imposing in your pad as the Fluance FITSD600, it had better sound equally big and attention-getting. Instead what we heard was something that sounded much smaller than it should have and consistently made us want to stop listening to our favorite music. Therefore, unless you really had your heart set on the sheer physical ginormity that is the Fluance FITSD600, we strongly recommend looking elsewhere.

Topics
Video-editing app LumaFusion to get a Galaxy Tab S8 launch
Peacock does away with free tier for new subscribers
Klipsch follows the success of The Fives with The Sevens and Nines powered speakers
Marshall’s latest Bluetooth speaker has four drivers for 360 sound
The best waterproof Bluetooth speakers for 2023
Is there a Sling TV free trial? Here’s what you need to know
What’s new on Apple TV+ this month (February 2023)
YouTube TV loses MLB Network and MLB.TV add-on
YouTube TV: plans, pricing, channels, how to cancel, and more
Apple’s MLS Season Pass is about more than just streaming games
Best 75-inch TV deals: Get a large screen for the Super Bowl
Flash sale drops the price of this 55-inch QLED 4K TV to just $370
Netflix expands its spatial audio, number of devices that can download content