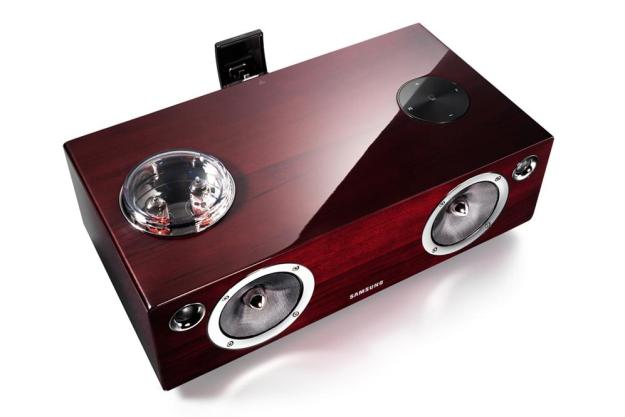 “We can’t think of a better sounding single-box solution than the Samsung DA-E750. Its convenience and sleek good looks set it apart and will offer a unique appeal to those who prefer simple, classy design and advanced functionality.”

It’s been five months since we first spotted Samsung’s DA-E750 at an unveiling in New York, which served as a coming out party for the company’s suite of new high-end audio products. The big news at the event: vacuum tubes.

That’s right. Samsung, a company nobody has ever taken seriously in regards to audio, decided it was time it changed its reputation and issued some audio products that would get it noticed. To do that, it took the vacuum tube — generally reserved for high-end consumer amplifiers and pre-amps as well as professional guitar amps — and integrated it into a couple of products aimed at today’s mainstream consumer. Samsung now offers a complete 5.1 home theater system and this, the $700 DA-E750 audio dock , both of which are outfitted with two JJ Electronics 12AU7 tubes (similar to those used in guitar amps) in the pre-amp section.

The way Samsung explains it, the job of the tubes is to inject their uniquely warm, rich, analog sound into the audio processing before the signal hits a powerful digital amp, presumably offering the best flavors from both the analog and digital worlds. Audiophiles contend that adding a tube’s harmonics will do wonders for any audio signal. But as much as we want to buy in, we can’t help but wonder if the gorgeous glow of the tubes isn’t as much for show as for sound. We aim to find out.

The DA-E750 is, by far, the sexiest audio product Samsung has ever made, and one of the most classically beautiful audio docks we’ve tested. As we cracked open the DA-E750’s box and slid off a protective sheet, we were greeted by a gorgeous, glossy, deep cherry wood cabinet finish. (A high-gloss black finish is also available.) A swift knock on the dock’s exterior resulted in a nearly dead “thunk,” indicating solid build quality.

At the top left of the dock we peered through a lightly smoked, circular Plexiglas window to see the DA-E750’s two 12AU7 tubes. A reflective trim plate installed near the tube sockets sets the tubes off in such a way that they take on a shimmering look, even when the dock is powered down. The presentation sure is classy.

In the box with the DA-E750 we found a 6-foot Ethernet cable, A/C power cord, remote control, a disc-style battery (CR2032 3v) for the remote, a polishing cloth, and a quick-setup guide.

The DA-E750 is the most connectible dock we’ve ever encountered. Located on the rear of the dock is a pop-out dual-dock, which features a 30-pin connector for iPhones, iPads and iPods and a micro-USB connector for use with Samsung’s Galaxy S II, Galaxy S III and Note. We also found an auxiliary input on the back panel, along with an Ethernet jack and USB 2.0 port. The USB port will allow for MP3s stored on a USB drive to be played, but it will not support WAV or FLAC files.

Those who prefer a wireless connection have plenty of options as well. The DA-E750 supports Bluetooth profile 3.0 with apt-X codec, Apple’s AirPlay, and Samsung’s own AllShare, which could come in particularly handy with certain models of Samsung smart TVs. A built-in wireless adapter can be easily paired with any WPS-enabled wireless router by pressing the WPS button on each device. No WPS-enabled router? iOS device owners need not worry: This dock will actually copy the network settings from your device so that it can access your wireless router — a pretty slick feature, if you ask us.

Two control options are available for those times when devices are hard-docked. A very simple display exists opposite of the tube bay on the top of the dock, offering play/pause volume up/down and an input selection button. This display also indicates which input is currently selected.

To advance tracks, mute audio, engage the bass boost feature, or power the unit up or down, use the provided remote. Here’s where we’ll bring up our first complaint: The remote’s quality does not match the dock’s. Its faux-metallic front and glossy plastic back feel cheap. Not only is that, but the spring mechanism securing the battery in place weak, allowing it to slide out of place and render the remote temporarily unusable. That was an issue for us several times during our evaluation.

The DA-E750 is outfitted with two midrange speakers with phase plugs, two silk dome tweeters, and a down-firing subwoofer which is ported to the rear. Samsung doesn’t disclose the driver sizes, but we measured the midrange drivers at 3.5-inches, the tweeters at .75-inches and the subwoofer at about 4.5-inches.

These speakers are driven by a digital amp that delivers 20 watts to each midrange/tweeter combination and 60 watts to the subwoofer. Confused? That’s understandable. Samsung does refer to the dock as having a vacuum tube amp but, technically speaking, it is a vacuum tube pre-amp. The amp that powers the speakers is digital. The tubes in this speaker dock simply serve to flavor the audio signal before it is amplified.

After giving the DA-E750 about 40 hours of break-in time, we sat down for a serious listen. Over the course of our listening evaluation, we used every available method of piping music through the DA-E750, be it wireless or docked, and threw a wide range of musical styles at it as well. In almost every case, this speaker dock did very well.

We queued up Jimi Hendrix’s “Bold as Love” and dug into the guitar solo while we patiently waited for the tune to take its psychedelic turn about three minutes in. During Hendrix’s solo, we noticed the DA-E750 was able to reproduce some of the busier moments in the song without ever getting muddled. Each instrument was reproduced with distinction and without any distortion. Later, as the song goes awash in trippy analog effects, we enjoyed the fact that the dock was able to deliver all of the analog grunge without sounding artificial.

We moved on to a much tamer Diana Krall and her treatment of “Let’s Face the Music and Dance.” Here, the DA-E750 showed us it was capable of reproducing Krall’s piano and delicate vocal with sensitivity, adding no uncalled-for sibilants to her voice and allowing her piano playing to come through with all its dynamic surprises.

Rodrigo and Gabriela stole the show with “Trivena” from the album 11:11. With this track, the DA-E750’s even-handed approach was apparent. The crisp transients from the plucking of guitar strings to the tapping of guitar bodies took on a very satisfying, organic flavor while the pounding, percussive bass thumped with just enough presence to be felt without overwhelming the rest of the frequency range.

More generally speaking, we found the DA-E750’s high frequency to be very much to our liking, if perhaps a bit laid back. The treble varied with each recording, but we’re happy to say that this dock is anything but bright. We never felt as if we missed any of the detail in the tracks we listened to, nor did we ever experience any listening fatigue.

Midrange response was well balanced and room-filling when called to be. Vocals were surprisingly clear and uncongested considering the size and scale of this system. And strings took on a pleasant woody character.

Bass was best when we stayed away from the “bass” button on the remote. Pressing the button engages a bass boost that is way over the top and, frankly, ought to have been left out of the processing entirely. There’s plenty of bass as it is. We can’t think of a situation where more would be needed, and we especially doubt that anyone would want their bass sounding so boomy and flabby. Without the bass boost, bass is tuneful and rounded out, with just enough punch to fill up the room with palpable low end.

Clearly, we liked the way the DA-E750 sounded. But how much of our enthusiasm is due to the inclusion of the vacuum tubes? Probably very little. The tubes may have helped soften some edges, and we’ll admit the combination with the digital amp works, but there’s a lot more to the sound than a couple of glowing tubes. Good drivers, an included subwoofer, adequate power, and a very well-built cabinet combine to make a great-sounding audio solution. The tubes just happen to add a terrific look and warm fuzzy feeling to the mix; and we’ll take it!

Considering the DA-E750’s price, the only other speaker docks we might compare it to would be the Klipsch G-17 Air and the Bowers and Wilkins Zeppelin Air. We think the DA-E750 bests both of them. Samsung’s dock sounds more balanced, is easier to set up and offers far more connectivity than the G-17, although it is much, much larger. Whether the DA-E750 bests the Zeppelin Air is going to be a matter of opinion. We happen to prefer the former, but no matter your opinion on sound, we think we can all agree the DA-E750 is the best looking and feeling speaker dock out on the market today.

There are better sounding solutions available for $700. A pair of Paradigm’s A2 active loudspeakers paired with an Apple Airport express would bring most of the DA-E750’s functionality and sound far better. With that said, we can’t think of a better sounding single-box solution than the DA-E750. Its convenience and sleek good looks set it apart and will offer a unique appeal to those who prefer simple, classy design and advanced functionality.