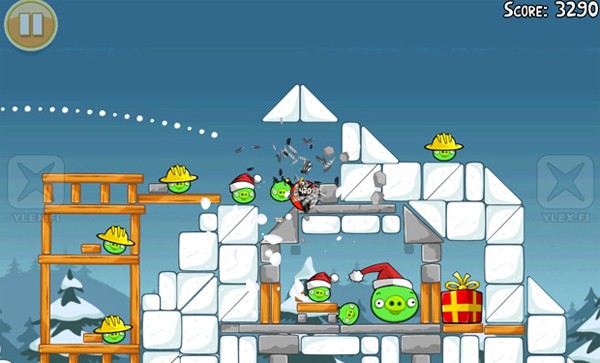 What better way to spread holiday cheer than by launching cartoon birds at oversized green pigs? How about if it all took place in a winter wonderland setting and the pigs were decked out in Santa hats? If that sounds like it might just get you in the holiday spirit, Finnish game developer Rovio has you covered. Following in the tradition of its Halloween release, the company has confirmed that it will be releasing a Christmas-themed version of its wildly successful Angry Birds game.

Last week, a Finnish website first leaked the news about the release prompting Rovio to confirm that it is indeed planning on releasing the holiday edition in early December as a free update to Angry Birds Halloween. The Halloween edition was released in October as a stand alone game exclusively for iOS devices and is still available for $0.99 in the iTunes App Store.

Android users recently converted to the Angry Birds craze won’t feel like they’re waking up to empty stockings this time around. Rovio has also indicated that it will be releasing the Christmas Angry Birds edition for the Android as well – presumably in a free, ad-supported form.

There are no details about what to expect from the Christmas edition, but if it follows in the tradition of the Halloween update you can expect new seasonally-themed sound and graphics and more than a few new levels. Just don’t expect anything close to a gameplay overhaul.

Rovio recently announced plans that to bring Angry Birds to the Xbox 360, Playstation 3, and Wii sometime in the near future. Unfortunately, those versions likely won’t be out by Dec. 25. But if you’re moved to give the gift of Angry Birds this holiday season, then we suggest checking out the lineup of “plush” Angry Bird toys offered through Rovio’s website.

Video-editing app LumaFusion to get a Galaxy Tab S8 launch
The best iPhone games in 2023: 31 games you need to play right now
How to get Apple’s Black History Month 2023 wallpapers for your iPhone and Apple Watch
Best cheap phones in 2023: our 5 favorite ones for tight budgets
The best iPhone apps in 2023: 50+ apps you need to download now
The best tablets for seniors for 2023
The best iPad keyboards for 2023
Is the Samsung Galaxy A14 5G waterproof?
The best fitness trackers in 2023: our 10 favorite picks
Watch the Galaxy S23 Ultra get unboxed a week before launch
The iPhone 15 Pro’s rumored new design is one I can’t wait for
The best folding phones in 2023: our 6 favorite foldables right now
You can finally take ECGs and track AFib on a Garmin smartwatch