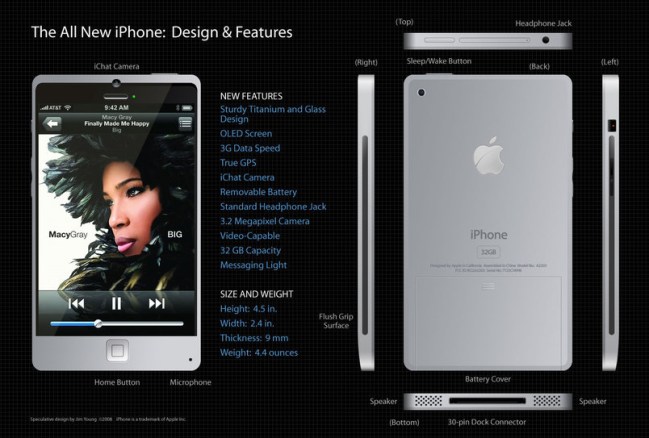 It looks like Apple might be busting out all of its new gear this spring, first the Apple tablet in in March and the perhaps a next generation iPhone in April. KT, an exclusive South Korean partner for Apple’s iPhone, told The Korean Times it plans to introduce an upgraded 4G version of the device this April. The anonymous sources from KT claims this new 4G iPhone will have an OLED screen, boast better graphics and dual-core processor, and have a video chat function. KT sources also eluded to a new removable battery and a higher resolution camera for the iPhone 4G.

The AppleInsider, says the pieces seem to be falling into place considering its report from last week of Apple purchasing a significant amount of LED camera flash components.  The AppleInsider thinks the rumored dual-core support for the iPhone 4G will probably come in the form of the new Cortex-A9 processor design from ARM, which are capable of breaking the 2GHz barrier.

As with all Apple news, unless it’s directly announced by Steve Jobs himself, it seems like a curious jigsaw puzzle. We’ll keep you updated on more iPhone 4G developments as they seep through the cracks.