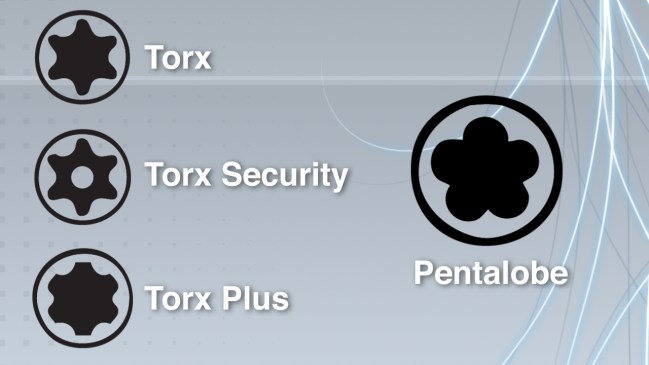 Apple is making it more difficult to take apart an iPhone 4. The company has begun replacing the common Phillips and Torx screws on iPhone 4s with its own proprietary screw design, according to a report by Reuters.

Apple repair technicians are reportedly switching the screws on iPhone 4s that are brought in for service to an Apple Store. And, according to the report, Apple is not informing customers about the screw swap. The practice began last fall and has since become widely adopted. The new screws, called “Pentalobe” screws by Apple’s own service manuals, were found in the iPhone 4 that first shipped in Japan.

The Pentalobe “tamper proof” screws will make it much more difficult for customers and third-party services to carry out repairs or replace batteries on iPhone 4s. Apple currently replaces batteries for free if an iPhone is still under warranty, but charges $79 if the phone’s warranty has expired.

Naturally, the people most upset about Apple’s screw policy are those who stand to lose money because of it. Kyle Wiens, CEO of third-party Apple repair company iFixit, responded with a blog post titled “Apple’s Diabolical Plan to Screw Your iPhone.”

Here’s some of what Wiens had to say:

“Apple is switching to a new type of tamper-resistant screw. This is not a standard Torx, and there are no readily available screwdrivers that can remove it. This isn’t the first time they’ve used this type of screw—it first appeared in the mid-2009 MacBook Pro to prevent you from replacing the the battery—and Apple is using a similar screw on the outer case of the current MacBook Air. This screw is the primary reason the 11″ MacBook Air earned a lousy repairability score of 4 out of 10 in our teardown last October.

“Apple chose this fastener specifically because it was new, guaranteeing repair tools would be both rare and expensive. Shame on them.”

Wiens says the new screws are now being included in new shipments of the iPhone 4. In the same blog post, Wiens announces that iFixit has begun offering an “iPhone Liberation Kit” for $9.95 that includes a screwdriver that works with the Pentalobe screws and replacement Phillips screws.

Is Apple tyrannical or just protecting their products? Is the iFixit solution liberty or just another way to make a buck?

Video-editing app LumaFusion to get a Galaxy Tab S8 launch
The best phones for 2022: Which smartphone should you buy?
Reverse wireless charging on the iPhone gets one step closer to reality
Does the iPhone 14 have an always-on display? Know this before buying
How to hide photos on your iPhone with iOS 16
Google wants you to know Android apps aren’t just for phones anymore
I have a confession — I may have been wrong about the Apple Watch Ultra
The best Samsung Galaxy Watch 4 screen protectors
Can’t stand using Instagram in 2022? This app fixes everything you hate about it
Apple AirPods Pro 2 vs. Google Pixel Buds Pro
These 80+ apps could be running adware on your iPhone or Android device
Stage Manager is coming to older iPad Pro models after all
Samsung just copy-and-pasted iOS 16’s lock screen in its One UI 5 beta