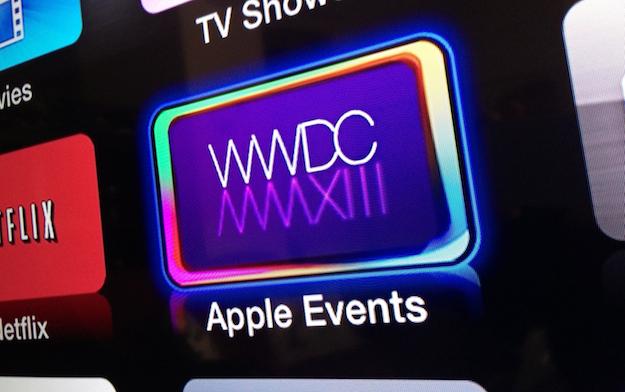 If the thought of having to wait until the official video of Apple’s WWDC 2013 keynote was released before being about to enjoy the proceedings was too much, then we’ve got some good news, as it looks like Apple will be streaming the presentation to Apple TVs.

Take a look under the channels on your Apple TV – an update may be required – and you should see one named Apple Events, complete with the official logo for this year’s WWDC event. Go deeper, and you’ll see the option to tune in live to the keynote presentation at 10:00am Pacific Time.

While Apple has been known to stream events in the past, it doesn’t do so normally. However, it did stream the iPad Mini announcement last October using the exact same Apple TV method. The WWDC keynote has always been the exception though, and security teams were always quick to shut down the unofficial feeds which often sprung up.

For the iPad Mini announcement, the Apple TV feed showed up a few hours before confirmation the event would also be streamed through Apple’s website, and we’re sure legions of Apple fans who don’t own an Apple TV will be hoping the same thing happens later today.

So what’s the reason for Apple’s change of heart? It could be due to the immense popularity of Google’s live streamed presentation which marked the beginning of Google I/O, helping Apple learn the importance of not shutting out its fans for events like this.

At the time of writing, a check of the Apple Events webpage doesn’t have a place holder for a WWDC 2013 live stream, but we’ll be sure to update you should one appear over the coming hours. Live stream or not, we’ll be bringing you all the WWDC 2013 news as it happens.

Updated on 06/10/2013 at 08:30 by Andy: The news keeps getting better, as Apple will also be streaming the WWDC 2013 keynote presentation online. You can find the link on Apple’s events website, and to view the video you’ll need to be using Mac OS X 10.6 or later, or an iOS device.