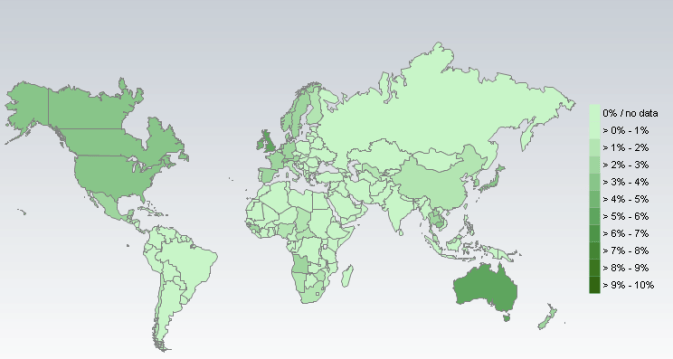 Apple’s iOS, the mobile operating system used by the iPhone, iPad, and iPod Touch, accounted for 2 percent of all Web browsing during the month of January, according to findings published by analytics firm Net Applications. It’s the first time that iOS has cracked 2 percent of global Web browsing. In Australia and the U.K. iOS fared particularly well, topping 5 percent of Web browsing traffic in each of the two countries. In Singapore the operating system fell just shy of 10 percent. In the U.S. iOS made up 3.4 percent of browser traffic. Net Applications noted iOS traffic picked up around the holidays, a typical trend for Apple products that are popular gift choices. Android’s Web browsing share was a relatively low .49 percent.

In other news from the front of the browser wars, Google’s Chrome browser passed 10 percent of global Web browsing market share for the first time during the month of January. Mozilla’s Firefox stayed relatively flat, maintaining a 22.75 percent share. Microsoft’s Internet Explorer 8.0 showed a big gain of 1.15 percent to remain atop the browser heap with a 34 percent share.

But if all versions of Internet Explorer are considered, the browser is gradually losing its share of Web browser traffic; from December 2010 to January 2011, IE dropped from a 57.1 percent share to 56 percent in January. There’s some silver lining for Microsoft, however, part of the overall decline comes as Microsoft actively is discouraging use of Internet Explorer 6.0 in favor of 8.0 and the forthcoming Internet Explorer 9.0.