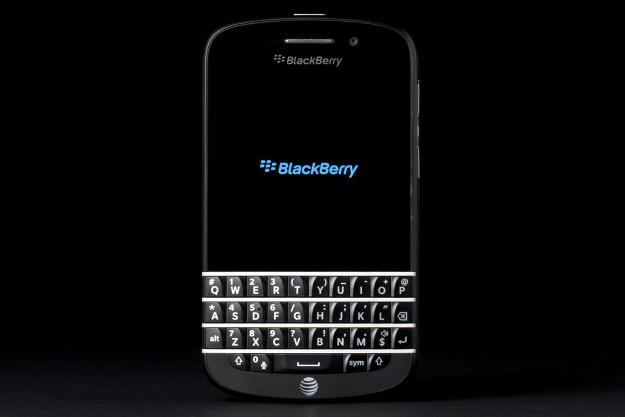 While the Z10 can be seen as BlackBerry’s bid to attract new, hip users, the BlackBerry Q10 should supposedly appeal to old-school BB lovers who are ready to dump their Bolds and Curves for something better. Instead of a large, all-touch experience, the Q10’s screen is small and half of the phone is dominated by a keyboard. It runs the Canadian tech company’s latest and greatest OS: BlackBerry 10.1. The question is whether the interface that runs so well on a larger, touch-only device will also work on a half display, half keyboard phone? The answer depends on whether you’re willing to dive deep into the Q10’s many layers of functionality and keyboard secrets.

Comfortable to hold, but the screen is small

Set on a shelf next to the latest crop of voluminous Android phones the BlackBerry Q10 comes off as Liliputian in comparison. The perception is somewhat misleading though the compact size serves the Q10’s purpose; it’s built for efficiency. You won’t need to stretch and strain your thumb to reach anything. Most will be able to reach across the 3.1-inch screen while holding the Q10, all with one hand. While typing, it doesn’t take much stretch to tap and swipe the lower half of the display to activate gestures. This kind of thoughtful design is what BlackBerry used to be known for; it’s something usually only seen in products made by manufacturers with control over both hardware and software.

The Q10 feels comfortable to hold. The design is more streamlined than previous keyboard bearing handsets, eliminating elements like the trackpad and navigation buttons. It’s all about the display and the keyboard now; the power button up top and volume toggle/mute on the right are the only other controls. The Q10’s design is a refined version of a familiar BlackBerry experience.

The 720 x 720 pixel, 3.1-inch square screen doesn’t feel too small at first glance, especially since the narrow bezel allows the screen to command maximum attention when it’s on. It’s also pixel dense, a key factor in readability. BlackBerry 10 defaults to a text size of 8 and small fonts need to be crisp to be legible. That is not a problem here. The Super AMOLED touchscreen isn’t as bright as we’d like, yet is good enough for sunlight visibility. Colors pop and blacks are deep, as we’d expect with AMOLED. Viewing angles are generally good, though off-center a green tinge creeps in that’s really noticeable on light backgrounds.

As much as we like the overall size of the Q10 and the form factor, the display isn’t large enough to handle BlackBerry 10 effectively. Physical size is not the whole problem: the operating system itself needs tweaking to work better on it or owners will have to do the work of adjusting to the quirks (covered in-depth below). What saves this from being a dealbreaker is the excellent keyboard.

It is a truth universally acknowledged that people either love or hate physical keyboards. Those few people on the fence could be swayed by the Q10 as it boasts one of the better examples around. The keys sit in straight rows, not the curved/smile arrangement familiar from previous handsets, and are physically bigger. If you’re used to a BlackBerry keyboard the Q10 won’t trip you up one bit. Newcomers shouldn’t take too long to get into the groove, either, unless they have fingernails.

The keys are designed and shaped in a way that privileges pressing with the tip of a finger (not the pad) sans nails.

The keys are designed and shaped in a way that privileges pressing with the tip of a finger (not the pad) sans nails. Most men will not find this to be a problem, most women will probably find typing challenging at first. Thanks to matte coating and the aforementioned shaping, nails won’t go sliding off keys and it’s possible to be accurate. It’s just harder to get leverage to press the keys with a nail than with a fingertip, especially on the edges.

BlackBerry 10’s predictive text engine isn’t absent from the Q10 even though it’s less necessary when a physical keyboard is involved. Word predictions appear on the lower part of the display as you type and you have to reach up to choose unless the text turns green to indicate autocorrect. Having to reach up with the thumb doesn’t feel natural and slows typing in most cases. Speedy BlackBerry veterans will be better off disabling this feature. You’ll still get the autocorrected words either way.

Speed and efficiency are further helped by keyboard shortcuts for typing – ex: hold for capital and double tap space for period – and for navigating the interface. Under the menu settings of most apps you’ll see hints for keyboard shortcuts, but those only scratch the surface. There are over a hundred little keyboard tricks built in that are worth learning to increase efficiency. BlackBerry 10 might be made for touchscreens but the Q10 works best if you use hybrid input.

Learning the keyboard shortcuts will mitigate some of the issues with the Q10’s small screen while others are harder to deal with because of the way BlackBerry 10 works. (Read our full BB10 review for an in-depth breakdown of the OS.) The core of BB10 is gesture-based interaction that usually involves swiping up from the bottom, from the left, or down from the top. Because of the size of the display, the gesture-sensing zones take up significant space. We found that tapping an icon at the very top or very bottom of the screen didn’t always register because the Q10 didn’t seem sure if we were tapping or beginning a swipe. When scrolling up in the Hub, Browser, or a social media app, we often accidentally activated the swipe up to close app gesture. As you get used to the screen size, the incidence of that happening may go down.

We don’t like that navigation elements take up a significant portion of the screen in some apps and don’t hide themselves quickly or predictably enough. We’re also not fans of the browser experience. On non-mobile webpages text in the reading column stayed teeny tiny even when we zoomed in. You have to switch to the Reading mode or try to get the mobile version of the page to read without eyestrain.

The best aspect of BlackBerry 10 is the Hub, a true universal inbox that collates messages from email, BBM, social networks, chat, incoming calls, texts and more. The Q10 was made to take advantage of all the good things about the Hub. Even when some of the issues mentioned above creep in, the overall experience there is great.

The story on apps hasn’t changed much since the BB10 launch. BlackBerry World suffers from the same problem as any burgeoning app store: a ton of fluff and filler. That wouldn’t be so bad if more top-tier apps were here, such as TripIt, Yelp, and Netflix. Too many apps are pale knock-offs of better Android and iOS ones or don’t seem right for the platform. The apps that come pre-loaded on the device at least provide a solid foundation.

Though very different on the outside, the Q10 and Z10 are about the same inside. The Q10 runs on a dual-core 1.5GHz Qualcomm Snapdragon processor backed by 2GB of RAM and 16GB of internal storage. The back pops off to reveal SIM and microSD slots; the latter takes cards up to 32GB. Wireless connectivity radios include dual-band a/b/g/n Wi-Fi, Bluetooth 4.0, GPS, and NFC. Wired connectivity includes a microUSB port for charging and connecting to a computer and a microHDMI port for HD video output.

Just as with the Z10, the Q10 is powerful enough to run BlackBerry 10 smoothly with no lag or performance hiccups. If anything, the Q10 feels faster, potentially because the smaller screen requires less oomph or the update to version 10.1 sped things up all around.

Our review unit is the AT&T model running on that carrier’s 4G LTE and HSPA networks. (The Q10 is also available from T-Mobile, Verizon Wireless, and Sprint.) While surfing the web, sending messages, and downloading apps, the network didn’t feel slow or sluggish and Speedtest.net recorded average speeds of 19Mbps down and 5Mbps up. During calls, voices came through the earpiece and speaker clearly and we only encountered a bit of static in a low bar area. Our voice came through loud and clear on the other end as well in quiet and semi-noisy situations.

The speaker that sits on the bottom edge of the Q10 is well-placed; you’re unlikely to muffle with your hands. Overall audio quality is decent for a smartphone and loud enough to be heard over some background noise.

Thanks to the small screen and large 2100mAh battery the BlackBerry Q10 easily lasted over 14 hours of heavy usage, mostly centered around messaging and social network checking. Even with the screen on 100 percent brightness all day the battery outlasted us, showing 15 percent left when we went to bed.

Continuing the deja vu, the 8-megapixel rear and 2-megapixel front camera on the Q10 are the same as the Z10. The images it produces aren’t as good as the ones we coaxed from the Z10. There’s more noise in mixed light shots and little crispness or detail in outdoor pictures. We’re glad that the BlackBerry 10.1 update brought HDR to the feature set since there aren’t many at hand. It balances shadow and bright light better than Auto but requires a very steady hand. There’s no shutter icon in the camera app; to snap a picture you have to tap the display or press the space bar. Both of these options are awkward – the spacebar less so – and we had a hard time getting blur-free shots because of that.

Around front, the 2-megapixel camera is still above average for smartphones and captures good enough images that the person on the other end of BBM video chats won’t see a strange, overly pixilated version of you. Just stay in good lighting; neither camera does well in low light.

Even though it doesn’t have a giant display, the BlackBerry Q10 may prove more interesting to mainstream users than the Z10. After all, there are a million touchscreen smartphones in the world. There aren’t many phones with good physical keyboards (and the competition mainly consists of other BlackBerry devices). And the main reason why most want that good keyboard is because they spend most of their time messaging; if nothing else, BlackBerry 10 is made for that type of person and the Q10 is made to deliver the best experience around messaging. For people who prioritize this above everything else, including good apps, the Q10 is a good buy. Just be aware that in order to get the most out of it, you’ll need to invest some time in learning the tricks and shortcuts.