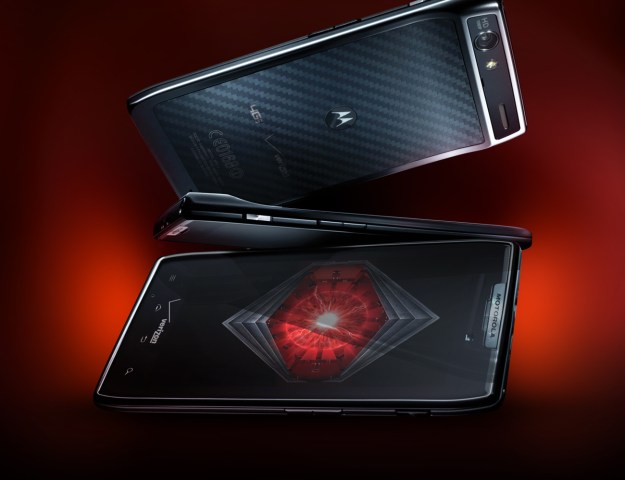 October 18 is a date that most Android fanboys have circled on their calendars, first Motorola is hosting a press conference and then later in the night Google and Samsung are hosting an event in Hong Kong. It is assumed that Motorola will be announcing the Xoom 2 tablet and a phone called the Droid RAZR. Droid-Life was able to find a leaked press image of the Droid RAZR, and we are catch a glimpse at just how thin this phone is.

We have seen images of the Droid RAZR before when it was called the Droid HD, but this new image is official and shows off just how thin the phone is. It better be thin seeing how the tag line for Motorola’s press conference is Faster, Thinner, Smarter, Stronger. The leaked information we have for the RAZR seems to be true to those claims. The RAZR is rumored to house a 1.2GHz dual core processor, 1GB of RAM, LTE antenna, and 8MP camera. The phone is also supposed to have a gorilla glass screen, be wrapped in Kevlar, and be splash resistant to meet the “stronger” claim.

It wouldn’t be a true RAZR phone unless it was insanely thin, so much so that it better be one of the slimmest phones on the market. The fact that it is an LTE device worries us that it might not be as thin as we hope, seeing how the Droid Bionic is currently the thinnest LTE phone and is 11mm thick at its thinnest point. To put that number in context the iPhone 4S is 9.3mm thick, and the original Samsung Galaxy S 2 is 8.49mm thick so the RAZR has some work to do to catch up to those two.

It seems odd to us that Verizon would carry both the Droid Bionic and Droid RAZR, as it seems that there is not much difference between the two phones. Both have a 4.3 inch screen, dual core processors, and LTE radios. It seems as though the RAZR could make the Bionic old news even though it hit the market just over a month ago.