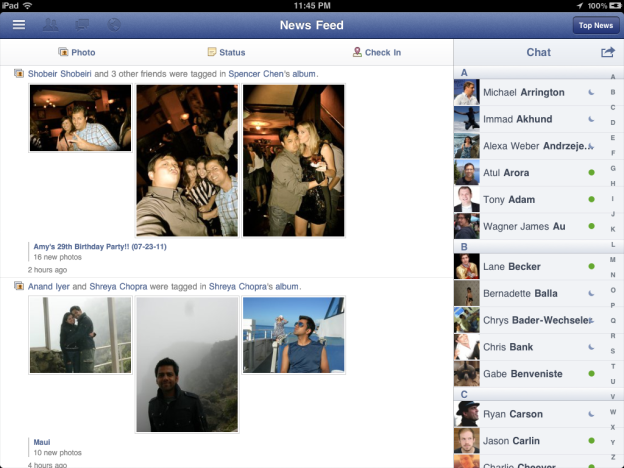 After holding out on iPad users for what’s been an interminably long time, we’ve finally gotten a glimpse of the Facebook iOS tablet app – which may have been against the social network’s wishes. This weekend an engineering student digging around the Facebook iPhone app discovered the iPad app code hidden inside, and TechCrunch was among the first to get a look at it in action. The student who originally found the app, a self-described “iOS enthusiast,” noticed the code after Facebook pushed an update to its iPhone app. The newest version of the app included the iPad app code, which can be run if you’re willing to do a little work and take a couple risks.

From the initial glimpse, the app appears to be quite polished and intuitive. If you’re planning on running it, you’ll have to jailbreak your iPad and put up with some glitches and occasional crashes, but you would be among the first to give it a try. From the sounds of it, this is the version Facebook plans to introduce, most likely with a few finishing touches to work out the remaining bugs.

So when is Facebook going to announce the app? When the social network announced its video chat feature last month, CEO Mark Zuckerberg remarked that it was the beginning of a launch season for the company, and that over the coming months we would see a number of products. Hopefully you don’t have to wait too much longer and risk succumbing to the lure of jailbreaking your iPad.

The jailbreak to run the secret Facebook iPad app is no more. A block has been issued, and while you can try the work-around, you won’t be able to login. Now the wait for the real thing begins.

Video-editing app LumaFusion to get a Galaxy Tab S8 launch
Experts say the iPhone 14’s satellite feature may have a dangerous side effect
How to use iOS 16 photo cutout to cut and paste images
How to change the time font on your iOS 16 lock screen
Which $1,000 phone has the better camera — iPhone 14 Pro or Galaxy Z Flip 4?
Everything (and we mean everything) to know about 5G on the iPhone
OnePlus 11 Pro leaked specs predict a zooming disappointment
How to turn off your iPhone 14 Pro’s always-on display
Does the iPhone 14 Pro have a battery life problem? It sure looks like it
Your guide to the best e-book readers for 2022
How to delete lock screen wallpapers in iOS 16
iPhone 14 Pro vs. iPhone 13 Pro camera battle isn’t as close as you think
The best gaming tablets for 2022