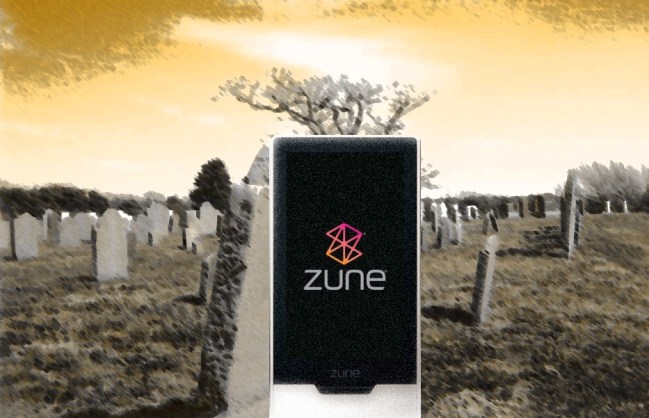 It’s been a long time coming. Following whispers for some time now that Microsoft has been in the process of moving Zune to the great beyond, today Bloomberg has confirmation of those rumors. According to the site, Microsoft will terminate all production of new Zune music and video players due to a lack of demand. At the same time, an insider says the company will be shifting “its focus to other devices.”

Last month, Microsoft failed to make any mention of Zune at Mobile World Congress, creating suspicion that the iPod rival wasn’t long for this world. But Microsoft tried to downplay any rumor of Zune’s termination, directly saying “Zune is not dead” and even throwing in a bold “[and] will never die!” for good measure.

But we’ve all seen this coming. Microsoft hasn’t released updated Zune hardware since 2009, and the recent buzz surrounding a cloud-based multimedia project codenamed “Ventura” could be the music-host-meets-social media follow-up to the failed PMP. Whatever Ventura’s purpose is, though, for the time being Zune software will live on. It will be integrated into Windows Phone 7 devices and Xbox 360 consoles. A company statement would only go so far as to say, “Our long-term strategy focuses on the strength of the entire Zune ecosystem across Microsoft platforms.”

The Zune never reached Microsoft’s expectations for it. The company believed it could ably compete with – and even threaten – the success of the iPod. And while it found a following of Apple-loathing, Windows loyalists, it never managed to pull in the type of numbers the iPod was able to in its sleep.

Zune, you had a short run at it (a measly five years), and it feels we hardly knew ye. Now, we’re going to continue and keep our ear to the ground for work on the inevitable (we hope) success of the Windows Phone update and perhaps more on what exactly Ventura will become.

Topics
Video-editing app LumaFusion to get a Galaxy Tab S8 launch
Hive Social is my favorite Twitter alternative, but that’s not saying much
Surprisingly, the iPhone 14 Pro can’t win this epic camera shootout
5 Apple gadgets you really should avoid this holiday season
Best Black Friday iPad Deals: iPad Air, iPad Mini, iPad Pro
This 10-inch Lenovo tablet is $129 for Cyber Monday (selling fast)
Save $200 on the Samsung Galaxy Tab S7+ with S Pen for Cyber Monday
The best smartphone stocking stuffers for the 2022 holidays
Don’t buy the wrong iPad during Cyber Monday — get this one instead
Samsung’s Galaxy Buds earbuds line is discounted for Cyber Monday
Audible Cyber Monday deal drops the price of Premium by 60%
This is your last chance to get 3 months of Kindle Unlimited for just $1
My favorite iPhone MagSafe in-car holders are Cyber Monday bargains