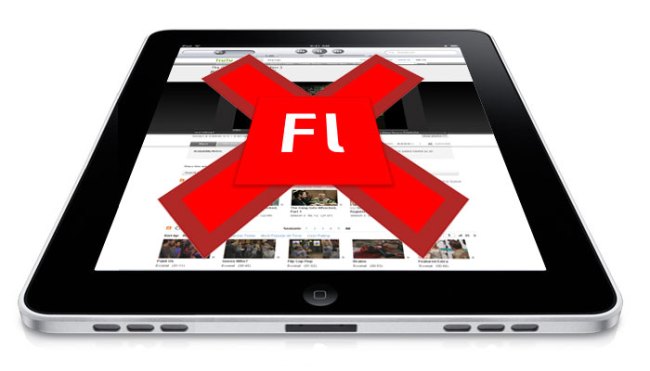 When Steve Jobs plopped down on a carefully-placed chair to show off the new iPad’s “Internet in your hands” Web surfing capabilities on Wednesday, a white elephant barged onto stage with him very quickly. A large chunk of the New York Times’ site showed up as a blue brick plastered in question marks – a sign iPhone users will immediately recognize as the placeholder for missing Flash content.

Whoops. The iPad doesn’t support one of the most powerful and ubiquitous content formats on the Web.

Despite a hotrod 1GHz processor that should run Flash content with ease – especially considering many smartphones already can – Apple has intentionally snubbed the format to keep its app-like capabilities under lock and key. That means no It’s Always Sunny in Philadelphia from Hulu.com, no streaming episodes of Matlock from CBS.com no tirades from Eric Cartman at SouthParkStudios.com and no Flash-based Web games for users at all.

“It looks like Apple is continuing to impose restrictions on their devices that limit both content publishers and consumers,” wrote Adobe’s Adrian Ludwig after the announcement. “Without Flash support, iPad users will not be able to access the full range of web content, including over 70% of games and 75% of video on the web.”

Even so, the company realizes the potential market it has been intentionally barred from, and has attempted to break in. In the wake of the announcement, Adobe was quick to point out that its Packager for iPhone software would allow Flash developers to slide their applications onto the iPad by repackaging them as apps, the same way it works for the iPhone. It’s a clever workaround, but since developers have to take the initiative to make the port – still not equivalent to Flash on the iPad.

Scott Alexander, senior editor at Playboy, believes the lack of Flash will be a major hurdle for the iPad. “One of the big things this device is predicated on is browsing the Internet.” he says. “You use Flash all the time as an Internet user. There are gaping holes in the Internet when you try to browse without it.”

Beyond games and applications, Alan Stoga,, CEO of publisher FLYP, believes the lack of Flash could also impinge on the iPad’s reputation as an e-reader. “The challenge is not simply to make magazines and newspapers accessible on mobile, digital platforms with decent screens, but to make their content available in true multimedia format,” he said. “That requires Flash or something like it.”

Although the initial wave of adopters might be willing to overlook Flash for the time being, the format’s continued growth in popularity – Steve Jobs couldn’t even avoid bumping into it in his demo –might make the Apple’s claim of putting “the Internet in your hands” a tough sell as time goes on.