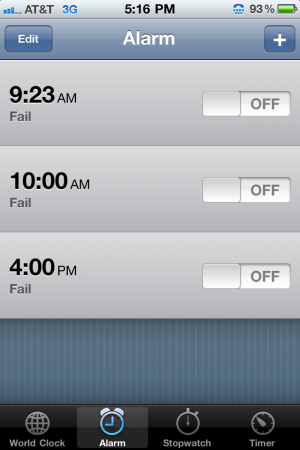 If too much New Years revelry weren’t enough to foil thousands of morning plans this weekend, a bug with the iPhone did the trick. Mirroring November’s European daylight savings time hiccup, a known glitch in iOS caused phones with one-time alarms set for January 1 and 2 to fizzle, leaving iPhone users oversleeping throughout the country.

Engadget forewarned of the bug on New Years Eve, but Apple failed to respond with a patch in time and alarms failed to go off the next morning as predicted – then again on Sunday.

“We’re aware of an issue related to non-repeating alarms set for January 1 or 2,” Apple responded in an e-mail to news outlets. According to the company, alarms will begin functioning properly again on January 3, even without a patch.

Need an alarm for the remaining hours of January 2? Apple recommends setting a recurring alarm, which won’t be affected by the bug, then deleting it after it goes off.