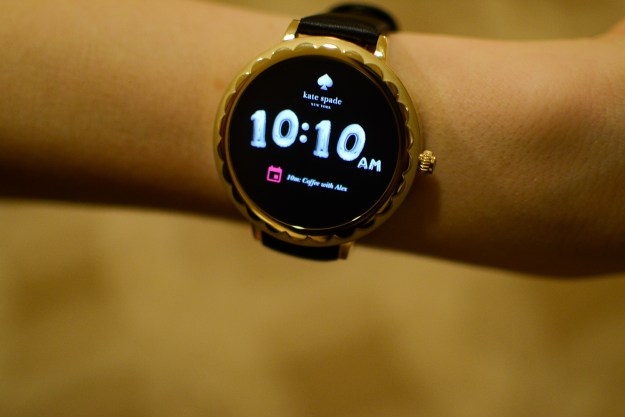 “Kate Spade has instilled its own quirky sense of fun into the Scallop smartwatch to give it mass appeal.”

Kate Spade, a well-known and very tech-forward fashion brand, has announced its first touchscreen Android Wear smartwatch. It’s the Scallop, and it’s the latest entry on a growing list of wearables for women, all spurred on by our desire for better looking and more stylish gadgets you’ll want to put on each day. In our Kate Spade Scallop hands-on review, we’ll look at how it distinguishes itself from the rest of the smartwatch competition. It’s worth pointing out at this stage that I’m not a woman, and therefore I may not be the best person to judge this watch’s appeal. That may be the case; but I do still know smartwatches and watch design. To me, the Kate Spade Scallop is one good looking watch, made by people who understand them.

Why? It’s the little details. Having spoken to Kate Spade ahead of the watch’s launch, the many design flourishes inspired by the company’s own iconic motifs are what make the Scallop unique. The name comes from the scalloped edge of the bezel, which catches the light beautifully, and the current strap line-up all correspond with the company’s most popular colors. We really like the small spade imprinted on the crown, the simplicity of the watch’s casing, and even the Kate Spade New York inscription on the clasp looks good. It’s all very well thought-out, understated, and really pretty.

The slim casing is a part of the Fossil Group’s new generation of watches, and it’s several millimeters slimmer than older versions. The introduction of these new cases prompted Kate Spade to add a touchscreen watch to its range, something it never wanted to do before. It’s not super slim like the same new generation hybrid smartwatches, and it’s still clearly a smartwatch; but the Scallop isn’t intrusive and could fit under a shirt sleeve. We think the design, however, is attractive enough that you’ll want to show it off — especially because it’s not just another lazy, pink and glittery smartwatch made for women by men.

Qualcomm’s Snapdragon 2100 platform powers the Scallop, and although we played with an early version, it zipped through the menus. We also liked the Kate Spade custom watch faces, a tool many companies use to make branded smartwatches stand out. Here, they’re in keeping with Kate Spade’s sense of fun, and each quirky watch face is cutely animated. A New York taxi zooms across the screen with the words, “In a New York Minute,” which is our favorite, but another watch face with disappearing flower petals and “Love me not” written underneath also made us smile.

Each watch face looks equally good in ambient mode, especially one where a pair of eyes — that are open when the screen is on — are closed when the screen goes dark. The 12 o’clock mark is always indicated with a spade too, again tying it into the brand. The leather straps are thin and come in several colors, plus there is a metal link strap available too. The metal band sees the watch lose some of the daintiness it has when paired with the thin leather strap. The good news is each strap has a quick release mechanism, meaning it can be speedily changed out for another to match an outfit.

The watch runs Android Wear 2.0, and the experience is similar to most Android Wear smartwatches. You have access to your notifications, the Google Assistant, and the ability to store music on the watch and stream it to Bluetooth earbuds.

Kate Spade gets technology and the way it fits into our lives.

Kate Spade does have a micro app to make the watch even more unique. Using a simple app on the watch, you select the color of your jewelry, bag, dress, and time of day, and a custom-look watch face is generated using complementary colors. The color picker is comprehensive, and unless your tastes are insanely eclectic, you’ll have no problem matching everything up. Crucially, the interface is simple — just a few icons and sliders — so it’s fast, which means you might actually end up using it. If it was ridiculously in-depth or over-designed, it would be ignored after the first try.

Kate Spade gets technology and the way it fits into our lives. It hasn’t just stumbled into designing and releasing the Scallop smartwatch, and it really shows. It’s the latest in a line of tech products, ranging from Apple Watch straps, hybrid watches, and even a handbag with a built-in battery charger, that the brand has put its name on. The Scallop feels like a natural progression. Despite personally not connecting with the brand — only because I’m a guy — it was obvious how the Scallop has retained the fun Kate Spade approach to products, simply by listening to how people reacted to it. I personally wouldn’t wear it, obviously; but I would like to see others flaunting it. Take that as a strong recommendation.

The Kate Spade Scallop Android Wear smartwatch can be pre-ordered now, for around $295 depending on the strap option.