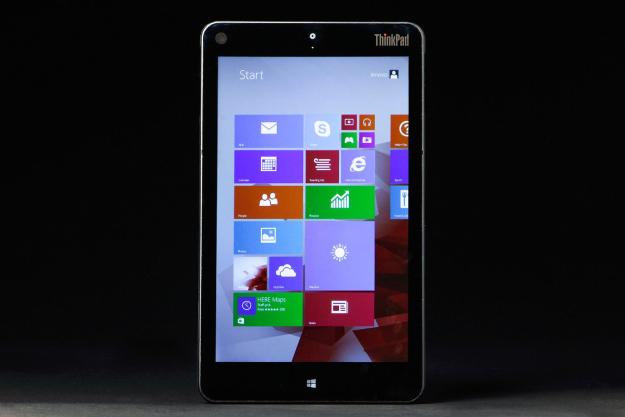 “Lenovo’s ThinkPad 8 is a fantastic tablet, but it’s let down by it’s operating system, Windows 8.1, which lags behind the competition.”

By the time Microsoft got Windows 8 up and fighting on 10-inch tablets that compete with the iPad, the battlefield had already shifted to a new breed of smaller, 8-inch tablets. With Windows 8.1, Microsoft’s operating system can finally operate on an iPad Mini-sized tablet, but we’re not sure you’ll want to use it.

Lenovo’s new ThinkPad 8 is a great piece of hardware, but using Windows on a tablet just isn’t a lot of fun, even if it is a very nice one with a fancy Intel Bay Trail processor and 1080p screen. But if you’re OK with Windows, it does sport the same $400 price tag as the iPad Mini Retina.

Editor’s note: Portions of this review detailing Windows 8.1 match our review of the Dell Venue 8 Pro tablet due to the similarity between the two 8-inch Windows 8.1 tablets.

Lenovo puts a lot of care into its ThinkPad line, and the ThinkPad 8 is no exception. Enclosed in the typical black shell, it’s only 8.8mm thick and weighs just under a pound. The edging is made of plastic, but the back of the tablet is metal with a subtle sparkly paint job. A red ring surrounds the rear camera, which is on the upper left side of the tablet when held in portrait, or vertically, and a ThinkPad logo with a light up red dot on the “i” sits across from it. The design has a premium look and feel to it, like most of Lenovo’s ThinkPad line.

Lenovo has included a stylus in its previous ThinkPad tablets, but it’s curiously missing from the Pad 8, though it would have really helped us use Windows on such a small screen. We’re guessing Lenovo eliminated it due to underuse and the difficulty of cramming an entire tablet into an 8-inch size.

Like most small tablets, Lenovo has designed the ThinkPad 8 to be used in a portrait orientation by default. We had no problems holding it this way, though we’ll get into some annoyances with Windows 8’s portrait mode soon. The power and volume buttons are on the upper right side of the tablet. They’re a little hard to feel out in the dark and the volume rocker on our review unit seems to squeak a little, but they both got the job done.

If you’re concerned about sound, you probably shouldn’t buy a tablet, but we found the two rear-facing speakers to work pretty well. Music is fairly tinny and doesn’t get too loud, but no more than usual for a tablet.

Overall, Lenovo has built a great 8-inch tablet that lives up to the ThinkPad name.

Windows tablets have a problem when it comes to screen resolution. Increasingly, Android and Apple tablets sport resolutions at or above 1080p, but if you drop one of those screens into a small Windows tablet, buttons and menus become too small on the traditional Windows desktop.

Windows still has a long, long way to go before its app selection looks anything like the competition.

With the 1920 x 1200 pixel 8.3-inch screen in the ThinkPad 8, many of the clickable desktop items (like things in the system tray) are frustratingly small. You can install Windows 8 applications, but they look fuzzy because the OS does a poor job trying to scale them up for you. None of them are touch friendly either. (Good luck trying to get your finger precisely on a tiny scroll bar.)

You can fix this tininess by upping the OS scaling in settings, but Windows doesn’t do this by default. And assuming you’re savvy enough to change the scaling setting, the end result, while it looks better, makes the traditional Windows environment feel cramped, as if you’re using a low-resolution screen. There’s no winning when you try to use the Windows desktop on a small tablet.

Lenovo does get credit, though, for delivering a high-quality IPS LCD screen in the Venue 8 Pro, with no viewing angle issues and plenty of brightness.

If you leave the desktop environment, Windows 8.1 works pretty well at a basic level as a tablet OS, giving you a now-familiar tiled interface for your frequent apps, while all other programs and apps are just a swipe (up from the bottom) away. Multitasking also works, with the ability to snap multiple apps to separate portions of the screen, or swipe in from the left to quickly cycle through open apps.

The real problem is that old Windows 8 refrain: the lack of apps in the Windows Store. Granted, app selection has gotten much better in the last year or so, and big-name apps keep arriving here and there. Many popular apps, like Flipboard, Facebook, Twitter, Mint, Netflix, and YouTube, are now available, but as we reported last November, app development for Windows 8 seems to be falling, rather than rising. And the current count of something above 125,000 available apps is a far cry from the more than a million apps available on both Android and iOS, with notable absences like Gmail, Instagram, and many touch-based games.

As we mentioned earlier, because the ThinkPad 8 runs the standard version of Windows, it can run also run most traditional Windows software. That’s definitely a plus for the tablet (and Windows slates in general). But having millions of non-touch-optimized programs available is not the same thing as having a modern app store full of appealing apps – particularly for a tablet. Windows still has a long, long way to go before its app selection looks anything like the competition.

We will say, though, that Web browsing works very well. The combination of Internet Explorer 11 and Intel’s Bay Trail processor make for as smooth a browsing experience as any we’ve had on any mobile device.

With a 2.4GHz quad-core Intel Atom (Bay Trail) processor, 2GB of RAM, and 32GB of storage (with MicroSD), the ThinkPad 8 sits at a comfortable average for Windows 8.1 tablets. It’s not particularly weak or slow, but there’s nothing to brag about if you compare it to a PC.

ThinkPad 8 performs well for a tablet. If you buy it for more than that, it will disappoint you.

Bottom line: The ThinkPad 8 should be able to run most traditional Windows programs, but it often won’t run more demanding programs, like Photoshop, particularly well. It’s best to limit your expectations on the Windows software front and stick to things like Office and other fairly lightweight programs. (Sadly, unlike the Surface 2, Microsoft doesn’t bundle Office with Windows 8.1.) If you’re going to run Windows programs at all, you should definitely opt for a model with at least 64GB of storage.

On the graphics front, the ThinkPad 8’s Intel HD graphics about matched the iPad Mini 2 in 3D Mark’s Ice Storm Unlimited Test, and was also on par with the Dell Venue 8 Pro, another Windows 8.1 tablet. It performs well for a tablet. If you buy it for more than that, it will disappoint you.

A great camera, for a tablet

We say this in every tablet review, but don’t buy a tablet for its camera. Lenovo has packed a solid 8-megapixel rear camera into the ThinkPad 8, but it’s still not great compared to any newer smartphone, and it’s no fun taking pictures with a tablet.

Many of our pictures look good, but it did have some trouble focusing on objects, especially if they moved at all (see dog pictures), and the shutter does have a second or so delay. Still, we were impressed with some of the outdoor and macro shots. Low light is, as always, a problem.

The ThinkPad’s 2.2-megapixel front camera should work well as a webcam and it can shoot 1080p video from the rear camera as well.

Lenovo claims that the ThinkPad 8 gets “up to 8 hours” of battery life, and our testing supports this, but know that it’s 8 hours on a good day. Expect 6 to 7 hours if you’re using the tablet heavily. This is great battery life for a tablet with an Intel processor, but less than a lot of Android tablets and the iPad, which often reach 10 or more hours of life on a charge.

Battery life shouldn’t deter you from the ThinkPad 8, but it’s not the tablet’s strong point.

We sound like a broken record, but this is a great device held back by Windows 8.1. Lenovo has built a fantastic tablet that lives up to its ThinkPad brand, but like the ThinkPad Tablet and ThinkPad Tablet 2, the operating system continues to let us down. The original ThinkPad Tablet ran Android before Android was ready for tablets, and the Tablet 2 ran Windows 8, which still annoys us on small screens (and large).

If you want a small tablet, you may be better off with a competitor like the LG G Pad 8.3 or Nexus 7; both are at least a hundred dollars cheaper than the ThinkPad 8. And there’s always the iPad Mini or iPad Air. Apple’s tablets are still the most flexible and usable around, though they will cost you at least as much as the $400 ThinkPad 8. But if you do want to use Windows on a compact, the ThinkPad 8 is a good option. And if you don’t care about the desktop at all, you could check out Nokia’s Lumia 2520. It gets great battery life.

Video-editing app LumaFusion to get a Galaxy Tab S8 launch
Spotify Wrapped 2022: what it is and how to view it
OnePlus’ new Android update policy matches Samsung, shames Google
The best smartphone stocking stuffers for the 2022 holidays
Best Black Friday iPad Deals: iPad Air, iPad Mini, iPad Pro
Save $70 on the Fitbit Versa 4 when you buy it today
My favorite phone of 2022 didn’t come out this year — it’s from 2021
Twitter’s downfall made me look for alternatives, but they just made it worse
Apple Music Sing brings karaoke singalongs to iPhones, Apple TV
How to buy over-the-counter hearing aids
Why the lawsuit against Apple’s AirTags may be bigger than you realize
Don’t miss this Apple Watch Ultra deal
Apple to use made-in-America chips for iPhones and Macs