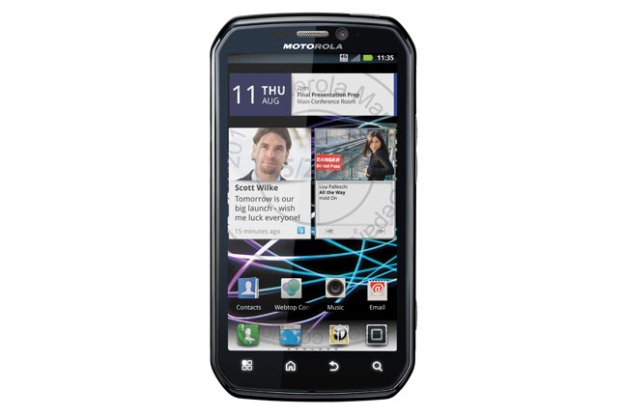 “If you're in the market for a new wireless carrier, the Photon 4G gives you a good reason to consider Sprint. Unlike the EVO 3D, Motorola's new phone doesn't rely on crafty gimmicks.”

AT&T and Verizon have had dual-core Motorola phones for months now, and someone at Sprint got jealous. The Motorola Photon 4G is one of the first dual-core Android phones on Sprint and, along with the HTC EVO 3D, one of the only top-tier devices on the carrier. The good news: It’s a pretty good phone. The bad news: It does suffer from a few of the same problems that seem to plague all Motorola phones this year, namely a bad screen and NinjaBlur.

In outward appearance and feel, the Photon 4G edges out any of Motorola’s other designs this year. It won’t win any awards for its thinness, but the Photon is solidly built, with a gorilla glass screen, dark (very dark) blue metal bumper, and that slick black rubberized coating Motorola puts on most of its high-end phones since the Droid.

The Photon feels very comfortable to hold, especially for a phone with a massive 4.3-inch screen. We particularly like the Battlestar Galactica-style curved cworners, which make it easier to slide your fingers from the power button on the top right to the volume toggle on the right side of the unit. Speaking of the buttons, they are metal and textured, which sounds trivial, but gives the phone a more premium feel and helps guide your finger to the section you want to press. The dedicated camera button is also pleasant, though sadly missing from the Droid 3 and Droid X2.

Ease of use and functionality also bleeds into the most noticeable feature of the Photon: its kickstand. Pulling out the metal band on the backside of the phone is easy and lets you prop it up (landscape) at about a 60 degree angle, good for use as a desk clock or for viewing video. Oddly though, because the USB charging port is facing downward while in this mode, you cannot use your phone as an alarm clock because you can’t charge it. This is because Motorola had to place the MicroHDMI and MicroUSB ports on the left side of the phone, so that the Photon would fit into Moto’s Laptop dock and Desktop dock accessories. Yep, you can use the infamous Atrix Webtop interface with the Photon. If you have the right kind of monitor and pay for the extra hookups, it’s a neat thing to try out, but don’t buy the Photon for its desktop qualities. The Webtop environment is too limited to really use effectively.

Finally, the cameras, rear speaker, and haptic navigation buttons are all pretty standard. They neither impress nor detract.

The Photon 4G is a 1GHz dual-core phone running on Nvidia’s Tegra 2 processor, which is quite a popular chip these days. As with most dual-core phones, the Photon also has 1GB of RAM. Internal storage is a bit more impressive. The phone has 16GB of built-in storage, more than most high-end phones. With the MicroSD slot also available, the Photon is definitely a media lover’s device.

Unfortunately, it’s not a good device for those who value colorful, high quality screens. Though the capacitive touch works well and the phone has an impressive qHD resolution of 940 x 560 pixels, the Photon suffers the same display problems as the Motorola Droid X2, Droid 3, and Atrix. In an effort to save money (we imagine), Motorola has chosen to combine a PenTile display with LCD technology, resulting in a bland display that noticeably muted yellows and other colors. We’ve had issues with color banding as well, but the worst problem with the screen is the white and black subpixels, which create a tiny, but visible checkered grid of black and white dots. These dots ruin the smoothness of nearly any icon or moving graphic and are especially noticeable on the phone’s home screen. Motorola has attempted to combat the problem by filling its NinjaBlur interface with dull grays and blues, but the lack of color seems to only emphasize the display’s weaknesses. This screen isn’t colorful. We recommend you check it out at a store before you buy, just to make sure this issue doesn’t bother you. Other than the dull colors, the screen appears to operate just fine.

The upgrade to Android 2.3 has been kind to Motorola phones. When we tested the Droid X2, which initially ran Android 2.2, Motorola’s user interface was slow and laggy, but over the summer, the electronics maker finally moved up to Android 2.3 (Gingerbread). We’re quite pleased with the boost in speed and responsiveness, but NinjaBlur remains one of the lamer modifications of Google’s Android operating system, and possibly the worst among the major players: LG, HTC, Samsung, Motorola, Sony Ericsson. NinjaBlur’s widgets, however, are a bit nicer. We like how resizable Moto’s widgets are, which include a custom clock, calendar, sticky note, social widget, and many others, including an especially useful 4G toggle switch.

Hopefully, with Google buying Motorola, NinjaBlur’s days may be numbered. If Motorola can’t keep up with the custom interface innovations by companies like Samsung and HTC, then it would be better loading its phones with the stock version of Android. At least then we wouldn’t have to wait nine months for phones to run the latest version of Android.

In summary, Motorola’s widgets are nice, but we aren’t big fans of the colorless, inconsistent NinjaBlur interface, in general. With that said, like the screen, this may not be a make or break feature for some. Please try before you buy.

There are somewhere in the neighborhood of 300,000 apps on the Android Market now, and the Photon can probably run almost every one of them.

As far as preloaded apps, Motorola has included a few useful apps, like a task manager, task list, and file manager, but we aren’t onboard with all of the changes. The Photon does not carry Google’s Music app, which wouldn’t matter except that Motorola’s version cannot connect to Google’s cloud music service, which is currently free. And while we like the addition of podcasts and FM radio, the app doesn’t connect up with Google Reader or any other podcast directories, making discovery difficult. Those who buy the Photon may want to download Google Listen and Google Music from the Android Market, or another service of your choice.

Finally, though Sprint doesn’t seem to fill its devices with as much bloatware as Verizon, there are quite a few non-removable Sprint apps installed on the Photon 4G. Nothing horrifying, but we don’t understand why they aren’t removable.

The Web works as well as one might expect. Motorola has stuck with the standard Google Android browser, which has its share of downsides, but gets the job done better than most of the custom smartphone browsers we’ve seen. We look forward to the day when Google Chrome comes to Android, but until then, this Webkit browser will do the job. Warning, it tends to render mobile pages quite frequently, which can be annoying at times. At 4.3 inches, the screen is almost too big to need to run mobile sites.

Our experience with app installation and boot times has been positive and is helped by Sprint’s 4G WiMax network, which outpaces AT&T and T-Mobile’s HSPA+ networks by a good deal, at least on download speed. In Manhattan we’ve been seeing about 3Mbps download speeds. Unfortunately, uploads are a bit slow at 0.5 to 1 Mbps.

Nobody will buy the Photon 4G for its camera, but Motorola has improved the performance of the camera app significantly from what we saw in the Droid X2 — which, again, ran on Android 2.2. Colors are still a bit faded, but not as badly as before and the dedicated camera button makes the whole operation much smoother than a touch-to-shoot button would.

The Photon has an 8-megapixel rear camera with a dual-LED flash, which is pretty standard. We’re a bit disappointed that it can’t capture 1080p video, but we’ve yet to really have a need to capture 1080p video, so 720p works well enough for now. Those of you who are into video calling and conferencing will likely notice that the front-facing camera is only VGA (0.3 megapixels), but it gets the job done well enough, unlike the Droid X2, which has no front-facing camera at all.

The Photon 4G has given us no problems with reception. Roaming around New York City on the Sprint network, the phone held its own. Call quality seems a bit clearer on the device compared to other high-end phones, but not dramatically so. After all, you can’t really make a phone call sound good. At least not yet.

We’ve yet to run a full battery life test on the Photon, but from our experience, the battery life is pretty typical. From a technical perspective, the battery does hold a bit more than previous Motorola phones, at 1,700 mAh. While the Droid 3 and Droid X2 were rated to last 9 hours while in a call, the Photon will get 10. It’s not a ton more, but we’ll take whatever we can get.

If you’re in the market for a new wireless carrier, the Photon 4G gives you a good reason to consider Sprint. Unlike the EVO 3D, Motorola’s new phone doesn’t rely on crafty gimmicks. It’s just a good overall phone. Unfortunately, while we like the design and craftsmanship, the Photon does suffer from the same screen issues that have plagued recent Motorola devices, and the camera is nothing to write home about. If these features are important to you, perhaps consider looking elsewhere