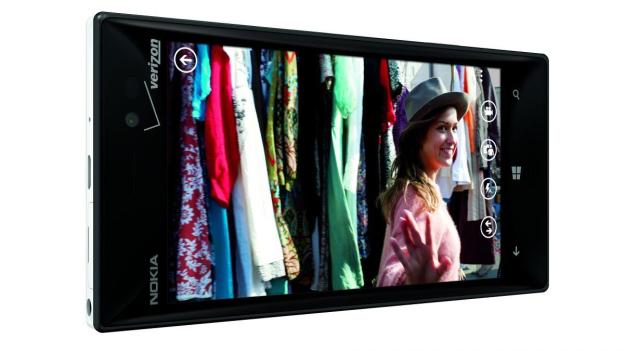 After a veritable barrage of teaser images and videos, focussing on the Nokia Lumia 928’s camera technology, the latest Finnish flagship is officially coming to a Verizon Wireless near you.

The Lumia 920 is Nokia’s Verizon-branded variant of last year’s 920 and finally brings PureView camera technology to Verizon customers. Optical Image Stabilization is sticking around as well, which did a good job of steadying video in the Lumia 920. The lens is Carl Zeiss and Nokia packed in a xenon flash for “photo buffs.” This is no surprise given Nokia’s fixation with camera features and marketing targeted almost exclusively at the Lumia’s low light capabilities.

The body, however, has seem some aesthetic changes. The edges are now more squared off, though the screen still slopes downwards into each edge. As well, the speaker has been moved from the bottom of the device to a speaker grill on the back. Nokia says this is “one of the most advanced loudspeakers available” so it will be interesting to see how it stands up to a first listen. The design change seems odd here as it seems Nokia is moving toward a typical rectangular box, when it had a signature style with the flattened top and bottom contrasting with rounded sides. Color options have also been slashed. The Lumia 928 is currently only available in black or white.

On the specs side of things, the 928 seems to pack the same punch as the 920. There’s a 4.5-inch display with 1280×768 pixel resolution, 1.5GHz dual-core Qualcomm processor, 1GB of RAM, and 32GB of internal storage. The ClearBlack display is carried over as is Corning Gorilla Glass, but the 928 uses the second version of it. The 928 also makes use of a super-sensitive touchscreen, just like the 920, that lets you operate the device while wearing gloves.

Availability will begin on May 16, both online and in-store, for $100 on a two-year contract after sending in a $50 mail-in rebate. To sweeten the deal, customers will receive a $25 credit for use in the Windows Phone Store. If rumors are to be believed, Instagram may be on the way courtesy of a deal with Nokia.

All in all, not much has changed on paper with the Lumia 928, but it has seen a pretty major facelift. The appeal here is that Verizon customers who have been looking longingly at the Lumia 920 on other carriers can now put a top-tier Nokia device in their own pocket.