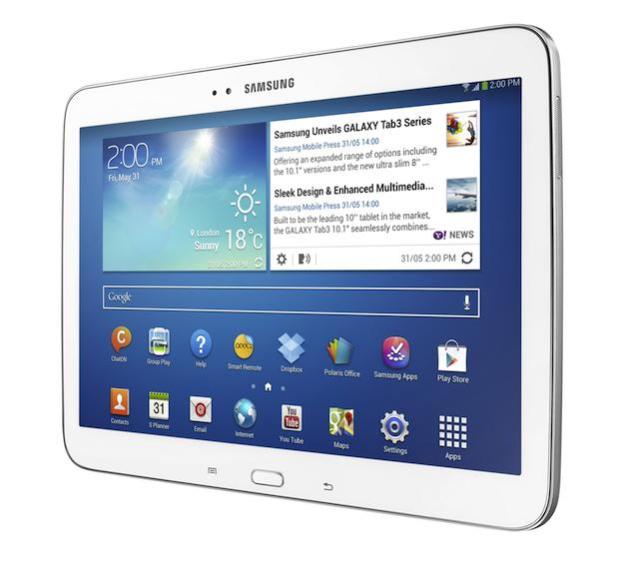 Check out our review of the Samsung Galaxy Tab 3 (8-inch) tablet.

Samsung obviously doesn’t want to crowd the hardware it’s going to unveil at its June 20 event in London, as it has announced both the Galaxy Tab 3 8.0 and Galaxy Tab 3 10.1 tablets today. Together, they join the Galaxy Tab 3 7.0, which was revealed all on its own last month, to complete Samsung’s budget-focused tablet range for 2013.

The Galaxy Tab 3 8.0 may sound familiar, but it’s not a direct refresh of a tablet from the Galaxy Tab 2 range, as the 8-inch screen size is new to the line-up. Instead, it’s a cheaper alternative to the Galaxy Note 8.0, and as with the 7-inch Tab 3, the design is highly reminiscent of it. The 8-inch display has the same 1280 x 800 pixel resolution as the Note 8.0, and is powered by an unnamed 1.5GHz, dual-core processor.

On the rear of the 7.4mm thick tablet is a 5-megapixel camera which can also record 720p video, while a 1.3-megapixel camera above the screen takes care of the video call duties. The processor is supported by 1.5GB of RAM, while there is the option of either 16GB or 32GB internal memory, plus the chance to pop in a microSD card to add up to a further 64GB. Samsung will also be offering a Wi-Fi version, plus one with 3G HSPA+ and 4G LTE connectivity.

The Galaxy Tab 3 10.1 is ever-so slightly different to the 8-inch model. Obviously, the screen is larger at 10.1-inches, but the resolution stays the same (which has the unfortunate side-effect of dropping the pixel density down to 149ppi from 189ppi), while the processor is listed as a 1.6GHz dual-core chip, this time with only 1GB of RAM. Samsung has also given the 10.1-inch tablet a 3-megapixel rear camera to accompany the 1.3-megapixel video call lens, and the battery has been enlarged to a 6800mAh cell. Otherwise the specification is the same, as is the choice of internal storage memory and 3G/4G connectivity.

Several weeks ago, it was rumored Samsung would introduce Intel processors to its Galaxy Tab 3 range with the 10.1-inch model; however, if it has, it hasn’t made any noise about it in the press release. Reuters’ report does state both the 8-inch and 10-inch models come with Intel chips though, so we’ve contacted Samsung to clarify and will update here if we hear back.

If Intel chips are inside the two new tablets, it will at least make them slightly more interesting, as otherwise they’re both very safe and rather dull devices. Samsung wants to put them on sale around the world in June, but it hasn’t confirmed where it’ll do so, or how much either will cost.

Updated on 06/04/2013 at 09:15am by Andy: The question about which processor is inside the new Galaxy Tab 3 10.1 tablet has been answered, as Intel has tweeted confirmation it’s powered by an Atom processor. Since then, a press release has turned up on Intel’s site, providing more details. An Atom Z2560 Clover Trail+ combined with either an Intel XMM 6262 3G radio, or an XMM 7160 4G LTE radio, powers the Tab 3 10.1; however the Tab 3 8.0 isn’t mentioned, so we’re still unsure what’s powering the 8-inch version.