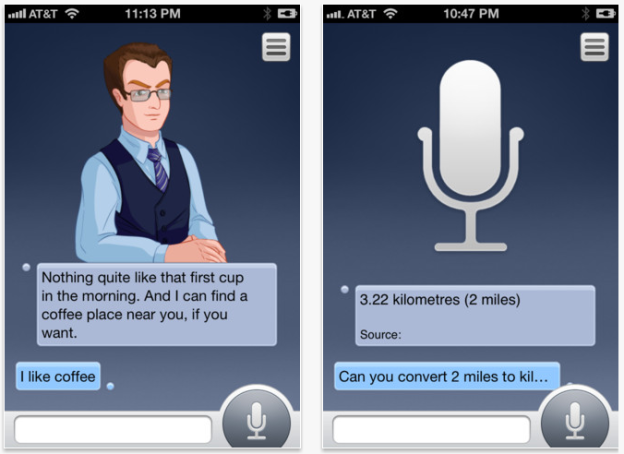 Way back in the fall of 2011, when we were just being introduced to Siri in all her (short lived) iPhone 4S exclusivity glory, we wrote about Speaktoit. It was among the first legitimate answers to Siri that came hot on the heels of the iPhone 4S announcement.

But back then, it was only an Android alternative to Siri – many of which have been added to the Android Marketplace since. Now, Speaktoit is available in the iOS App Store and offers older iterations of the iPhone access to Siri-like service.

Much ado was made about the fact that anything pre-iPhone 4S wasn’t able to use Siri. While these conditions were relaxed in December, iPhone 3GS and earlier iterations were still out of luck. But now Speaktoit can bring the personal assistance feature to older iOS models; so how do the two stack up against each other?

We tried to put Speaktoit running on an iPhone 3GS against Siri on the 4S, but unfortunately Siri was experiencing some down time and we were unable to compare voice commands. But our general experience with Speaktoit was varied: the app had some trouble with directions, telling us it couldn’t find the Portland International Airport or the nearby city of Beaverton. When it came to tasks like finding restaurants, making phone calls, or locating a dry cleaners, Speaktoit worked quickly and easily.

Speaktoit doesn’t seem to have as sophisticated language recognition as Siri. For instance when we asked for directions to “Hillsboro” and “Oregon City,” it said it couldn’t find “Hillsborough” or “Origin City.” You need to focus on enunciation more, and it makes us dubious about how users with accents would fare. It is quite conversational, however, and you aren’t forced to speak like a robot just to get your requests across.

The noticeable feature Speaktoit is lacking is affiliate partners. Siri’s integration with apps like OpenTable, Fandango, and Yelp definitely give it an edge. Speaktoit tells is it’s continuing to add more services, and Evernote is one notable integration it now features. The native voice control app also is a more hands-free experience: Speaktoit will compose a text message, for instance, but you still have to manually hit “send.”

But it covers the basics (with varied results, ranging from mediocre to great): composing and sending texts and emails, making calls, finding nearby places, scheduling, weather questions, and translation. And while it might not best Apple on seamlessly working with native apps or outside app API integration, it does connect to Facebook and Twitter, something that’s noticeably missing from Siri.

Speaktoit is currently $1.99 in the App Store, but it will be free for the first 100,000 people who download it on Valentine’s Day, and then will cost $0.99 for the rest of the day. Check out our quick hands-on video with the app below.