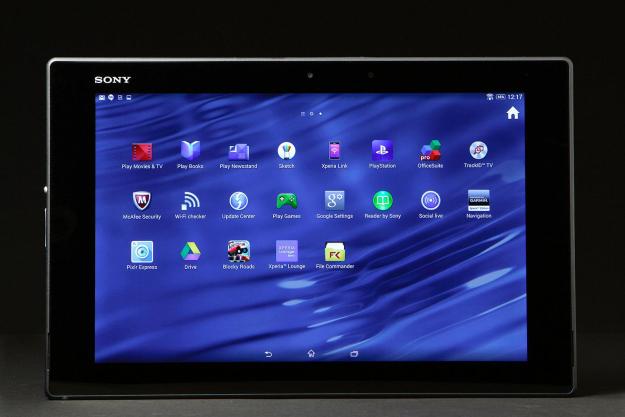 “The Xperia Z2 Tablet is the best 10.1-inch Android tablet available, and is so thin and light people literally say “wow” when they hold it.”

Sony has yet to strike gold with a tablet. Its first Android slate was pie-shaped, and its second was recalled. Last year, Sony finally got itself on track with the Xperia Tablet Z (read our glowing review), but the device hasn’t flown off shelves. Stellar sales or not, Sony is doubling down on quality this year. The Xperia Z2 tablet has everything going for it that Sony’s last tablet has, and fixes some of its shortcomings. It may be the new Android tablet to beat.

Update at 7-09-2014 by Jeffrey Van Camp: The Xperia Z2 Tablet is now available to order on Verizon Wireless in the United States. It’s also available for pre-order on Sony’s online store for $500.

Last year, we were amazed that everyone who held the Sony Xperia Tablet Z would say “wow,” and point out the thinness and lightness of the device. It’s been a year, but Sony has done it again. Everyone that held our Z2 Tablet said “wow.” There’s a good reason, too. At 15.5oz, it’s nearly 2oz lighter than its predecessor, and it’s 0.5mm thinner, at just 6.4mm thick.

The Xperia Z2 Tablet is thinner and lighter than the iPad Air. That’s no easy feat, especially with its added IP58 water resistance. A Z2 Tablet can sit in a meter of water for up to 30 minutes without dying. You won’t find a waterproof iPad Air at the store.

Of course, the iPad does have strengths that Sony’s tablet lacks. Its rear speaker is a little better than Sony’s dual front-facing speakers, which still sound blown out (like most tablet speakers) at high volumes, though they are an improvement from the Tablet Z.

Additionally, because it’s so thin, the Z2 will flex a little, which is scary. Bend it a little, and you’ll notice pressure waves on the LCD screen. (Press your finger on your laptop screen; that’s the kind of marks we’re talking about.) The Z2 may be durable, but it’s almost too thin for its own good.

The new Xperia Z2 Tablet is thinner and lighter than the iPad Air. That’s no easy feat.

Jumping back to the positives, the Z2 tablet has a nice rubberized coating around it, which helps you keep a good grip and doesn’t attract fingerprints. It also charges up with a standard Micro USB cable and has a MicroSD card slot so you can expand the 16 or 32GB of embedded file storage.

Finally, the power and volume buttons are both located on the left side of the screen, in the tablet’s naturally-held horizontal (landscape) orientation (as oppose to being on the top, in portrait orientation, like other tablets). The positioning works well; it’s easier to get to the buttons you need on the Z2 than with many larger tablets.

Overall, the Xperia Z2 Tablet still has that “wow” factor and is a comfortable device to hold. The bezel, or unused space around the 10.1-inch screen, is thicker than the iPad Air and newer tablets, but not annoyingly so.

Sony has learned that the best way to create a great Android tablet is to stay out of Google’s way. Google’s operating system is fast and solid on its own. With the Z2 Tablet, Sony hasn’t messed with that magic too much. It has the newest version of Android (4.4 KitKat) installed, which is fantastic. There are a few interfaces with a Sony vibe to them, like the pull-down notification and quick-settings menus, but that mostly means they’re just a little more black and white than Google’s usual Tron-like blue coloring.

We like the small tray of mini apps you can access on the Recent Apps menu, if only because we got some use out of the floating calculator to do some math while we were Web browsing. In addition, if you swipe to the left on the apps list screen, a menu pops up that will let you easily install, uninstall, re-order, or search through your apps. Sony even has its own “Sony Select” app store, which recommends apps, but then skillfully links back to the Google Play Store.

There are 55 apps pre-installed on the Xperia Z2, and a few of them are removable, which is nice. Most of these are the Google apps you want and some Sony apps like Walkman, Video Unlimited, and PlayStation. Sony’s apps get updated through a special Update app, which will confuse some users, and annoy others due to its ugliness. Why couldn’t Sony apps update through Google Play?

On the whole, the Xperia Z2 Tablet is extremely speedy and slick. We have no deal-breaking issues with the interface. There is still a lack of fantastic tablet apps for Android when compared to the iPad, but things are improving. See our list of Best Android Tablet Apps to get an idea of what’s available.

Cutting-edge specs, especially for a tablet

The Z2 Tablet can handle just about anything you can throw at it.

It also has a 10.1-inch, 1920 x 1200-pixel IPS LCD screen. Most good tablets have IPS screens; they’re nice because they can be viewed at extreme angles. (Note: we turned off the X-Reality image enhancer feature in Settings > Display. It made movies and images too crisp and bold looking, so much that they looked unnatural.)

The difference over last year’s Tablet Z is clear. This device does not have the lag that Sony’s last tablet had. It can handle just about anything you throw at it, and is a great device for high-end 3D games, too.

It does have a camera, but…

The 8.1-megapixel camera on the Z2 Tablet is not great. Sony has included a ton of fun 3D effects that do things like put moving dinosaurs on the screen, and there are some Instagram-like filters and special features built in, but the rear camera of the Z2 Tablet doesn’t take great shots. Outdoor shots lacked detail, especially close-ups. In low light, shots from the Z2 Tablet had an almost inexcusable amount of noise.

Like all of the big players this year, Sony has added a “Background defocus” mode, which lets you take pictures, then refocus them like a Lytro. It does this by taking two shots, one after another at different depths of field. We didn’t try too hard, but we could not get this feature to work right. Even if it does, you will have to sit pretty still, because it takes a good couple seconds for the camera to take the two consecutive photos.

Video recording has similar problems. The processor on the Z2 Tablet can handle up to 4K video recording, but the camera cannot.

Having said all that, in a pinch, the Z2 Tablet will take a photo. We’re not sure a cutting-edge camera is needed on a tablet. We have yet to find one that astounds us with its image quality.

There’s nothing stellar or bragworthy about the Xperia Z2 Tablet’s battery life, but it holds its own. We’ve gotten about 9-10 hours in our testing so far. Sony has included a 6,000mAh battery, or one about twice as large as a typical phablet phone, and there are a couple battery-saving modes if you run out of juice. Low-Battery mode can kick in when you get down to 20-30 percent battery life and a Stamina mode will shut off background apps when the screen is off, extending life considerably.

The Xperia Z2 Tablet is not perfect, but it’s a winner. Its $500 price tag is steep for an Android tablet, but this time around Sony is a step above most devices out there. When your biggest rival is the iPad, you’re on the right track. The Z2 matches or bests every tablet out there.

Topics
Video-editing app LumaFusion to get a Galaxy Tab S8 launch
The best Samsung Galaxy S23 cases: our favorite ones right now
The best Samsung Galaxy S23 Plus cases: 8 ones you can’t ignore
Best Phone Deals: Save on Google Pixel 7, Galaxy S22 Ultra
The Galaxy S23 Ultra has a huge perk for Adobe Lightroom fans
Here’s another big reason why T-Mobile 5G dominates AT&T and Verizon
Apple’s Black Unity watch band looks great and supports a good cause
The Nothing Phone 2 is real, and it’s coming to the U.S. this year
A foldable iPad in 2024? This Apple insider is ‘positive’ it’s happening
How to sync your Outlook calendar with an iPhone
Secure Your Value: Lock in the price of your Verizon phone plan for 3 years
AirTag helps flyer find his AirTag – but not his missing wallet
Best Apple Deals: Save on AirPods, iPads, MacBooks and more