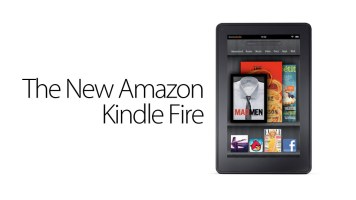 It looks like Apple’s iPad finally has some serious competition on its hands. According to the results of a recent survey by consumer electronics shopping and review site Retrevo, shoppers in the US interested in buying an iPad this holiday season are outnumbered by more than three times by those interested in Amazon’s Kindle Fire – and it’s not even on the shelves yet.

Encouraged by the number of pre-orders it has received since the Kindle Fire was unveiled in September, the e-commerce giant has reportedly ramped up production to meet demand. The Fire will start shipping next week.

Retrovo’s study, which involved more than 1,000 consumers, showed that tablets could be the hot item this holiday season, with 69 percent of respondents saying they’re looking to buy one, or want to at least find out more about them.

Retrovo said that “the iPad 2 is starting to show its age and the new Kindle Fire is about to make the scene with a very attractive $199 price point.”

It also commented on Amazon’s timing regarding the release of the Fire. “With the iPad 2 nearly a year old and the iPad 3 rumored to not be available until next year (missing the holiday season), Amazon may have timed the launch of their tablet just right.”

The unveiling of Barnes & Noble’s Nook Tablet on Monday, however, undermines the survey’s results somewhat. The research was carried out before the Nook Tablet was announced, and with a spec sheet similar to that of the Fire, it’ll no doubt be of interest to consumers too. Barnes & Noble’s new tablet, which hits the shelves later next week, also sports a 7-inch screen and runs a version of the Android operating system, although it has double the internal memory and costs $50 more than the Fire.

Of course, with Apple having sold somewhere in the region of 35 million iPads since its launch in 2010, Amazon has some catching up to do, but if the results of Retrovo’s survey prove accurate, this holiday season may see a noticeable shift in the tablet market for the first time.