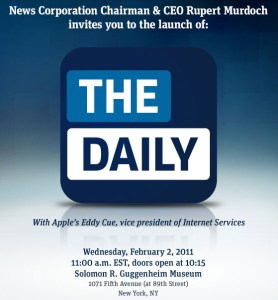 This morning, as expected, News Corp CEO Rupert Murdoch will be on hand at New York’s Guggenheim Museum to announce the launch of the company’s new daily newspaper for the iPad, called The Daily. The event starts at 11 a.m. EST, so there’s nothing to be found just yet either on Apple’s App Store or the news outlet’s web portal.

News Corp has kept the actual product tightly under wraps during development and interest is running high as a result. This first iPad-exclusive news source offers consumers six sections worth of daily coverage, complete with the interactive bells & whistles — audio and video elements — that users have come to expect from other, similar offerings. Murdoch invited a select group into his NYC home last night to sample the new service in advance of its release today, according to All Things Digital, which it should also be noted is itself a News Corp site.

The Daily will be free starting at launch for two weeks, after which customers will have to pay 99 cents per week for continued access. The news outlet’s Web-based portal offers free access, though only a small percentage of content will be offered there. It’s a bold step for the company. The interactive features of The Daily are appealing — nothing you won’t see in monthly offerings from Wired and Popular Mechanics — but more interesting is the underlying idea of a paid digital newspaper. Web surfers who have been trained to expect free news from their favorite dot-coms are now being asked to pay for similar content in a shiny, new package. The cost is admittedly minimal, and considerably lower, for example, than the $6 or so per week paid for a New York Times physical newspaper subscription.

We want to hear what you think. Is The Daily appealing to you? Are you okay with paying a small premium in exchange for daily news content, packaged and polished? Let us know in the comments!