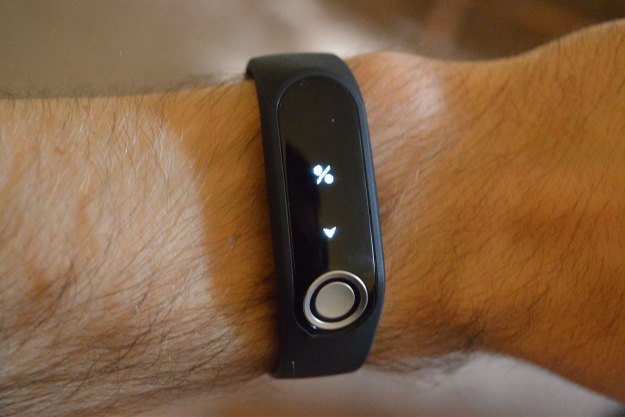 “The TomTom Touch is a decent fitness tracker, but it’s held back by a few issues.”

At first glance. the TomTom Touch is different from most fitness trackers. Not only does it come at a great price of $130, but it boasts a heart rate sensor, the ability to read your body fat, and more. But is that enough to make the Touch stand out amongst the army of fitness trackers available to purchase? We put the device to the test.

The band of the device is made of a rubber that lets you adjust to different wrist sizes – which is necessary since the heart rate sensor requires the device be relatively well secured to your wrist. The strap and the main tracker detach, which is also necessary for charging, as the microUSB port is hidden by the strap when the two are matched together. The rubber band causes it to get pretty damp with sweat under there during a workout, but that’s an issue with the nature of the material rather than the device itself.

The Touch features a monochrome OLED touch display, which is a noted benefit over the more powerful but non-touch TomTom Spark 3. Touching the screen isn’t the only way you’ll interact with the device though – there’s also a circular button underneath the screen that’s used for things like waking the display and confirming certain functions. The screen can also be used to show basic notifications, like calls and texts, although you won’t be able to use it to do things like read emails, or even read the texts that you receive.

Despite straightforward instructions for pairing the device, the process was far from simple. The first thing you’ll need to do is download the TomTom app for your computer, whether it be the Mac or PC version. Then, once you plug the device into your computer and download any necessary updates, you’ll go through the steps of registering the device. Next, you’ll need to download and open the TomTom app on your smartphone, scroll through the options on your Touch, select the pairing option, and hit the “add new device button” in the app.

As one of the few devices to be able to track body fat, step counting and heart rate, the Touch does somewhat redeem itself.

Long process aside, frustrations came when it took quite a few attempts to actually pair; and even when it did pair, it did so irregularly. Sometimes, for example, it would sync automatically at random points during the day – which is a good thing. Other times, however, it wouldn’t sync for hours, and require us to restart Bluetooth multiple times before the syncing process could begin.

It’s worth noting that we did find it easier to pair depending on the phone, so if you’ve got a newer smartphone you might find it a little easier. Most of the issues we had were when pairing with a Nexus 6, and when we switched over to the Pixel XL things were a little more consistent. Not perfect, but better.

The connectivity issue was far and away the worst thing about the Touch.

The MySports app is adequate – when it works. As mentioned, it certainly runs into its fair share of syncing issues, but once it does sync, most people will be able to see enough information for their needs. Unfortunately, the way that the app is designed makes access that data a little difficult, so it may take some time to get used to the layout.

Another issue we experienced is that you can only connect one TomTom tracker at a time. That was a problem for us – especially as we were testing both the Touch and the Spark 3 around the same time. You can still sync data with your account, but you’ll have to do it manually through your computer. That’s a problem that TomTom should be fix – there are plenty of other fitness tracking apps that allow for multiple devices to connect.

Of course, the real point of the Touch is fitness tracking and we generally found it to be pretty accurate except for a few glaring anomalies. For example, the step counter was very generous in how it tracked steps – after sitting in my car and driving for an hour, we noticed that we had gained an extra few hundred steps. That’s no small amount when the daily goal is 10,000.

The connectivity issue was far and away the worst thing about the Touch.

Still, issues like that didn’t happen most of the time – just on occasion. In general, we found that the tracker was quite accurate in tracking a range of different metrics, including sleep, calories burned, and so on. That said, if you’re looking for an in-depth sleep tracker, the Touch is probably not the best device for you. The Touch’s sleep tracking is quite basic – you can’t delve into details like light and deep sleep, but only how many hours of sleep you got for the night. Consider the sleep data a bonus feature on top of a daily activity tracker.

Most other metrics, however, on the Touch can be a little more in-depth. You can set goals on the device for things like steps, weight, among others, and within the app you can set how long you have to achieve those goals. Unfortunately, actually following those goals is largely up to you – neither the device nor the app hassles you to get those goals accomplished, it just tracks whether you do or not. It would have been nice for the device to push the user a little more with optional notifications and reminders.

One cool feature that the Touch has over some other fitness trackers is that it can track body fat. All you have to do is swipe to the body fat screen on the tracker, then place your finger on the sensor, at which point it will track your pulse. Pulse is also tracked in the heart rate sensor on the device, and through the electrical signals sent out, the device can track your body fat. It’s a pretty cool feature and one that only takes a few seconds, however there are some questions about its accuracy. For example, through a BMI calculator, we were able to input our weight and height, and come up with a figure of 20.3 percent body fat. The Touch, however, turned up 16 percent, and while we would love to stick with TomTom’s figure, in reality the 20 percent is much more accurate. Nevertheless, the device can serve as a consistent gauge, so at least you can tell whether your body fat is increasing or decreasing.

One of the big features of the TomTom Touch is sports tracking, which takes things a step further than the standard activity tracking. Once you set the device to sports tracking mode, it will start tracking your heart rate, as well as time and distance. It’s worth mentioning that runners may want to look elsewhere for a true, GPS-based distance tracker because the Touch calculates distance through your arm’s movement.

Once you’ve completed a workout, you’ll be able to see the results in the app, which will show things like your heart rate zones, calories burned, duration, and so on. It’s a nice snapshot into what you achieved during your workout, but it’s probably not the best for those looking for a real in-depth look.

While TomTom says the device should last five days on a single charge, we achieved closer to three days. Thankfully, it’s easy to charge the device through the microUSB slot, however that slot is a double-edged sword, as it limits waterproofing. That said, the TomTom Touch has an IPX7 rating, meaning that it will be able to withstand some water, such as in the shower, but it’s not going to be able to handle swimming.

The TomTom Touch is a decent fitness tracker, but it’s held back by a few issues. The app has a layout that takes getting used to and suffers from serious syncing issues, while the tracker’s rubber wristband itself can get uncomfortable. Still, as one of the few devices to be able to track body fat, step counting and heart rate, the Touch does somewhat redeem itself.

The Touch is a great tracker for the price, but there is better – the Fitbit Charge 2 offers a much better app and syncing process, and while it doesn’t track body fat, it is better about helping you achieve your goals.

Unlike some other fitness trackers in this price range, the Touch is not waterproof, so it’s unlikely to be as durable as the ones that are. Apart from that, the device is relatively tough.

If you’re looking specifically for a device that can track your body fat, this is a great, low-cost option for you. If not, there are better options out there, like the Fitbit Charge 2.