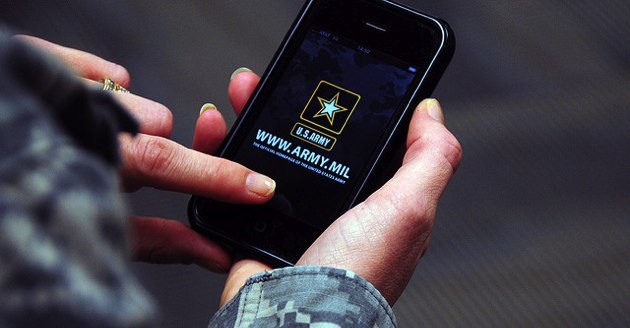 Apple often likes to call their products things like “magical” and “revolutionary.” But “deadly” could soon be added to the list. According to the Wall Street Journal, the United States Army will soon begin field testing Apple’s iPhone and iPad, as well smartphones and tablets based on Google’s Android operating system to see whether they can withstand the pressures of combat.

Armed with a variety of battle-centric apps, the same devices we use to find a restaurant or play Angry Birds could be used for everything from expediting medical treatment for wounded soldiers to helping track down the enemy.

One app, for starters, would allow an injured soldier to relay his exact location on the battlefield, name, type of injury and other crucial information to medical personnel. The Army plans to begin speed testing such an app to see whether it actually reduces the time needed to treat a downed man, or merely clogs the system.

An app called “SoldierEyes” (not available in the App Store, just FYI), a navigation tool, allows soldiers to use the phone’s camera to survey his or her surroundings with “augmented reality” to calculate the direction and distance to their objectives. And other apps give soldiers mobile biometrics tools for identifying particular enemies.

While smartphones have become a must-have device for many civilians, the Army is taking a conservative approach towards their adoption for combat purposes.

“We want to give people the right phones for the right reasons, not just give them another shiny thing to hang on their equipment carriers,” Michael McCarthy, one of the Army heads in charge of the smartphone project. He added that, in order for the Army to add iPhones and Android handsets to their list of battle tools, they must be both inexpensive and tough enough to withstand the pressures of combat. The Army won’t “spend $2,500 to ruggedize a $200 phone,” he said.

In total, the Army has about 85 different apps they are testing for battle, some created by the military, others made by commercial designers. The testing of these apps and other smartphone technologies, which has been taking place since at least 2010, has so far cost about $4.2 million.

Video-editing app LumaFusion to get a Galaxy Tab S8 launch
I thought iOS 16 would ruin my iPhone 8, but it shocked me
The best iPhone games to play in December 2022: Marvel Snap and more
Best Cyber Monday Smartwatch Deals: Apple Watch, Fitbit, Galaxy Watch
Best Cyber Monday Tablet Deals: iPad, Amazon Fire, Samsung Galaxy Tab
We asked the experts if biological sex affects heart rate sensor accuracy
I still love my iPhone 14 Pro, but not for the reason I expected
The best iPhone apps to download in December 2022
Instafest app: How to make your own Spotify festival lineup
How old phones became the cool, good phones in 2022
The best Android apps for December 2022
The Galaxy Z Flip 5 might fix the Flip 4’s biggest design flaws
Don’t listen to billionaires like Elon Musk — app stores are fantastic