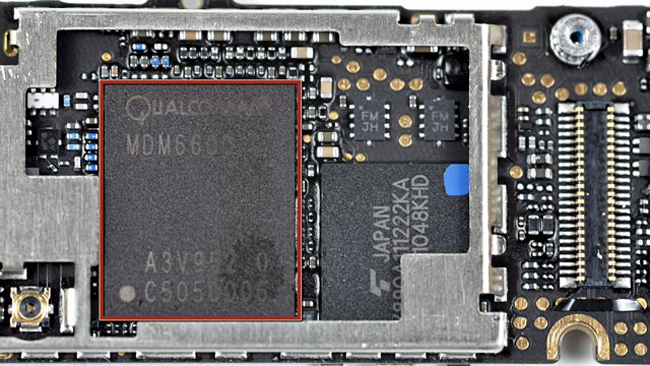 Teardowns of the soon-to-be-released Verizon iPhone 4 shows promising signs that  a “world phone” iPhone could soon be on the way. The giveaway is Apple’s use of a Qualcomm chip that is both GSM- and CMDA-compatible.

Inside, it’s been discovered that the Verizon iPhone is, surprisingly, powered by a Qualcomm MDM6600 chip. The reason this is significant is, this particular chip is dualmode GSM and CDMA compatible. This means that, potentially, an iPhone 5 loaded with this chip could work on any network, worldwide — including AT&T.

Teardowns by iFixit, iFixYouri/9to5Mac, and UBM TechInsights have all confirmed the existence “world mode” chip.

The MDM6600 chip — which has never before been used by Apple — is the same chip used in the Droid Pro world phone, which is capable of connecting to both GSM and CDMA networks.

As Seth Weintraub at 9to5Mac notes, however, the lack of a SIM card slot on the Verizon iPhone means it “won’t be doing GSM duties.” It does, however, basically guarantee “that the iPhone 5 will be dual-mode, perhaps one phone that can be used on both Verizon and AT&T (and obviously every other carrier outside the US),” writes Weintraub.

Other notable changes revealed in the iFixit teardown include:

•  Antenna: The Verizon iPhone “has four antenna segments (two “U” shaped pieces at the top and bottom, and two straight bars along the edge),” instead of the “three differently shaped antennas” on the AT&T iPhone 4. Of course, iFixit notes, “[o]nly time will tell if this new antenna design helps combat the reception problems plaguing the GSM iPhone 4.”

• Battery: After removing a series of tiny Pentalobe screws, and the phone’s back cover, “the battery is very easy to replace,” says iFixit.

• Chip set: In addition to the Qualcomm MDM6600, Apple has packed its A4 chip, as well as a touchscreen controller chip by Texas Instruments.

So there you have it: Apple could, if it so chooses, quickly and easily modify the Verizon iPhone 4 to become a “world phone” iPhone 5. (All it really needs is a SIM card slot.) That’s not to say Apple will do so, however. So we’ll believe it when we see it.

Topics
Video-editing app LumaFusion to get a Galaxy Tab S8 launch
The best iPhone car mounts in 2023: top 10 best ones you can buy
The best grocery list apps for iPhone and Android in 2023
My iPhone 14 Pro camera is ruined, and it’s all Apple’s fault
The best QR code scanning apps for iPhone and Android in 2023
A foldable iPad in 2024? This Apple insider is ‘positive’ it’s happening
How to sync your Outlook calendar with an iPhone
Secure Your Value: Lock in the price of your Verizon phone plan for 3 years
AirTag helps flyer find his AirTag – but not his missing wallet
Best Apple Deals: Save on AirPods, iPads, MacBooks and more
The Garmin Vivomove Trend is a powerful smartwatch with a sleek disguise
Anker’s newest chargers are a perfect pairing for the Galaxy S23
Best tablet deals: Save on Android tablets, iPad and more