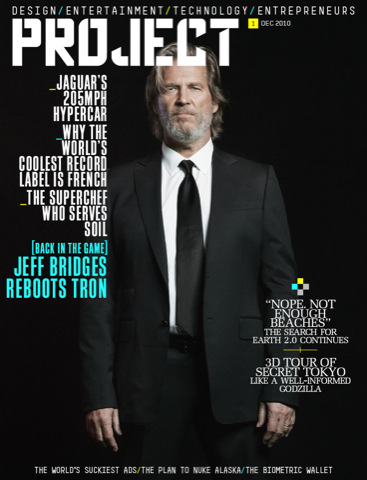 Richard Branson’s Virgin has launched the inaugural issue of its magazine designed to be read on Apple’s iPad. The magazine, dubbed simply Project, is currently on sale in the Apple App Store for $2.99 for issue number one. Project will focus on entertainment, design, technology, and entrepreneurs. The magazine plans to have a new issue launched monthly, but with new content constantly being added throughout each month. Engadget has reported that there may also be an Android version of Project in the works.

The magazine certainly has an attractive layout. The cover features a stony-faced Jeff Bridges who is set to discuss his role in the forthcoming Tron: Legacy movie. There’s also a feature on a French music label, an article on Jaguar’s C-X75 sports car, and a “3D tour of secret Tokyo.”

Project is being touted by Virgin as the first purely digital magazine. That claim sounds a little bit of a reach in a world ripe with digital publications that effectively fill the same role as traditional print magazines. It will be interesting to see if Branson’s effort actually succeeds in maintaining a readership willing to pay monthly fees to read what he’s offering – stuff that likely will be covered elsewhere for free. It should also be noted that Project also has it’s own blog as well as video teaser.

Rupert Murdoch, old media stalwart and CEO of News Corp., recently announced intentions to begin publishing an iPad-only paper called The Daily with a weekly subscription rate of $0.99. While the two publications aren’t likely to compete for audiences, there will probably be a sense of rivalry as the two attempt to establish the viability of old media business models — pay subscriptions — in the digital arena. Murdoch’s effort is expected to launch as early as the beginning of next year.

Video-editing app LumaFusion to get a Galaxy Tab S8 launch
Hive Social is my favorite Twitter alternative, but that’s not saying much
Don’t buy the wrong iPad during Cyber Monday — get this one instead
You won’t believe how cheap this iPad is, thanks to Cyber Monday
5 Apple gadgets you really should avoid this holiday season
The Galaxy Z Flip 5 might fix the Flip 4’s biggest design flaws
Don’t listen to billionaires like Elon Musk — app stores are fantastic
The best Samsung Galaxy S22 Ultra screen protectors for 2022
The most innovative tablets of 2022
Sunbird looks like the iMessage for Android app you’ve been waiting for
The most innovative smartphones of 2022
The most innovative smartwatches and wearables of 2022
These 6 things could make the Pixel 7a the perfect Google phone