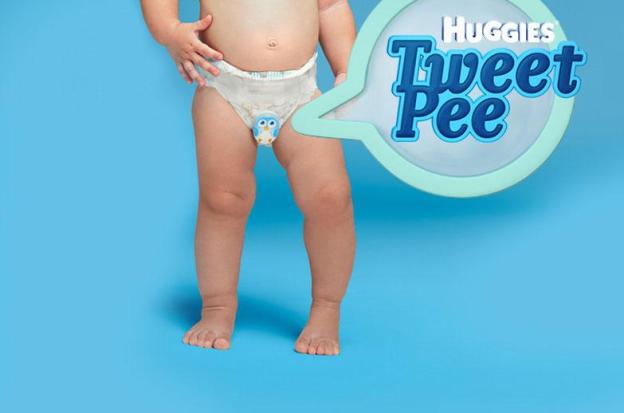 Sometimes I wonder what in Internet’s name you people are thinking. How is it possible we live in a world that is capable of sending people to space, turning DNA into art, 3D printing and at the same time … we have TweetPee.

I’ll save you the two minutes of your life you might waste going to the website desperately trying to find some clue that it’s a joke: It is real, and it is an app that tweets at you when your kid pees and needs to be changed. I cannot – nay, would not, ever, I promise – make this up.

The whole “people with kids need uber-specific social platforms!” thing is a joke.

Now, it may surprise you to discover that I am not a parent. I know, I know, you can feel the motherly vibes oozing from my keyboard out to your screen, but no, this womb has produced exactly zero children. Maybe that means I’m not really an authority on the type of digital innovation parents need in their lives – but given the fact that I am a person who spends all too much time on the Internet and has seen/held/assisted a human infant and you know … has common sense … I’m going to go ahead and say it:
Related

If you’re using a Twitter app to let you know that your child has peed (gross, gross, gross, I hate everything and everyone for making me have to type that), you are unarguably doing it wrong. Put down the phone and pick up the diaper. Log the eff off, OK? Nothing anyone is tweeting is more important than acting like a normal person and just you know, getting your offspring out of his or her own filth the good-old-fashioned way.

And unfortunately, it’s not just TweetPee. Take for instance, Cry Translator. It tells you what type of crying your kid is making. I can’t decide if I love or hate the idea of a parent pointing an iPhone at a sobbing, screaming heap of baby trying to figure out what all the crying means. Nope, I can decide: Yes, it’s hilarious. Yes, it’s messed up. Pick up your damn kid! Shake some keys at it! Stop pointing your phone at it, asshole! Your baby’s probably crying because it’s been incessantly tweeting at you that it needs to be changed.

(New game, everyone: Go out into the Twitterverse, find these TweetPee-produced tweets, and RT the hell out of them. OK, go!)

Whoever is out there thinking, “Well hot damn, do I have an idea tech-savvy parents will love!” and inventing this crap needs to get some serious perspective. Like go live in the desert for a year, or do some serious soul-searching on top of a mountain, or help homeless dogs in Mexico … because you are a monster.

These things are on the far, far side of parents-meet-Internet insanity, but even the more acceptable things being created in this vein are very not OK. The whole “people with kids need uber-specific social platforms!” thing is a joke. No, we don’t need a Facebook, Twitter, Instagram for people with children – ESPECIALLY when we damn well know they are going to hit the “push to Facebook” button every single time. Don’t pretend like you all want to keep pictures of the human you made for a small audience to see – you want me and my 20 proverbial cats to see it too, don’t lie.

Don’t let them do this to us! Don’t let the app developers trying to squeegee any remaining, untapped usefulness out of social networking play us against each other. Because they are: They are playing us like fiddles. They are trying to convince us that there is a silent, digital war between the Have-babies and the Have-nots. “You guys, you totally need a baby-only Instagram! Screw pictures of Jello shots, amirite?” or “Man, how much do you hate infants? This app replaces them with Game of Thrones memes, you singleton you!” ENOUGH.

Let’s all just use the same platforms and networks and apps and stop hatin’ because it’s not cute.

Especially you, TweetPee users. All one of you.

Topics
Video-editing app LumaFusion to get a Galaxy Tab S8 launch
Can’t stand using Instagram in 2022? This app fixes everything you hate about it
WhatsApp is copying two of Zoom’s best video-calling features
Yes, Twitter is down right now, and we don’t know when it’ll be back
Discord is making its Android app more like iOS, and in a good way
Time is running out to save $100 on the Pixel 7 for Cyber Monday
Samsung Galaxy Z Fold 4, Z Flip 4 get big Cyber Monday discounts
Why a Kindle Paperwhite is the best $100 you can spend on Cyber Monday
When is my phone getting Android 13? Google, Samsung, OnePlus, and more
This Amazfit fitness tracker is $35 for Cyber Monday, and it’s selling fast
This 10-inch Lenovo tablet is $129 for Cyber Monday (selling fast)
Save $200 on the Samsung Galaxy Tab S7+ with S Pen for Cyber Monday
The best smartphone stocking stuffers for the 2022 holidays