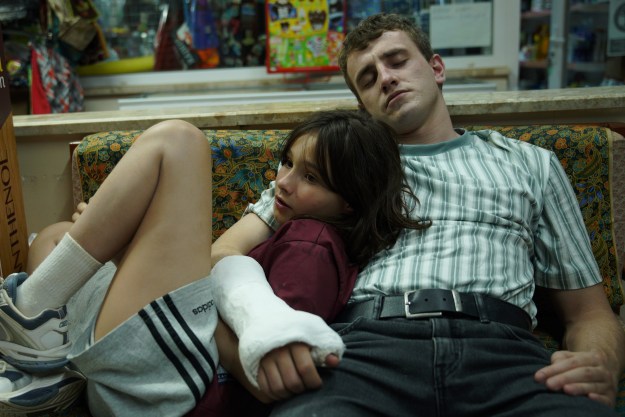 “Anchored by a stunning lead performance from Paul Mescal, Aftersun is one of the year's most moving and unique movies.”

Charlotte Wells’ directorial debut, Aftersun, is an open-hearted, tender piece of filmmaking. It crackles and vibrates with the same kind of lived-in intimacy that has defined the works of filmmakers like Richard Linklater and Terence Malick. Like those two auteurs, Wells has an ability to turn silence into its own special effect, one that makes you lean in further and feel as if you can smell the same musty air as the characters you’re watching on-screen.

There are many moments like that in Aftersun, a film that isn’t afraid to let its characters pause, breathe, and observe the world around them. Rather than detach in these brief minutes of respite, don’t be surprised if you feel yourself sinking further into the film’s meditative mood.

But there’s something else lurking beneath the surface of Aftersun. Underneath the film’s moments of joy, sadness, and togetherness, there is a yearning. It’s present in Aftersun’s opening scene, which introduces a young father, Calum (Paul Mescal), as he dances around a hotel room and avoids answering the personal questions his daughter, Sophie (Frankie Corio), is asking him from behind her video camera. We watch Calum through the lens of Sophie’s digital camcorder, but it’s only when the recording comes to an end that we realize we’re not the only ones doing so.

As the recording freezes on Calum’s blurred face, a reflection suddenly forms over the entire image. In quick succession, we realize not only that the recording itself has been playing on a TV the whole time, but that it was this previously unseen figure who turned it on in the first place. In terms of visual tricks, this opening moment in Aftersun is one of the best of the year, and it establishes Wells’ ability to imbue even the most minute of details with stunning levels of emotional significance. It is, in other words, the perfect opening note for Aftersun, a film that creates massive ripples of emotion out of the smallest pebbles.

A tale of memory and loss

Over the course of Aftersun’s 101-minute runtime, the details of its story gradually become clear. Slowly, we realize that the reflection in the film’s opening scene belongs to an older version of Sophie (Celia Rowlson-Hall), who has taken it upon herself to revisit some of the digital recordings she has from a trip she took to Turkey when she was 11 with her dad, Calum. Aftersun is, therefore, essentially one long trip down memory lane. The few present-day detours it takes on the way toward its heart-stopping conclusion only further imbue Sophie and Calum’s trip with an even greater sense of heartbreak and loss.

Sophie has, it turns out, begun excavating her memories in the hopes that she might finally be able to understand her father, who died shortly after his and his daughter’s fateful trip together. We’re never told how Calum died, and Wells never wastes any time exploring the 20 years that have passed since Sophie’s final vacation with him. In fact, Wells’ script for Aftersun never verbally communicates any of this information. The film, instead, establishes its “plot” through images and details that become impossible to forget. A handful of sequences in which Rowlson-Hall’s adult Sophie calls out to Mescal’s Calum in a dark, strobe-lit nightclub, for instance, make her character’s desire to reconnect with her father even after his death startlingly, heart-wrenchingly clear.

The film contains one of the best performances of the year

Wells brings the same level of restraint to her depiction of Calum, a mysterious figure whose internal pain is only made apparent by the knowledge of what ultimately happens to him. Mescal, for his part, turns in one of the year’s more well-calibrated, lived-in performances. He, in collaboration with Wells, builds a complete character out of nothing more than a series of short emotional breaks and long, contemplative silences. It’s a testament to the line Aftersun ultimately rides that we’re able to simultaneously understand why Corio’s younger Sophie was so mystified by her father and also discern with devastating clarity the same pain within him that Rowlson-Hall’s older Sophie can’t unsee.

Wells’ script never makes the mistake of spelling out Calum’s issues too clearly. Aside from one small scene in which Calum tells his curious daughter about a disappointing birthday from his childhood, we’re never truly allowed into his mind or given much insight into his past. Instead, Calum’s demons arise in small, all-too-relatable moments, like when his frustration over repeatedly trying and failing to put on a scuba suit briefly gets the better of him, the strain and embarrassment of it all turning his face red and ruining his mood.

Later, when Sophie talks about how she sometimes feels so tired that she becomes convinced her bones don’t work anymore, Wells’ camera briefly drifts over to Mescal’s Calum. Standing in front of a hotel room sink, Calum listens to his daughter speak and we watch, helplessly, as the fear that he’s passed his own problems onto Sophie overwhelms him. When he subsequently spits at his own reflection, it’s both a shocking moment of physical aggression and the only logical response for Calum, a man who frequently struggles to hide his own self-loathing from his daughter.

A slow burn movie that is worth your time (and patience)

Aftersun doesn’t hurry to get to its biggest moments of emotional revelation or catharsis. The film takes its time in every sense of the phrase, which leads to its second act feeling occasionally listless and meandering. For some viewers, the film’s deliberately languid pace may even distract from the poignancy of its story and, especially, its perfectly-executed final five minutes. Those who are able to get on Aftersun’s wavelength and give it the patience that it requires will, however, likely find themselves growing increasingly attached to its world and characters.

That’s because it’s ultimately irrelevant whether one identifies with Calum and Sophie’s relationship or not. It’s Aftersun’s desperate desire to find answers in Sophie’s memories that makes it so emotionally effective and compelling. Wells understands, better than most it seems, that memories are puzzle pieces that change over time. In Aftersun, Sophie’s memories don’t so much lose their shape as they do their size. Put together, they form a picture that would be complete were it not for the ever-widening spaces that run throughout it. The power of Aftersun doesn’t just come from how it explores the spaces that separate its memories from reality, but in how it attempts, perhaps fruitlessly, to close them.