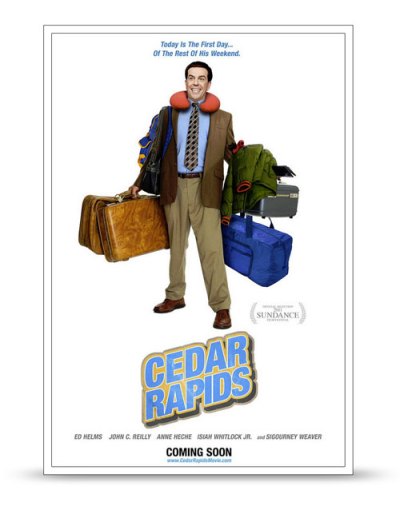 Stop me if you’ve heard this one before. There’s this guy, an average Joe. He is naïve to say the least, and carries around his innocence like a satchel. Because of that, people tend to use him a bit. Then the guy has his number pulled, and suddenly he is thrust into a situation where he must leave his comfort zone and find a way to grow as a person, in order to save the day. That right there is the entire story of Cedar Rapids, told in cliché-o-scope. Basically the story is nothing you haven’t seen before a few dozen times. But that isn’t necessarily a bad thing.

The plot won’t set your brain on fire with glee, nor will it challenge your soul in new and invigorating ways, but strong dialogue and excellent casting make this predictable and familiar feeling comedy likable and entertaining. There is a reason that audiences keep flocking to see films about people against all odds pulling out the win at the last minute. It is an archetype that appeals to us.  But you need something more these days to balance the predictability, something like a comedic script preformed by the right people for the job, and that is exactly what director Miguel Arteta (Youth in Revolt, The Good Girl) has given us with this film.

It is not the funniest movie around, and the story is nothing you haven’t seen before. As a result, Cedar Rapids is an interesting and likable film that often entertains, but probably won’t impress too much. Still, it is a fun film, and among the best of the year so far, although to be fair that isn’t saying a whole lot.

Arteta has a certain type of theme that he likes to reflect in his movies. You have the protagonist stuck in a fairly dull routine, and that character undergoes a transformation in order to become a more well-rounded character—usually after several insane things happen to them. If you have seen Youth in Revolt, you know the concept.

Tim Lippe (Ed Helms) is an insurance salesman in a small Wisconsin town who believes in his job and the people he represents. Having spent his entire life in the safe confines of his small town, Tim is a bit stunted in certain areas, and while he is certainly naïve, he isn’t gullible. Foolish and inexperienced perhaps, but his intelligence and personal values make up for things most of us take for granted, like never having flown or staying in a hotel.

Tim loves his job, and is enjoying a slightly one-sided relationship with his former elementary school teacher Marcy (Sigourney Weaver), when his award winning co-worker dies in a compromising situation and Tim’s boss, Bill Krogstad (Stephen Root), sends Tim to the “big city” of Cedar Rapids, IA for the annual insurance convention. Krogstad tells him that the company needs to win its fourth consecutive “Double Diamond Award”, or the agency may be forced to close.

Things do not go well for Tim, as his ideals are quickly challenged by the realities of the world around him. He is soon put in a situation where he must compromise his integrity in order to save his company, leading to a eye-opening realization about how things really are, and a plan to regain his pride as an insurance salesman and a man.

It’s not the most original plot ever, in fact you can probably name five similar plots in under ten seconds, but there is a reason why this particular plot keeps resurfacing. When it is handled well, as it is in Cedar Rapids, it is an entertaining experience. It just works, and the cast and dialogue help keep the familiar plot feeling fresh.

The Mad Capped Men and Women of the Insurance Community

The film works especially well because of the cast. Ed Helms (The Office, The Hangover) has made a career out of playing the likable and awkward character-type, and he does so again in Cedar Rapids. He is the nice guy that lacks confidence, and as a result, people tend to walk over him at times.  But there is a bit more depth to the character of Tim due to his past, which plays an important part in the formation of his current view of insurance salesmen and the world in general. Tim lacks a deceitful bone in his body, and those around him are affected for the better by it. Helms does a fine job with it and the film succeeds because of it.

The main plot is almost a secondary element to what becomes the story of Tim’s journey from small town bumpkin to fully realized person, and it is successfull primarily because of the work of Helm. The role isn’t anything that pushes Helm’s acting skills, but he plays the role well. Tim leaves his home with wonder in his eyes, and returns with a more powerful understanding of himself. But rather than having the world change who he is at the core, his innocence and ideals end up changing those around him instead.

When he arrives at the hotel, Tim is told that due to overbooking he will need to share a room with two others. The first is the mild-mannered Ronald Wilkes (Isiah Whitlock Jr.), who Tim finds a kinship with, and Dean Ziegler (John C. Reilly), a recently divorced malcontent that Tim was warned about. Joining them is Joan Ostrowski-Fox (Anne Heche), a woman who views the convention as an escape from her life, and a vacation from the responsibilities waiting for her at home.

Reilly manages a fairly amazing balance for his character. Compared to the milquetoast Tim, Ziegler is the wild man, meaning some of the funniest lines are found exiting his mouth and by contrast he eats up the screen. But he also forms a friendship with Tim that comes across as genuine, and once his motives are revealed, he becomes a supporting star in the overall story which helps the movie immensely. Reilly could easily have overdone it, but he complements the others around him rather than outshines them, proving again that Reilly is one of the most underrated actors working today.

Heche also turns in a memorable performance, and her role is crucial to Tim’s growth. She is also very funny in the role and her character helps to create a sense that the convention is something of a vacation, which helps to ground the movie back down when her past is revealed. She helps Tim party and loosen up, which then makes his fall all the more relevant as the truth behind some of his beliefs are questioned. Whitlock Jr., who most will recognize mainly from his role in The Wire as state senator Clay Davis, turns in an amazingly subtle performance that features one of the best running gags throughout the movie. There are parts when he simply comes to life and steals the show.

The supporting characters are also strong, including Kutrwood Smith as the President of the Insurance Convention responsible for judging Tim and awarding the Double Diamond Award, but Alia Shawkat (Arrested Development, The Runaways) as the prostitute Bree who helps Tim come to terms with the things he has done, simply kills it.

Arteta gets the most out of his actors, and although the movie is about Tim, each character has a believable and understandable backstory that is usually just hinted at, but done well enough that you feel like you understand the motivations for everyone on screen. The plot may be on well tread ground, but the cast squeezes the most out of it.

Cedar Rapids is a comedy from start to finish, but sometimes the humor feels forced, especially when the notion of the “fish out of water” is hammered home. Thankfully these instances are few and far between, which stops the film from turning a fun story into a slapstick comedy, which it feels like it might become several times. The banter between characters is what really stands out, and while Reilly is the obvious source for many of the best lines, and Whitlock Jr. has a few great in-jokes, Helms is where the responsibility for the movie lies. His downward spiral and interactions with Bree during it are among the absolute best moments of the film and almost singlehandedly make it worth watching.

While the movie is funny, it is not the laugh a minute ride that you may expect based on the advertising. Just look at the goofy poster for the film above, which screams comedy. Some of the humor falls flat at times, and the predictable nature of the plot occasionally forces a handful of jokes that are somewhat cringe-worthy at times. Amusing might also be a better word to use for some of the humor than funny. The movie is enjoyable, and there are some solid laughs to be had, but there are also moments of averageness and mediocrity throughout. When the plot is forced to the forefront, which is often, the movie suffers. You know where the story is taking you, and many times the humor is a victim of the storytelling.

And there-in lies the rub. Cedar Rapids is a slightly underwhelming, but good natured story with lots of funny moments, but there isn’t enough humor to sell it totally as a comedy. On the other hand, neither is there a compelling enough plot to sell the film on the coming of age angle. Both aspects together make for an entertaining movie, but not one that will have much staying power. Most will watch this movie and feel good about having seen it, then quickly forget about it. The cast is top-notch though, and while the main plot points are predictable, the characters are all given just enough backstory and motivation that you understand and sympathize with them.

Cedar Rapids is a film you won’t regret seeing. It is slightly underwhelming, but that doesn’t make it bad. Not the best film of the year, but a decent offering nonetheless.

Some funny moments that stick with you. A great cast. Characters that you root for.

A familiar and predictable storyline. The comedy gives way to the plot too often. Stops just short of being great.