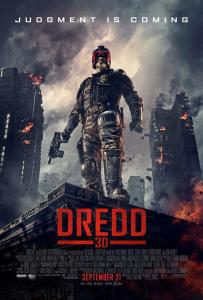 Let’s get this out of the way right at the start: To call Dredd 3D a remake of Sylvester Stallone’s laughable 1995 film is akin to calling Christopher Nolan’s Batman Begins a remake of Adam West’s Batman: The Movie. Neither film was created with its predecessor in mind, and both films are based on characters that existed long before they made their big-screen debuts.

Most importantly, however, is the fact that both Dredd 3D and Batman Begins offer what is arguably the most accurate, faithful big-screen interpretations of the comic-book characters that inspired them, and showcase exactly what’s made both characters so popular over the years.

Directed by Pete Travis (Vantage Point), Dredd 3D features Karl Urban (Star Trek, The Lord of the Rings trilogy) as Judge Dredd, one of the many stoic law-enforcement agents charged with protecting the residents of Mega-City One, a massive urban sprawl that stretches across the East Coast. After most of the world was rendered uninhabitable by the fallout of nuclear war, the surviving populace is now crowded into a series of high-reaching “city blocks” containing thousands of people, with the Justice Department’s roaming Judges delivering on-the-spot sentencing for law-breakers.

When Judge Dredd and his partner are called to one such city block to investigate a crime, their actions attract the attention of violent gangleader Ma-Ma (Lena Headey) who puts the entire building on lockdown and tasks her gang with making sure the judges don’t leave the facility alive.

In the wrong hands, it’s a story that could feel too small for a character as popular as Judge Dredd, but Travis and screenwriter Alex Garland (The Beach, 28 Days Later) have done an impressive job of making it a perfectly-fitted introduction to both the main character and the dystopian world he inhabits. When surviving the day is a legitimate concern each and every day, there’s little room for humor and the sort of forced pathos that took the 1995 film so far astray from its source material, and this is a situation Dredd 3D seems keenly aware of, opting to fill out the story with wince-inducing ultra-violence that’s more appropriate for a bleak, savage environment like Mega-City One.

Still, Dredd 3D manages to mine quite a bit of beauty from this abundance of violence, with Travis showing an uncanny knack for slow-motion shots that are not only organic to the story (many of the characters use a drug that makes time seem to slow down), but also serve a real purpose in spotlighting certain elements of the action sequences. It’s an approach that directors like Zack Snyder would do well to study, as it elevates slo-mo from filmmaking gimmick to legitimate storytelling device.

As for Urban himself, the veteran actor goes a long way toward erasing memories of Stallone’s version of Dredd. Staying true to his comics counterpart, Urban’s Dredd is never seen without his helmet, and he manages to be a character you can root for despite sporting an ever-present frown and little-to-no emotion. Judge Dredd isn’t an easy character for an actor to inhabit if you stay true to his roots, as he’s devoid of any interest in human relationships and is almost robotic in his single-minded adherence to the law. Essentially, he’s more Robocop than actual living, breathing cop, but Urban does a brilliant job of making the character seem less a caricature and more the urban antihero and product of the environment he’s supposed to be.

Headey also serves up a memorably vicious character in prostitute-turned-gangleader Ma-Ma, and Game of Thrones fans will probably see some similarities between the cold contempt for life she shows in this film and her take on Cersei Lannister, the calculating matriarch she plays in the HBO television series. Olivia Thirlby is relegated to a second- or third-tier supporting role in the film as Dredd’s psychic partner, Judge Anderson, though she makes the best out of the role and most importantly, doesn’t distract from Urban’s performance as Dredd.

Chock full of impressive action sequences and talented actors packed into a fantasticly detailed, grimy set, Dredd 3D is the movie the character has always deserved, and proves that you don’t need the intimidating budget and star-power of a Hollywood tentpole film to bring a character like Judge Dredd to life on the big screen.

Much like what Nolan and Bale did with Batman Begins, Travis and Urban have identified the most essential elements of the character and built a story around those qualities rather than the other way around. It’s an approach that anyone looking to make a comic-book movie would do well to embrace, and here’s hoping audiences give Dredd 3D the warm welcome it deserves.