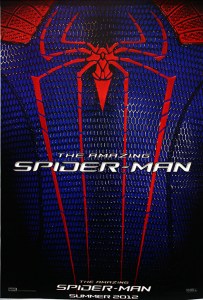 The reduced presence of upcoming, high-profile comic book movies like The Dark Knight Rises and The Avengers at this year’s Comic-Con International in San Diego doesn’t appear to have affected the flow of news out of the annual event. In fact, it appears to have given an early boost to the profile of films like The Amazing Spider-Man, Sony’s reboot of blockbuster franchise that saw it’s first trailer arrive online yesterday and its first poster hit the ‘net today.

Spotted on the show floor at Comic-Con by FirstShowing.net, the new poster offers a close-up view of the logo adorning Peter Parker’s new costume. A bit more detailed and noticeably more textured than the costume worn by Tobey Maguire in the prior three-film franchise, the suit worn by star Andrew Garfield has a number of other differences from its predecessor, too.

While they’re not featured in the new poster, Spider-Man’s web-shooters have also undergone a significant redesign. Instead of the organic webs expelled from Maguire’s wrists and favored by director Sam Raimi in the earlier films, Amazing Spider-Man director Marc Webb will be going back to the character’s roots and using a pair of mechanical web-shooters strapped to Garfield’s wrists.

We got a look at the new suit in action just 24 hours ago, thanks to the first Amazing Spider-Man trailer, which concluded with a first-person perspective on one of Spider-Man’s journeys across the rooftops, up the walls, and through the air around New York City.

The Amazing Spider-Man is expected to be one of the highlight projects at this year’s Comic-Con, which kicked off last night (Wednesday, July 20) and runs through the upcoming weekend.