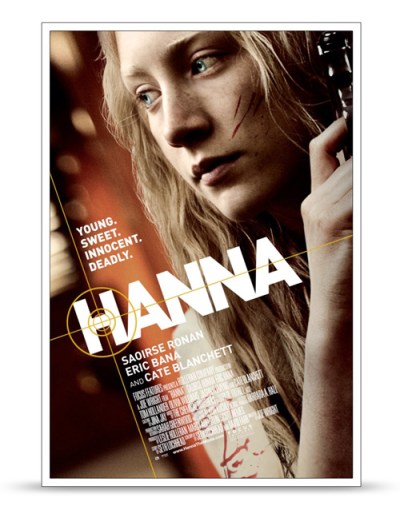 When people are looking back at Hanna years from now, it will probably be remembered primarily for launching the career of Saoirse Ronan, who is destined for stardom. To be fair, many people already know her name from her roles in films like The Lovely Bones, City of Embers and Atonement, but this film gives her the vehicle to take a totally original character in Hanna, and stretch her remarkable acting muscles.

The film begins with Hanna (Ronan) alone in an forest in Finland, hunting an elk. After the kill she is attacked by her father Erik Heller (Eric Bana) in a way that is meant to help trainer her, and from that point on the tone is set and you know that Hanna’s life is different from most.

Isolated in the Arctic Circle all her life, Hanna is an expert at many things, but a novice in some of the most fundamental things that people take for granted. She can speak a dozen languages, but she has never heard the sound of music. When her father brings her a box and tells her that pressing the button on it will bring Marissa Wiegler (Cate Blanchett) down on them and force them to fight, it is just a matter of time before all hell breaks loose.

When Hanna inevitably presses the button, Wiegler, a CIA agent, is quick to respond, thinking that it is her old CIA asset, Erik Heller. When they find Hanna, they bring her to a secret location, where Hanna thinks she puts an end to Wiegler and escapes into what turns out to be Africa.

As Hanna travels to meet her father at a pre-arranged location, she discovers life for the first time, and begins to experience the things that most people deal with on an everyday basis. She listens to music, makes a friend, hangs out with a boy, and even has her first kiss. Then as she realizes that her pursuers are still on her, she begins to discover secrets about her own past that make her question everything.

Different crowds are going to have different experiences with this movie. Those that go in without expectations may leave feeling that they have seen one of the best movies of the year. Those that are expecting a spy story about an assassin will only get half the film that they are hoping for and might think that there are some slow sections in the middle. But beyond the fighting and the spy angle, Hanna is a story about Hanna. She is a trained warrior on the run from CIA-hired goons, but it is always about the journey of a girl who is trying to discover how everything–including herself–works.

The cast does not disappoint, and Hanna offers a few of the strongest performances of the year. Ronan will be a star, or at the very least a much sought after actress after this film. Even if people hate it, it’s hard to find any flaws in her work here. Some may not like a few aspects of the plot, and there are a couple of odd film tricks that may turn others away, but Ronan takes a difficult role that is totally original, and gives a memorable performance.

Bana is similarly strong as Hanna’s father, the former CIA agent who stood against the agency to protect his daughter from Wiegler. His screen time is limited, and he is a secondary character to Hanna, but he eats up the screen when he appears and disappears into the role of a concerned father who just happens to be able to beat the hell out of people.

Blanchett, on the other hand, is strong in her role, but it is a weird role to begin with. She affects a strange southern accent that is meant to give her a quirky personality, along with some of her idiosyncrasies, like her affinity for sparkling teeth. And this is where Hanna falters slightly. The film is so focused on Hanna, that the enemies chasing her—Wiegler and her hired help, Isaacs (Tom Hollander) and his crew—become stereotypes, and their characters are never fleshed out.

Wiegler is a “rogue” CIA agent, while Isaacs and his henchmen are German Aryan nation members with a penchance for perversion. They are bad guys because they are bad guys, and there really isn’t much more to it than that.

But that is a deliberate decision by Wright, as the film is something of a fairy tale for Hanna—a fact that is not-so-subtly shown again and again through traditional fairy tale imagery beginning with the first scene of Hanna in a remote forest. But it can be heavy handed at times to say the least. There is one scene in particular where Wiegler emerges from an amusement ride shaped like the Big Bad Wolf that makes dares you to not make the fairy tale connection.

If there is any criticism to level at this film, it belongs solely on the shoulders of Wright, who chooses to invoke a certain visual style that hits or misses with nothing in between. In one scene Hanna is running, and the camera reverses the image to look upside down, then back to normal, then back to upside down, and so on. It is meant to simulate a pulse pounding chase, but it is slightly annoying and gimmicky. On the other hand, Wright has a great eye for action, and one scene with Bana being pursued into a subway where the camera never cuts, is sure to be talked about.

In general, Hanna is an amazing film with a few failings that all seem to come from the idea of simplification. The plot is meant to mimic a fairy tale for Hanna, so the bad guys and reason for them chasing her are both uninspired and unoriginal, which are in contrast to the totally original character. There is also a bizarre decision to begin a seemingly important plot thread, build up and intense climax, then never bother to resolve it. It doesn’t affect the story, but it feels like it is just forgotten. You can guess a few possibilities, but that makes the whole idea of it feel pointless, and it would have helped add emotional weight to the final showdown.

The soundtrack by The Chemical Brothers has also received a fair amount of attention. It is well done, and at specific moments adds to the film’s action sequences extremely well. In the slower moments though it is somewhat forgettable, but maybe that is exactly what it should be. It doesn’t have the impact that Daft Punk’s soundtrack did on Tron: Legacy, but it is a welcome addition.

Minor quibbles aside, Hanna is a film that has flashes of genius in it, from both the cast and the crew. A few stumbling points stand out, but they can be overlooked in regards to the overall package, which is a well-made, well-acted, and enjoyable movie.