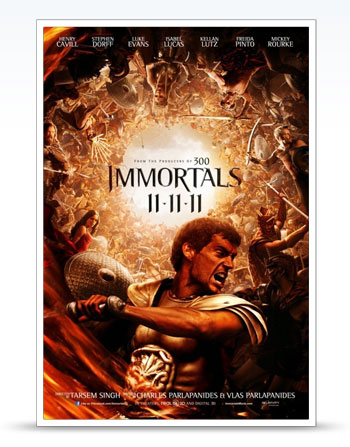 If director Tarsem Singh’s (The Cell, The Fall) new swords-and-sandals adventure Immortals were a car, it would be a high-end speedster, full of roaring power, lightning-fast speed, and beautiful to look at whether it’s in motion or standing still. And like taking a trip in a good sports car, you might not get a well-rounded experience from Immortals, but you will get a ride to remember.

In Immortals, British actor Henry Cavill (Man of Steel, The Tudors) plays Theseus, a peasant chosen by the gods to stand against the conquering hordes of King Hyperion, played by Mickey Rourke (Iron Man 2, The Wrestler). Assisting him on his quest is a snarky, escaped prisoner played by Stephen Dorff (Public Enemies, Backbeat), and a beautiful oracle played by Freida Pinto (Slumdog Millionaire, Rise of the Planet of the Apes). There’s a hefty helping of Greek gods, too – but we’ll get to them in a moment.

Best of both worlds

In many ways, Immortals is very much a mash-up of Singh’s trademark visual flair (which was showcased in his surreal horror film The Cell) and some of the most prominent recent examples of the swords-and-sandals genre, like 300 and Clash of the Titans. The storytelling side of Immortals falls more in line with Clash of the Titans due to its heavy reliance on super-powered gods and magical creatures instead of historical events, but its action scenes are more reminiscent of – and actually improve upon – the most impressive sequences of 300.

Basically, if you thought the breathtaking, slow-motion battle scenes in 300 were something to behold, Immortals takes that style of action sequence to the next level, and makes every tussle an epic brawl.

But it’s not just the action that makes Immortals a visual treat. Possibly the greatest achievement in the film is Singh’s use of elaborately detailed set pieces and costumes. It’s in this area that there’s the greatest resemblance to The Cell, as every setting and every piece of clothing worn by his characters drip with purpose.

When The Cell hit theaters back in 2000, it was widely recognized for its brilliant visual elements, and even received an Oscar nomination for its makeup effects. Singh injects Immortals with a similar flair, offering up one environment after another that features more detail in the brief time it’s seen than most films’ entire lineup of set pieces.

The characters’ costumes receive a similar level of attention in Immortals, with the gods each sporting elaborate headgear that straddles the line between silly and regal. Poseidon’s helmet, for example, features a pair of massive seashells held in place by sculpted gold waves. It looks a bit ridiculous, to be honest, but amid all of the other elaborate trappings of Singh’s world, it makes a weird sort of sense.

On the human side, Rourke’s evil titan king sports a helmet shaped like the head and mandibles of a massive beetle – one of the most bizarre costumes of the bunch. It goes so far to the “weird” side, in fact, that it almost becomes another reason to see the film. (Try to imagine the grizzled actor delivering villainous lines while wearing a big bug helmet, and you get the idea.)

Still, as I hinted at earlier, while Singh offers up some of the best examples of what he does well in Immortals, there’s still no shortage of deficiencies in the film. The story’s reliance on gods and magic isn’t the only similarity the plot shares with the recent Clash of the Titans remake. Immortals is similarly plagued with confusing narrative transitions and plot holes that will bother even the most casual audiences. Though the cast clearly gives their best efforts, there isn’t a lot for them to work with as far as dialogue and character development.

As Theseus, Cavill clearly wants to sell his character’s evolution from a meek peasant to a sword-swinging leader of men, but the story never quite establishes the former, while spending lots of slow-motion shots on the latter. Sadly, the speech his character makes late in the film in order to rally a city of soldiers to fight against Hyperion’s oncoming horde just might be one of the least inspiring pre-battle speeches ever filmed.

The trouble lies with more than just Cavill’s role, though. Much of the film’s cast does their best with the material they’re given, but a talented set of actors can only do so much when the story doesn’t quite flow. Luckily, Rourke’s character in Immortals doesn’t stray far from what the veteran actor does best, and it plays to his burly, threatening, and occasionally mumbling menace. Dorff and Pinto make a perfectly acceptable sidekick and love interest respectively, and the cast of actors playing Greek gods look good in gold while making some of the film’s most spectacular action sequences seem impressively fluid.

In the end, it all comes back to that initial sports car analogy. For all its attention on speed and beauty, the Immortals isn’t going to win any points for fuel economy or handling in harsh weather. While Singh’s mythology-inspired adventure takes visual elements like action and scenery to a level few filmmakers have achieved, its shortcomings in story, dialogue, and character development are still there for everyone to see.

And while that means the film is likely to have more than a few detractors, those who go into the theater knowing what to expect will find a lot to like in Immortals – and find themselves in the passenger seat for one heck of a ride.