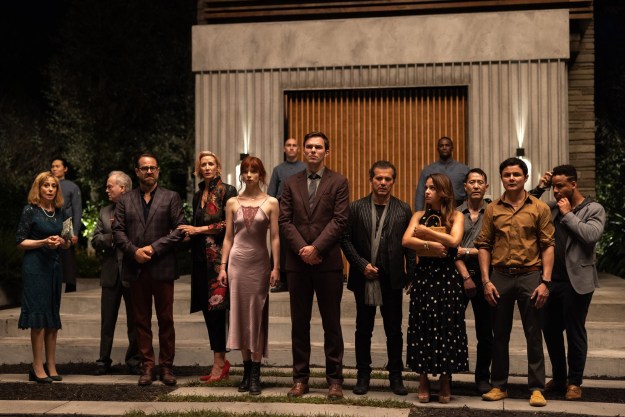 “The Menu is a scathing, satirical thriller that makes it easy to get lost in the power of Ralph Fiennes and Anya Taylor-Joy's lead performances.”

The Menu is a charbroiled, scathing piece of genre filmmaking. Its script, which was penned by Seth Reiss and Will Tracy, takes so many shots at so many targets that the film ends up having the same texture and bite as a marinated bird that’s still got pieces of buckshot in it. If that makes it sound like The Menu is a scattered blast of satire, that’s because it is, and not all of the shots that the film takes prove to be as accurate as others. It is, nonetheless, one of the more enjoyable and engaging social thrillers that have come out of Hollywood’s ongoing post-Get Out era.

That’s due, in no small part, to how The Menu cleverly uses the increasingly popular realm of avant-garde cooking as a vehicle to make many of its often blisteringly funny critiques of the world’s social and financial elite. By setting its story in a field that has only been explored in a handful of recent films, The Menu is largely able to keep many of its increasingly common social critiques from growing stale. The success of the film can also be directly linked to Ralph Fiennes’ straight-faced, pitch-perfect performance as the orchestrator of all of The Menu’s many unpredictable thrills, chills, and laughs.

Fiennes stars in the film as Julian Slowik, a celebrity chef who has taken to living full-time on the isolated island where his high-end restaurant, Hawthorne, is located. The Menu doesn’t follow Slowik, though. Instead, it takes the perspective of Margot (Anya Taylor-Joy), a woman who has been invited by Tyler (Nicholas Hoult) to take part in an exclusive night of dining at Hawthorne. The pair are joined on their voyage by a number of snobbish patrons, including an arrogant food critic (Janet McTeer), a has-been movie star (John Leguizamo), and a trio of oblivious financial sector bros.

Once Tyler, Margot, and the rest of Slowik’s diners arrive for their night at Hawthorne, though, things quickly begin to take a dark, surprisingly morbid turn. Before long, it’s clear that Slowik’s plans for the evening aren’t nearly as simple as his latest batch of patrons expected. His vision for the night is threatened, however, by the presence of Margot, who Tyler invited at the last minute after his original date (understandably) broke up with him.

Margot’s arrival allows The Menu to become not only a high-tension thriller, but also a battle of wills between her and Fiennes’ Slowik, who she has far more in common with than either might initially think. Although that might sound like a lot for The Menu to take on, especially given the delightfully mean-spirited streak of satire that runs throughout it, the film manages to successfully blend its thriller, horror, and comedy elements together for most of its runtime. Even in the moments when The Menu leans a little too hard into comedy or horror, most of which occur during its messy third act, the film always corrects itself quickly enough to stop it from going totally off the rails.

The film’s performers also clearly understand the assignment that they’ve been given and, as a result, everyone on screen manages to turn in performances that feel both slyly tongue-in-cheek and totally committed. Of the film’s many performers, no one stands out quite like Fiennes, though, who is given a role in The Menu that allows him to fully weaponize some of his greatest strengths, including his unique ability to combine Slowik’s attitude of knowing arrogance with a kind of raw, untempered rage.

Opposite him, Taylor-Joy turns in another reliably commanding performance in a role that really only lets her really spread her wings once, though the moment in question is one of the best that The Menu has to offer.  Hoult, meanwhile, gives a totally clueless performance as the ultra-annoying Tyler that not only calls to mind his scene-stealing turn in Yorgos Lanthimos’ The Favourite, but which also cements him as one of the more quietly versatile actors of his generation. Hong Chau makes a similarly effective mark as Elsa, the tempered but ruthless second-in-command to Fiennes’ Slowik.

Behind the scenes, director Mark Mylod and editor Christopher Tellefsen ensure that The Menu maintains a fairly brisk pace for the entirety of its 106-minute runtime. Even the film’s exposition-heavy opening prologue clips by quickly, thanks to the operatic, almost Bong Joon-ho-esque cutting style that Mylod and Tellefsen implement throughout it. While there are moments when it seems like The Menu could stand to be a little nastier and more gnarly, Mylod wisely knows when to pause his constantly roving visual style in order to allow the film’s more uncomfortable scenes to truly breathe and build.

As has been the case with many of the social genre thrillers that Hollywood has produced over the past five years, The Menu doesn’t totally stick its landing. The film’s third act, in particular, attempts to stack gag-upon-gag-upon-gag in the hopes of heightening The Menu’s stakes and tension, but most of them just end up creating unnecessary logic gaps. Those moments inevitably end up preventing The Menu from emerging as the kind of artfully prepared, five-star meal that its fictional chefs so desperately want to deliver. What The Menu does provide, though, is the kind of admirably bare-bones experience that’ll leave most patrons smiling and, above all else, satisfied.

The Menu is now playing in theaters nationwide. For more on the film, read our article on The Menu‘s ending, explained.

The best new podcasts for the week of November 30, 2019: Catch and Kill and more
Celebrity chef and author Anthony Bourdain has died at age 61
Weekly Rewind: Translating headphones, tech flops, Tesla trucks, and more
U.K. restaurant chain offers ‘Stranger Things’ menu till end of November
The best Roku TVs of 2022: which should you buy?
Where and when to watch the Harry & Meghan documentary series
AMC Plus Free Trial: Stream hit shows like The Walking Dead for free
5 Marvel characters who deserve their own movie or TV show
DAZN Free Trial: Can you watch live boxing for free?
HBO Max Free Trial: Can you stream hit shows for free?
Amazon Prime Video Free Trial: Stream for a month for free
Showtime Free Trial: Get a month of streaming for free
Is there a Sling TV free trial? Here’s what you need to know