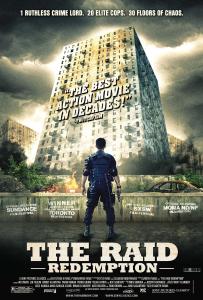 If you are looking for a film about the beauty of love or maybe the story of how there is an artist trapped within each of us, The Raid: Redemption isn’t the movie for you. If, however, you are interested in seeing a film where a guy kicks a drug dealer in the face so hard that he flies backwards off flight of stairs and nearly snaps in two when he hits a lower railing, then this is the film for you.

I have been to a fair number of screenings over the years, but The Raid: Redemption screening may be the first time I have heard critics say that they would happily turn right back around and rewatch the movie then and there. And I would have joined them.

A typical “action packed” movie has a lot of action in it. The Raid is nothing but action. From the first fight scene until the end, you are left almost breathless by the continual symphony of violence that repeatedly ups the stakes and impresses you with something new.

Several times throughout The Raid there are moments where you think that the movie can’t possibly top what you just saw, and then it does. Again, and again, and again.

The Raid: Redemption is a brutal, bloody, and unapologetic dance of violence and destruction that transcends the common action films that are highlighted by endless explosions and special effects, and instead offers one of the best action movies in years—arguably one of the best ever made.

It is almost an embarrassment to other filmmakers how simple, and yet compelling the story of The Raid is. A crime boss has taken control of an apartment building in the heart of a Jakarta slum and turned it into his own private castle. A police SWAT-like Special Forces team is tasked with breaking through the defenses and capturing him. The building is a fortress, and it is filled with some of the worst scum around. That is really all the setting you are given and all you need.

During the assault all hell breaks loose. For the rest of the film the movie is pure adrenaline, slowing only a bit to introduce a few story elements that help to push the action along. There are also a few moments that slow the pace but up the tension, and they are filmed and executed well.

Welsh Director Gareth Evans introduces the characters quickly and memorably. The main character, whose name you probably won’t even know until half way through the film (it’s Rama), is shown as a devout and pious guy with a child on the way. That scene is perhaps two minutes long and yet it tells you all you really need to know: he’s the good guy.

A quick confrontation about the tactics displays the differences between the main character, a rookie, and the grizzled Sergeant leading the assault (which is all description he requires). Then a quick scene with the crime boss doing some horrible things offers sufficient background about him and his two henchmen. And there you go: everything you need to know to enjoy the film is laid out in under five minutes of screen time, and amazingly it all works.

The character development is told like a haiku that is then padded by a lot of violence, blood, and phenomenal action. There are a few story elements introduced later, but they are truncated and give you just enough to understand purpose before the next action scene.

It is the tone and setting of the situation that really ties the film together though. It feels far more like a war film than a “cops versus robbers” movie. Outnumbered police are trapped inside a rundown skyscraper, forced to fight for their lives against several brutal psychopaths.

What more do you need?

The Raid starts off as a gun-based action flick, but it soon becomes more of a traditional martial arts movie—traditional in the sense that it mostly close quarter combat without firearms. The gunplay is good and it is well shot, but it is when the guns are tossed aside that the movie begins to amaze.

Going into too much detail on the actual fights would take away some of the surprises—and there are plenty. Even if you are a fan of the martial arts genre, there are moments that feel totally fresh and original. Part of that is credit to the way it is shot, and part of that is due to the exceptional fight choreography that sees people dispatched in some truly “holy crap” moments, over and over again.

And yet it still manages to make you feel immersed and invested. The tone and setting are so oppressive and even ominous that the film is compelling, and the action makes you excited to see what comes next.

There is a grace and style to every shot, and it lulls you into a fluid and natural rhythm. That helps make some incredibly complex and amazing scenes look easy, and you may need repeat viewings to catch everything.

One of the most impressive things about The Raid is that it was filmed for around a million dollars and still looks as good as any action film out today. The $1.1 million budget for this entire film would not even cover the catering costs for many of the high dollar, big-budget, special effects laden films today, and yet it is so much better than most. Part of that is a result of the filmmakers needing to work smarter, not just harder. That means there are very few trick shots–with the minor exception of the occasional sped up fight scene to make it look faster, but that is fairly common. There is no shaky cam or over used slow-mo.

The Raid: Redemption was first released last September, but it has flown under the radar for two very good reasons: First, it is an Indonesian film. Second, it is a martial arts movie, which has always appealed to a niche market. But there is a reason that Sony Pictures decided to roll the dice and distribute the movie in North America, and it is a good thing they did.

Another minor concern people may have about the film is the subtitles. For some, subtitles are a deal breaker in any situation, while for others they are a problem specifically in action films because they distract from what is happening on-screen. You really don’t have to worry too much about that in The Raid—there are possibly 100 lines of dialog in the entire film. You could watch it from start to finish and never read a word, and still be impressed by it.

The reason for the silly subtitle “Redemption” is because it is optimistically the first part of a trilogy. That is good news for us, but bad news for the returning actors, because they may need to set themselves on fire to top the action of the first film.

The Raid: Redemption just nails it on every level. The characters, although barely explored, are explained as much as you need them to be. The story not only justifies the action, but it enhances it. There isn’t much to it, but the scenario alone gives you most of what you need to follow along. And then there is the action, which sets the bar higher with each new fight, then amazingly continues to top itself repeatedly.

If you are a fan of action movies—and not just martial arts films, but action movies in general—you owe it to yourself to go see The Raid: Redemption. Then feel free to go back and see it again for good measure.

Where to stream The Bad Guys
35 years later, ‘Predator’ is a better satire than you remember
The best mysteries on Netflix right now
The best Netflix original series right now (November 2022)
The best horror movies on Hulu right now
The best horror movies on Amazon Prime (December 2022)
The best movies and shows on Shudder
Transformers brings the action to the ’90s in Rise of the Beasts trailer
Where you can watch The Great American Baking Show: Celebrity Holiday
Wednesday’s ending explained
The best British TV shows on Netflix
Harrison Ford returns as Indiana Jones in first Dial of Destiny trailer
The most underrated movies on Netflix