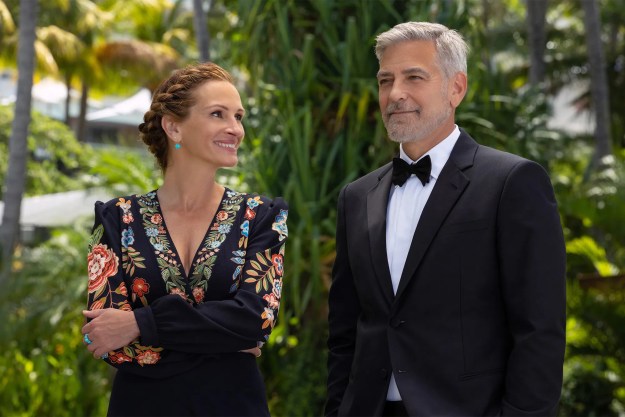 “Ticket to Paradise is an overly formulaic, cliché-ridden rom-com that, thanks to Julia Roberts and George Clooney's inimitable chemistry, still has the power to put a smile on your face.”

Ticket to Paradise feels like it belongs to a bygone era, one in which romantic comedies starring two reliably charming movie stars were a dime a dozen. Twenty years ago, the film, which reunites Julia Roberts and George Clooney as a divorced couple who team up to prevent their daughter’s wedding to a man she just met, likely would have come and gone and been one of the more forgettable summer releases of its respective year. Nowadays, Ticket to Paradise feels like an undeniably refreshing change of pace from so many of the action- and superhero-centric studio releases that Hollywood puts out every year.

More than anything, the film is a potent reminder of the power of movie stars. In an era where Hollywood seems to care less and less about its actors and more and more about the spandex-covered roles they fill, Ticket to Paradise reminds us of how much joy can come from watching two people who were born to appear on a big screen get the chance to go toe-to-toe with each other. Clooney and Roberts have, notably, both retained the same undeniable charisma that made them global icons in the first place, and Ticket to Paradise, to its credit, understands how little it needs to do when its leads are actually on the screen together.

The film, which was directed by Mamma Mia: Here We Go Again! filmmaker Ol Parker, doesn’t waste any time introducing its two stars, either. Through a series of overlapping scenes and quick cuts, Ticket to Paradise establishes the whirlwind romance that first brought Clooney and Roberts’ David and Georgia Cotton together, as well as the divorce that has soured their relationship ever since. By the time the film begins, David and Georgia have grown so tired of each other that they routinely call their daughter, Lily (Kaitlyn Dever), in order to make sure they won’t be seated together at any of her school events.

David and Georgia agree to temporarily put aside the grudges they hold against each other, however, when they learn that Lily has decided to abandon her post-college dream of becoming a lawyer in order to marry Gede (Maxime Bouttier), a seaweed farmer she meets while on vacation in Bali. Determined to prevent their daughter from jumping into the same kind of marriage that they did, David and Georgia begin plotting to secretly sabotage Lily and Gede’s wedding.

Odds are you already know where Ticket to Paradise’s plot goes from there. To say that the film’s script, which Parker co-wrote with Daniel Pipski, doesn’t reinvent the rom-com wheel would be an understatement. The film itself often feels like an amalgamation of every rom-com trope and cliché, and many of its minor gags are nothing more than slightly new iterations of jokes that a million other Hollywood comedies have already done. Consequently, while Roberts and Clooney are frequently able to inject infectiously playful energy into Ticket to Paradise’s otherwise stale script, the appeal of the film greatly declines whenever it cuts away from David and Georgia’s habitual bickering.

The romance between Dever’s Lily and Bouttier’s Gede, in particular, falls totally flat. The pair’s relationship is sketched so thinly that it’s impossible to become emotionally invested in their wedding, which causes major problems in Ticket to Paradise’s third act when Parker and Pipski attempt to make it the film’s key source of drama. While Dever and Bouttier are both charming performers, their chemistry isn’t powerful enough to enliven Lily and Gedes’ few scenes together.

Dever, specifically, feels miscast in a role that lacks the kind of edge that has helped many of her previous characters and performances stand out. (This year’s Romeo & Juliet riff, Rosaline, gives Dever far more to do in a similarly lovestruck role.) The film’s overreliance on Roberts and Clooney’s abilities also results in a number of clunky scenes in which both David and Georgia are asked to give unnecessary, exposition-laden monologues.

Had these scenes starred anyone other than Clooney and Roberts, they’d be near-unwatchable. However, even with two of the most formidable movie stars of the past 30 years taking turns in the driver’s seat, the scenes themselves still land with a dull thud. In its third act, Ticket to Paradise also makes the unfortunate mistake of replacing the bitter antagonism present in David and Georgia’s relationship with a shared, disappointingly straightforward romanticism. The final minutes of Ticket to Paradise, in other words, see the film shed most of the humor and tension that made it so appealing in the first place.

Despite all these flaws, Ticket to Paradise still emerges as a bubbly and breezy rom-com. Its most appealing parts may be its most obvious, but the film wisely chooses to lean into its place as an old-school star vehicle rather than trying to buck against it. In doing so, Ticket to Paradise lets Clooney and Roberts prove, once again, what Hollywood is missing out on by abandoning the rom-com genre and leaving it to die, slowly but surely, on the industry’s various streaming services.

It’s for that reason, in fact, that it ultimately doesn’t matter how frequently Ticket to Paradise feels like it exists solely so that Roberts and Clooney could go on vacation together. That may very well have been how the project came together, but at least, in doing so, Clooney and Roberts have given us a new rom-com that feels like it deserves to be seen on a big screen, rather than only half-watched on a streaming service in the middle of the afternoon.