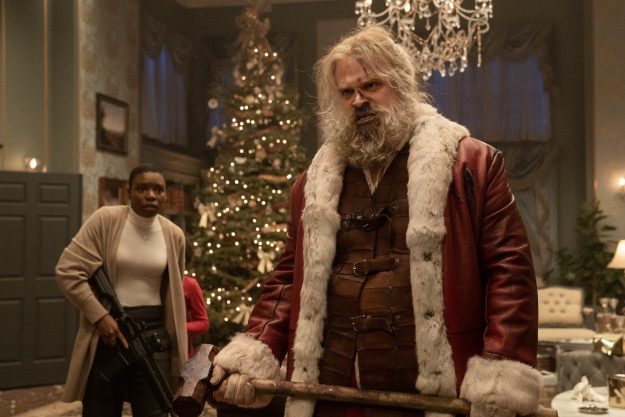 “Violent Night delivers on its wild premise and then some, and offers a bloody-good Christmas action movie.”

Violent Night isn’t the first film to deliver an R-rated Santa Claus story, but it’s one of the best if you find the idea of jolly old St. Nick engaging in a bit of the old ultraviolence appealing. Directed by Tommy Wirkola (Dead Snow) from a script by Sonic the Hedgehog writers Pat Casey and Josh Miller, Violent Night casts Stranger Things actor David Harbour as the bearded, gift-giving avatar of Christmas. Disillusioned by the state of the world and sliding boots-first into alcoholism, Santa finds his messy Christmas routine interrupted when a ruthless gang of thieves targets a mansion he’s visiting during his holiday rounds.

In order to protect a young girl trapped in the house, Santa is forced to slice, stab, and bludgeon his way through a horde of mercenaries on his naughty list to save not only the girl, but Christmas present and future. It’s a wild premise that could have easily been overplayed or underexecuted, but Violent Night manages to maintain a clever, entertaining balance between humor and hard-hitting action throughout its well-paced running time of less than two hours.

Like many of Wirkola’s films, subtlety isn’t the aim of Violent Night, which wears its influences on its woolly, red-and-white sleeve.

The recipe that went into this movie unabashedly borrows from several films of Christmases past. One part Bad Santa, one part Die Hard, and one part Home Alone, Violent Night drops them all into a blender with a hefty pour of spiked eggnog and Harbour’s gritty charm, then purees it all into a cocktail strong enough to make the holidays tolerable for even the most jaded Grinch.

Laughs are easy to come by in Violent Night, which never takes itself too seriously as Harbour delivers holiday-themed catchphrases while dispatching one villain after another in increasingly gruesome fashion. When his grizzled, bloody Santa Claus growls into a phone, “Santa Claus is coming to town,” the phrase takes on an entirely new weight that expertly walks the line between funny and genuinely threatening.

The film seemingly revels in barreling its way through one holiday- and action-movie trope after another, sometimes deconstructing the absurdity of them, sometimes leaning into them with clever embellishments or twists. The film’s spin on Home Alone-style house defense offers a little bit of both, for example, showcasing the more realistic, grisly potential of the sort of traps set by Macaulay Culkin’s character in the 1990 film, while also putting a fresh spin on how a child might envision home defense in the modern era. The blood and gore makes the sequences adults-only fare this time around, but the humor comes from a similar place as it did with Home Alone: watching villains get their comeuppance in cartoonishly violent fashion.

You better watch out (no, really)

As the film’s unlikely — and reluctant — action hero, Harbour is perfectly cast in the role of a hard-drinking, hard-living Santa Claus prone to relieving himself off the side of his sleigh while flying above cities and stealing from the liquor cabinets of sleeping homeowners. He’s a character you want to like, but his actions and attitude make it difficult to do so. His Santa is not a far cry from his Stranger Things character, whose world-weariness hides his frightening potential when the chips are down.

Harbour has a knack for juggling action and comedy, and Violent Night is a film that plays to his strengths in much the same way Die Hard did with Bruce Willis. Both Harbour and Willis channel a similar “Average Joe” action hero vibe, and Violent Night overtly samples from the Die Hard playbook on more than one occasion. When Harbour’s Santa has a weary heart-to-heart over a walkie-talkie with Trudy (Leah Brady), the girl trapped in the mansion, the scene clearly riffs on the moment of sincerity shared between John McClane (Willis) and Al Powell (Reginald VelJohnson) when the pair connected over walkie-talkies during a lull in Die Hard‘s tower siege that unfolds during a holiday party.

That’s fine source material to draw from, and Violent Night does so early and often, while also managing to avoid slipping into parody or too-familiar territory.

The rest of the Violent Night cast also does well in finding the middle ground between playing the premise straight and acknowledging the silliness of everything unfolding around them.

As the film’s primary villain — code-named “Mr. Scrooge” — , John Leguizamo doesn’t reach the high bars set by Hans Gruber (Alan Rickman’s iconic Die Hard villain) or Home Alone‘s Wet Bandits (Joe Pesci and Daniel Stern), but he’s still fun to watch in a way that prevents the story from losing momentum when Harbour is off-screen. Leguizamo is clearly having fun with the role, and that elevates his performance, but when you’re acting opposite an ass-kicking Santa Claus, the level of difficulty in matching that sort of spectacle is always going to be exceedingly high.

The rest of the supporting cast also keeps the energy high during the moments between Santa’s appearances, with Alex Hassell (The Boys) and Edi Patterson (The Righteous Gemstones) portraying the adult children of wealthy family matriarch Gertrude Lightstone, portrayed by Beverly D’Angelo (which creates yet another connection with Christmas films past, thanks to her National Lampoon’s Christmas Vacation role). Alexis Louder and Cam Gigandet portray the siblings’ respective partners, while Alexander Elliot plays the teenage “influencer” son of Patterson’s character, who shares more than a little in common with Judy Gemstone, her hilariously naive, smarmy character on The Righteous Gemstones.

With so many holiday films out there already and more released every year, it’s difficult for any film to stand out from the crowd. Violent Night has no problem at all doing so, though, and offers something well outside the traditional Christmas movie fare.

It’s certainly not for everyone — and definitely not for younger audiences — but if the idea of a surly Santa Claus with anger issues taking on a team of Christmas-hating mercenaries seems appealing, Violent Night won’t disappoint. In fact, it’s more likely to exceed eager audiences’ expectations, thanks to its talented cast, clever creative team, and a premise that it fully commits to from the start.

Given the typical expectations for holiday-themed films, it feels like a Christmas miracle that Violent Night even exists — and an even more amazing feat that it’s as wildly entertaining as it is. Merry Christmas, indeed.

Directed by Tommy Wirkola, Violent Night is in theaters now.

Where to watch The Nightmare Before Christmas
Where to watch A Charlie Brown Christmas
Where to watch Dolly Parton’s Mountain Magic Christmas
Best free Christmas movies on YouTube (November 2022)
The best movies on Amazon Prime Video (January 2023)
The best new shows to stream on Netflix, Hulu, HBO, and more
What’s new on Netflix and what’s leaving in February 2023
The best TV shows on Amazon Prime right now
Jacqueline Castel talks about her unique werewolf horror in My Animal
Best new movies to stream on Netflix, Hulu, Prime Video, HBO, and more
Royal Rumble 2023 live stream: How to watch WWE live today
7 things we wished Disney did differently with the Star Wars sequel trilogy
The best shows on Peacock right now