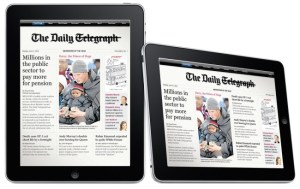 You’re going to have wait a little longer to check out Rupert Murdoch’s iPad news venture The Daily. Apple and Murdoch’s News Corp. have delayed the launch of the paper in order to address issues with the subscription model, according to the Wall Street Journal.

The Daily had been scheduled to launch on January 19, next Wednesday, at an event at the San Francisco Museum of Modern Art. The event was to be hosted by Murdoch and Apple CEO Steve Jobs.

According to the report the delay is a matter of “weeks, not months” and was mutually decided by Apple and News. Corp. Both companies found that Apple’s subscription service needs more time to get right.

Apple has been developing a new service that allows reoccurring “push” subscriptions that are automatically billed to customers’  accounts. Previously, users had to download and pay for new issues one at a time.

It’s important for both Apple and News Corps. to launch with a hassle free service in place. IPad publications haven’t had much success in retaining customers. And some of that has to do with the lack of a functional subscription model.

One thing is for certain, The Daily will launch and will likely launch sooner rather than later. Murdoch has invested heavily into digital-only newspaper, committing $30 million to the project and employing a staff of 100 people across two bureaus in New York and Los Angeles.

Topics
This new Best Buy program lets you lease a MacBook
UFC PPV: How much is Oliveira vs. Makhachev?
PayPal’s new Rewards feature adds Honey shopping discounts
Apple has a bunch of new products coming, but not this year
Returnal might be the first PC game to recommend this much RAM
Best Samsung Galaxy Note 20 deals for December 2022
Bad news: AMD may have launched RDNA 3 before it was quite ready
Microsoft Teams Premium uses AI to automatically recap your meetings
Intel’s upcoming laptop CPU may destroy even the best desktop chips
Boston Dynamics’ festive robot video has a surprise ending
Overclockers surpassed the elusive 9GHz clock speed. Here’s how they did it
Amazon starts drone delivery trials in California and Texas
What to expect at CES 2023, from mondo TVs to EVs