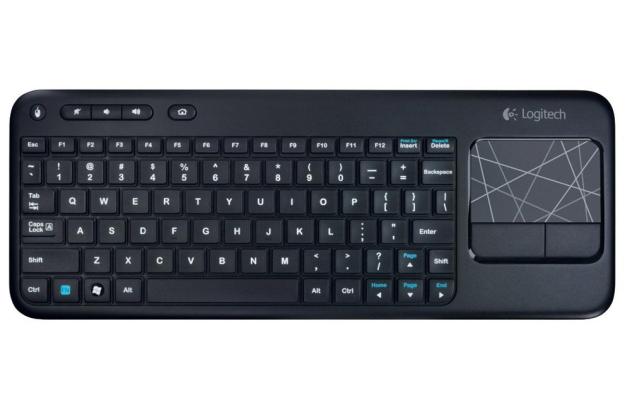 “The perfect size for the couch, Logitech’s lightweight K400 keyboard isn’t flawless, but you’ll be hard pressed to find a keyboard as good for the price.”

Computers are starting to invade the living room, enabling cord-cutters and die-hard PC gamers to enjoy content on the big screen. Software support for couch computing has excelled, with many media services and games now offering control via a remote or gamepad. But the keyboard remains stubborn. Bulky and large, even wireless keyboards are often useless away from a desk.

The Logitech K400 offers a solution. Small, wireless, and featuring a built-in touchpad, this set of keys seems ready to handle any situation. It’s large enough to be used for normal productivity, yet also small enough to be used on a couch with a home theater or gaming computer. Better still, you can grab this keyboard for $40 or less. Does all of this add up to a great peripheral, or does the low price translate to cheap construction?

Keyboards usually aren’t known for being over-engineered. And why should they be? Most spend their entire life hitched to a desk and move no more than a few inches left or right. Cheap plastics are common, and most users don’t really notice them.

The black upper panel and white bottom panel seem to be hitched together by a prayer, and the keyboard’s body creaks and moans when handled roughly.

Though build quality could be better, the design shows more thought. Four grippy rubber feet keep the keyboard in place during use on a flat surface, but they’re also relatively flat and rounded, which ensures they don’t hinder couch use. The keyboard also benefits from being small, light, and slim ¬– traits that make it easy to pick up and use in front of a television.

Typists and productivity nerds aren’t going to be happy with the K400’s feel. The keys are held up by rubber domes (common in inexpensive keyboards), which results in a spongy, vague experience. A compact layout makes matters worse by miniaturizing numerous keys and providing little space between them.

Only Logitech’s K400 nails the sweet spot: just big enough to use, yet small enough to store.

But let’s be real. This keyboard wasn’t built to offer an awesome typing experience. Flexibility is the goal, and it scores better from that perspective. The small keys are all located in the proper position and require little force to activate, making them easy to use while relaxing. Logitech also cleverly raised the top row of function keys, which provides a frame of reference for the user and makes them more accessible. That’s important because the function keys, among other things, can stop, play, or adjust volume.

Though the layout may be simple, using the keyboard in a dark home theater can be difficult at times. Backlit keys would solve this problem, but, alas, they’re unavailable. We hope Logitech at some point produces a more expensive version with backlighting.

Keyboards with touchpads aren’t unheard of, but they’re far from common, and the K400 is the only Logitech keyboard to offer one. The surface available for touch is small and lacks texture, which in turn makes navigation a bit of a chore if cursor sensitivity is left at default. Turning up sensitivity in Windows mostly solved our issue.

Two large mouse buttons sit below the touchpad. Their size makes them easy to find and activate, which is useful when using the device in a dark home theater. We also found that multi-touch scrolling worked well even in finicky software like games. However, because of the touchpad’s size, pinch-to-zoom was a bit tricky.

Frankly, we’d never recommend using this touchpad as a replacement for a mouse on a normal system. It is too small and, like all touchpads, not as precise. As a media PC controller, however, the K400 works very well and is superior to a traditional mouse or a home theater PC remote.

From materials to build quality, the K400 will always remind you that it only cost $40 (or less, if you shop online). This is a tool, and not a particularly well-crafted one at that.

We judge every tool by how well it performs its job, and, by that measure, we can find few complaints. We’d like backlighting and a larger touchpad, but at the same time appreciate the keyboard’s light weight. This is a versatile device that can replace virtually every input you’d normally use with a home theater PC remote .

As for competitors – well, what competitors? Products similar to the K400 are either absurdly small or larger than a standard desktop keyboard. Only Logitech’s K400 nails the sweet spot: just big enough to use, yet small enough to store.

If you’re looking for a lightweight, inexpensive keyboard equipped with a built-in touchpad, the Logitech K400 gives you the best bang for your buck.

Topics
This new Philips monitor is an ultra-bright mini-LED gaming beast
Is Microsoft’s new PC cleaner just an Edge ad in disguise?
UFC PPV: How much is Oliveira vs. Makhachev?
This gaming chair makes your butt a part of the action
Scientists find a surprising answer to the future of computers — paper
The Framework laptop is officially Thunderbolt 4 certified
EVGA’s lost RTX 4090 prototype shows us what could have been
Microsoft’s DirectStorage can now boost your game loading times by 200%
Here’s how you could protect your RTX 4090 from melting
Someone built a PC in a microwave, because why not?
Update Windows now — Microsoft just fixed several dangerous exploits
Nvidia’s RTX 4080 12GB may soon return, but not how you think
This gadget could turn your M1 Mac into a productivity beast