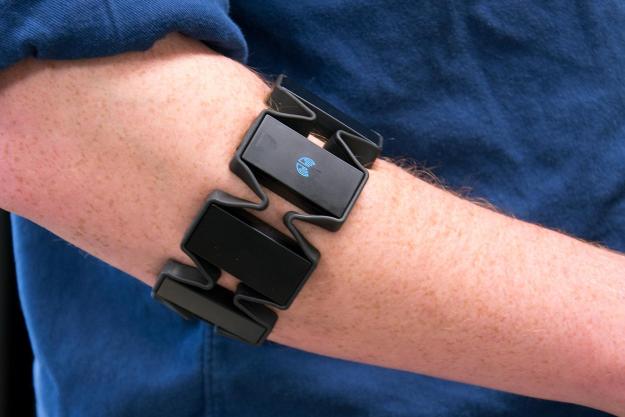 About two years ago, an unknown startup by the name of Thalmic Labs took the Web by storm with a teaser for its upcoming product, Myo. Using a technique known as electromyography, this little armband was able to read electrical signals from the muscles in your forearm, map them to gestures made with your hand, and control other devices with those gestures.

The device already has a sizable library of apps and plugins to offer.

This was (and still is) a radical departure from the way gesture commands are typically registered. Most gesture-control systems, like Microsoft’s Kinect, still detect movements with cameras, which can be thrown off by poor lighting conditions, distance, and simple obstructions. By drawing gesture information directly from your arm muscles instead of a camera, Myo circumvents all these problems — and also works with devices that don’t have a camera in the first place.

We had a chance to try an alpha prototype back at CES 2014, and were extremely impressed with what we saw. Now, roughly a year and a half later, the real deal is finally out on the market. So of course, we slapped one on and went to town.

To read the muscle activity in your forearm, Myo wraps it in eight different blocks, each of which contains a medical-grade EMG sensor. The armband also uses a three-axis gyroscope, three-axis accelerometer, and three-axis magnetometer to sense motion in any direction.

Muscle activity and motion readings are handled by an onboard ARM Cortex M4 Processor, which communicates with your devices via Bluetooth. For devices that don’t have Bluetooth functionality built in, Myo also comes with a Bluetooth dongle that plugs into any USB port.

Details on battery size aren’t readily available, but Thalmic claims the lithium-ion cell inside is big enough to keep Myo going for a full day of continued use.

Myo has undergone some major design changes since it was first conceived, but the final version is about as polished as you can hope for. It’s relatively slim and sleek considering how many sensors are stuffed inside its hull, and despite being a somewhat geeky piece of gear, it does have an undeniably badass look to it. You’ll definitely stand out while you wear it, but not enough to look like a complete doofus. This isn’t Google Glass. (Although it does work with it, so if you own Glass, you can totally geek out and use both devices at once.)

It’s also designed to fit just about every size of forearm, regardless of whether you’ve got willowy keyboard arms like mine, or burly lumberjack limbs that you can barely fit through your sleeves. Thalmic designed the band to be stretchy, so Myo fits snugly on most arm sizes, and can be expanded with a set of spacers if you’ve got more arm to cover. So long as your forearm is between 7.5 and 13 inches in circumference (19-34 cm), you’ll be able to wear Myo comfortably.

Setting up Myo is a strange and unfamiliar process, but despite being unlike you’ve ever used before, getting the armband up and running is pretty straightforward.

Once you’ve got it all charged up (via the included micro USB cable), all that’s left to do is establish a Bluetooth connection with your computer and run through the calibration process. Thalmic has put together a series of short videos to guide you through the process, which make it a breeze to get going.

After you slip Myo onto your arm, you’ll need to wait for a couple minutes for the sensors to warm up. The setup video explains that during this time, Myo is forming a strong electrical connection with the muscles in your forearm. After this bond is established, Myo vibrates to let you know it’s ready for sync.

To sync Myo and start using it, you need to perform Thalmic’s special “sync gesture,” which involves holding your arm parallel to the ground, rotating your wrist outward, and then swinging your forearm out 90 degrees like it’s on a hinge.

If this gesture works and Myo vibrates again, you’re off to the races.

Simply put, Myo’s gesture-recognition capabilities are everything they’re chalked up to be — so long as you have the sensors calibrated properly. That’s the trick. It might take a couple tries to get everything perfect, but once you do, Myo works like a dream.

The first thing we tried out was Thalmic’s presentation demo, which allows you to navigate through slideshows using gesture controls like tapping fingers together, waving your hand right or left, and opening and closing your fist. At first we had some trouble getting finger taps to register unless they were a bit exaggerated, but after a quick recalibration, Myo recognized all our motions instantaneously, even if the taps were light and quick.

After that, we tried it out on iTunes. It was awesome. Wave left and right to skip tracks, play and pause by spreading your fingers, and roll your fist to crank up the volume. Even when we were across the room, the gesture commands were recognized on the first try every time, and their corresponding action was executed without any sort of delay. So long as you’re within Bluetooth range of whatever you’re controlling, Myo is extremely responsive.

You’ll definitely stand out while you wear it, but won’t look like a complete doofus.

If there’s a downside to all this, it’s probably the fact that, in its current state, Myo can only recognize five different gestures and two types of motion. It’s not quite as dynamic as we had initially thought, and can only read finger taps, left or right waves, opening your hand, making a fist, and any up, down, left, right, and roll movements.

The sensors are likely capable of more –like, say, a “trigger pull” motion you make with your index finger, or pointing with two fingers instead of one– but right now it’s limited to the aforementioned gestures and motions. That’s not to say Myo feels incomplete or incapable in any way, though. You can do a lot with the available commands — we just expected more gestures to be available out of the box.

Flipping through your iTunes playlists and Keynote presentations is just the beginning. Thalmic put Myo in the hands of developers long before the general release, so now that it’s officially launched, the device already has a sizable library of apps and plugins to offer.

In the Myo Marketplace, you can download integrations for all kinds of apps, games, and utilities — Netflix, Spotify, YouTube, Minecraft, Civilization V, Kerbal Space Program, and tons more. There’s even one that allows you to control a Parrot AR drone like they showed in the pitch video two years ago.

Thalmic doesn’t really place any limits on how Myo can be used or what it can be used for, so developers have basically run wild with it – which is awesome, but you’ll definitely find that some of the integrations are much more practical than others.

One of the first applications I downloaded after setup was the Mac Desktop Utility, which allows you to do things like switch between desktops, take a screenshot, or show OS X’s Launchpad by using gestures. Cool, no doubt, but when you’ve already got a keyboard and a trackpad at your fingertips, it’s pretty unnecessary to throw gesture control into the mix.

For other things, however, Myo makes a whole lot of sense. Linked up to media players like iTunes or Spotify, it functions as a sort of wearable hands-free controller. The other night I wore it while I cooked dinner and didn’t have to whip out my phone to skip tracks on Spotify – I could just wave my hand in the air over the stove and continue sautéing my onions.

It also works as a great secondary input for video games. Minecraft, for example, is totally rad to play with gestures. Make a fist to attack, look around by moving your arm, cycle through your inventory by waving your hands, place blocks by spreading your fingers – it’s a really fun and intuitive way to play the game, and has us excited for future video game applications

Unfortunately, the marketplace doesn’t offer integrations for Xbox or PlayStation at the moment, but more and more apps are being added with each passing week, so if you’re keen on using this gizmo for gaming purposes, it might be a wise move to wait.

We’re a bit bummed that we can’t play Call of Duty with it quite yet, like Thalmic co-founder Aaron Grant showed us during CES 2014. But that’s the great thing about Myo — it’s got an open API, so new integrations will be released in the future, and the device’s range of uses will continue to expand over time. How many gadgets do you know that actually get more useful with age?

If you dig the idea of controlling the world around you with Minority Report-style gestures, look no further.

Topics
Video-editing app LumaFusion to get a Galaxy Tab S8 launch
This ASRock gadget turns your PC case into a proper monitor
Could the Huawei MateStation X dethrone Apple’s iMac?
This new Philips monitor is an ultra-bright mini-LED gaming beast
Is Microsoft’s new PC cleaner just an Edge ad in disguise?
Returnal might be the first PC game to recommend this much RAM
Best Samsung Galaxy Note 20 deals for December 2022
Bad news: AMD may have launched RDNA 3 before it was quite ready
Microsoft Teams Premium uses AI to automatically recap your meetings
Intel’s upcoming laptop CPU may destroy even the best desktop chips
Boston Dynamics’ festive robot video has a surprise ending
Overclockers surpassed the elusive 9GHz clock speed. Here’s how they did it
Amazon starts drone delivery trials in California and Texas