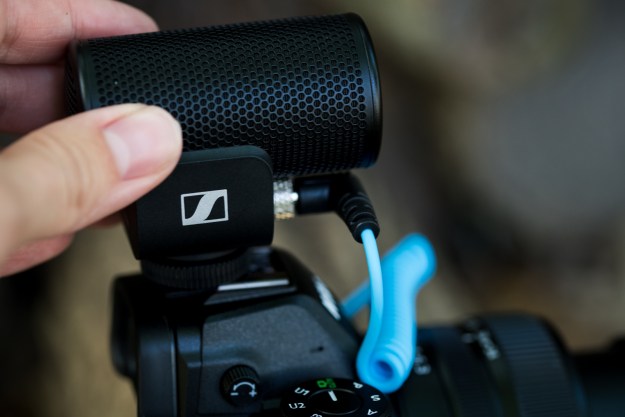 “The Sennheiser MKE 200 adds little to the process of shooting a video or to the weight of the camera, yet can dramatically improve audio.”

Nothing ruins a video faster than bad audio, yet sound is often neglected or downright forgotten by new videographers. The Sennheiser MKE 200 allows videography newbies to simply plug in and then continue to forget about the audio, but with less disastrous consequences than if they weren’t using it.

Weighing less than 3 ounces, the microphone itself adds little to the weight of the camera. With no controls or batteries, the microphone also keeps the actual recording process simple and is all but dummy-proof for newbies. Made for video, the microphone includes the proper cords for DSLRs and mirrorless cameras, as well as for smartphones, with a headphone jack or jack adapter.

As a photographer with only minimal experience in video — the MKE 200 is only the second video mic that I’ve tried — I am exactly who the microphone is made for. While lacking some of the more high-end features, the MKE 200 still makes capturing better audio almost as simple as plugging in a pair of headphones. I took the Sennheiser MKE 200 out for a quick spin to see if a $100 mic can really deliver better sound at the hands of an audio rookie.

What is a directional mic?

The basic mic built into many cameras is omnidirectional in nature. That is to say, it captures sound from all directions. A directional microphone, like the MKE 200, is set up to capture the sound that is coming from a specific direction. When a directional microphone is pointed forward away from you, noises coming from behind the camera will be much softer, if they’re detected at all. Directional mics deliver audio that’s more focused on the content of the video, rather than from every direction. This particular mic uses a supercardoid pickup pattern, which is a technical way of saying that it best picks up sounds immediately surrounding the mic, with a wider range coming from the front and sides.

While not as ideal as a shotgun mic, the MKE 200 delivers significantly better audio than the built-in mic on cameras by reducing background noise. Add-on mics also tend to be more noise sensitive and easier to accessorize since you can’t put a wind muff on a built-in microphone.

The barrel-shaped housing on the Sennheiser MKE 200 is shorter than many add-on mics — the entire mic could fit in the palm of my hand. Measuring less than 3 inches long, the microphone doesn’t add to the width of the camera, even on a mirrorless camera like the Nikon Z 5, staying within the space between the viewfinder and grip. It can easily fit into a camera bag, taking up much less space than most lenses.

Barely tipping the scales at less than 2.5 ounces, the microphone obviously doesn’t weigh down the camera. The biggest encumbrance is simply the cord, but its spiral design and placement in the front of the mic, however, keeps it largely out of the way on most cameras.

The MKE 200 is a true plug-and-play accessory — there are no controls or even batteries, which creates a minimalist look. The cord, which swaps out between one designed for DSLRs and mirrorless cameras and another made for smartphone use, is held securely in the front of the microphone with a twist lock. A simple plastic dial locks the microphone’s cold shoe into a camera’s mount. A tripod socket is also built into the mount. If shooting with a smartphone, you’ll want a case, gimbal, or another type of shooting setup that offers a cold shoe mount or tripod mount.

Besides the cord and mount, there’s nothing sticking out of the mic, which creates a sleeker design and potentially add to its durability. The microphone’s shock-mounting, which helps dampen the sounds from touching the camera itself, is on the inside of the capsule. Sennheiser says this design, besides boosting durability, also helps avoid rebalancing when working with gimbals.

The plastic construction is unsurprising for a budget accessory, but it doesn’t feel like it will break easily with typical use. A puffy windshield (or dead cat for the audio inclined) is also included and also feels well-made.

As an audio newbie, the MKE 200 was simple for me to set up. The three-step instructions are right on the box: Slide the mic into the hot shoe slot, plug in and lock the cord going into the microphone, then plug the opposite end into the camera.

Really, the only possible mishap I can imagine is installing the mic backward and accidentally amplifying everything behind the camera. Because of the shorter design, it’s not quite as obvious which way the mic goes in. The cord comes out of the front, and the name is on the back, which may feel a bit opposite of what’s expected. Still, even most audio newbies will install it correctly — when backward, the longer part of the barrel is pointing back and the cord covers the viewfinder, raising red flags that something isn’t quite right.

The plug-and-play design makes the MKE 200 a joy to use. You can plug it in and forget about it, which allows you to instead focus on the contents of the video. I’ve forgotten to turn on the one other battery-powered mic that I tried before, and the MKE 200 doesn’t even allow for that rookie mistake.

While the lack of any sort of controls is overall a good thing, there’s also nothing to indicate if the mic is working correctly. A simple green indicator light would have been a helpful addition.

While diminishing background noise, the MKE 200 picked up more subtle nuances than the camera’s built-in mic. I was able to capture the purr of my cat, which was barely discernible without the mic, and the buzz of bees.

The windshield does a good job of eliminating the crackle that’s typically associated with big gusts of wind. I could blow directly on the mic and heard only the sound of the air moving without the typical wind distortion.

The biggest downside to the MKE 200 is that, as a directional mic and not a shotgun mic, sounds further from the camera, even in the front, quickly become quiet. It’s not a mic that I would use to record videos with a zoom lens, but it is perfect for pairing with a 24-50mm lens and subjects relatively close to the camera.

Easy to use, the MKE 200 offers good audio quality to the nonprofessional ear. But, to be clear, as a photographer, I may have lower standards than an audiophile. I found the MKE 200 less echo-prone than the last budget mic I used, with better elimination of background noises. Vloggers and beginners, however, should be happy with the audio coming from this basic mic.

Simple to use, the MKE 200 is an excellent mic for vloggers and enthusiast videographers that find learning audio daunting. The plug-and-shoot design means there are no settings to mess with or even batteries to charge. The compact mic still manages to do a good job reducing background noises and picking up more subtleties than a camera’s built-in mic. It’s not ideal for working with longer zoom lenses, but for the price, that’s not unexpected.

The MKE 200’s biggest competition likely comes from the $100 Rode VideoMic Go, but there are a few key differences. The Rode’s shock mount is external, which may not be as durable as the MKE 200’s in the long run. Mobile phone users also have to buy an accessory for smartphone compatibility. On the flip side, the Rode also has a slightly different polar pattern, picking up less sound just behind the mic, which could be a more ideal solution for videographers who also want to reduce sound pickup from the sides.

The MKE 200 comes with a two-year warranty. While constructed largely from plastic, the internal shock mount helps make the mic more durable than other budget options.

Yes. If you’re an audio newbie or just looking for a budget mic, the Sennheiser MKE 200 should be at the top of your list. It’s small, incredibly simple to use, includes a smartphone option, and has an internal shock mount for more durability.

Topics
Video-editing app LumaFusion to get a Galaxy Tab S8 launch
Logitech’s new webcams are an alternative to Apple Desk View
How much storage do you need on your new iPhone 14? Here’s how to decide
2024 Chevrolet Equinox EV aims for affordability with $30,000 base price
HP unveils new IPS Black monitor with one key new feature
Returnal might be the first PC game to recommend this much RAM
Best Samsung Galaxy Note 20 deals for December 2022
Bad news: AMD may have launched RDNA 3 before it was quite ready
Microsoft Teams Premium uses AI to automatically recap your meetings
Intel’s upcoming laptop CPU may destroy even the best desktop chips
Boston Dynamics’ festive robot video has a surprise ending
Overclockers surpassed the elusive 9GHz clock speed. Here’s how they did it
Amazon starts drone delivery trials in California and Texas