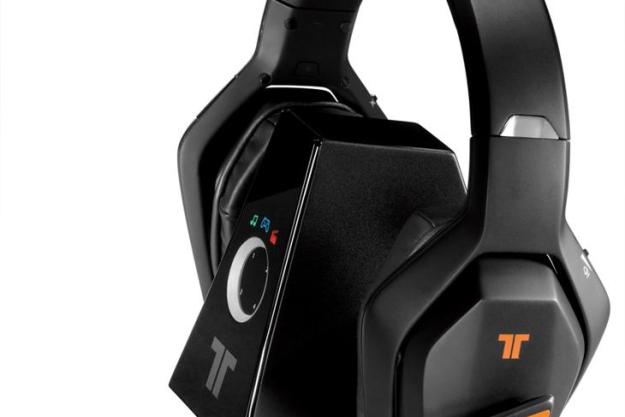 “You might find that competing offerings from Turtle Beach and Astro come out stronger in one category or another, but the Warhead is a brilliant piece of Xbox 360-exclusive gear that offers much to justify its $300 price.”

Let’s make this easy from the start: If you’re an Xbox 360 gamer and you’re OK with spending a moderate chunk of change on a wireless headset, no better option is out there than Tritton’s about-to-be-released Warhead 7.1 cans. You can expect to spend close to $300 on these puppies, but the mixture of stellar sound, solid design, cool extra features and exclusive Xbox 360 functionality (thanks to a licensing partnership with Microsoft) justify the premium price tag.

When you remove the protective slipcover, you’ll find a box in two halves that you can easily pull apart to access the hardware inside. Packing materials protect both the headset and its base station. The included cables, power adapter and manual are tucked into various nooks and crannies. Unpacking requires minimal fuss with only a couple of twist-ties holding things in place.

Setup is a snap, too. The base station comes with a multi-region power adapter that has a handful of snap-on plugs you can swap out if you find yourself traveling with the Warhead to other countries. Plug removal is as simple as pressing the release button on the adapter and removing the attachment. The adapter itself is slightly wider than a standard plug, but it’s still small enough to slide in alongside most other plugs on your power strip.

You have two options for connecting the audio to your Xbox 360, and they’re both single-cord solutions with all necessary cables packed in the box. The recommended setup uses the optical cable, which plugs directly into the rear of the A/V adapter on newer console models. If you prefer analog audio to digital audio, you can attach an included stereo RCA adapter to the console’s RCA jacks that hook up to your television. The adapter is just an extra piece in the signal path; it funnels the audio into the base station as it heads to your television. Tritton even shows some love to older-model Xbox 360 owners by providing an adapter that allows them to connect the optical cable to consoles without a port for it.

Tritton even shows some love to older-model Xbox 360 owners, with an adapter that allows you to connect the optical cable to consoles that aren’t equipped with a port for it. I don’t have an older model HDMI-equipped Xbox 360 to test it with, but the dongle appears to be thin enough that the HDMI port wouldn’t be blocked, a common problem with those older boxes.

Attaching the chat mic is the final stage of the headset setup, and it’s incredibly simple. The mic attaches directly to the left earpiece via a 1/8-inch jack. No wires are required, either to the headset or to your controller. Tritton scored an exclusive licensing partnership with Microsoft, which means that the Warhead is the only third-party option on the market fitted with the console-maker’s wireless security chip. The headset is 100 percent wireless, able to operate independent of any other peripheral hardware connected to your console.

Once you’re all plugged in, pairing your headset with your Xbox is the only step that remains. Again, we see the advantage of having that wireless security chip from Microsoft. There’s no USB dongle to connect to your console or anything like that; you simply press the sync button on the headset and press the sync button on your console, just like you would with Microsoft’s own wireless headset or any of its wireless peripherals. Having the wireless security chip also means that you can get a battery-meter reading whenever you press the guide button, again, like you would with one of Microsoft’s own headsets.

The first thing you’ll notice when you pick up your new Warhead cans is how solidly built the headset is. Nothing in the design feels chintzy. This is a formidable and sleek piece of hardware with comfortable faux leather noise-canceling earpads and a soft rubber strip allowing the whole thing to sit comfortably on top of your head. The headset is slightly heavier than many competitors, but it fits snugly. My ears became sweaty after a marathon gaming session of more than five hours, but the headset itself otherwise felt comfortable during that whole time.

All of the controls you need are located on headset itself, which can be a mixed bag. You’ll experience a learning curve as you get used to adjusting the separate chat and game audio volume settings, which are located behind the left and right earcups. A button at the base of the headset’s mike allows you to mute yourself at any time in chat with a helpful red light popping up at the tip of the mike to let you know no one can hear you. Front-mounted buttons are on each earcup; the far left button allows you to switch between analog and digital inputs, and the right one switches between the game, music, and movie equalizer (EQ) presets.

Although having all the volume and audio controls so conveniently located is great, some of the controls are positioned in such a way that you can easily tweak a setting by accident when all you really meant to do was adjust the Warhead’s position on your head. The volume controls, digital-analog switch, and EQ are all prone to this because of their location on the headset. The tradeoff, of course, is that this placement is what makes the controls so convenient.

Tritton rates the rechargeable lithium-ion battery for 12 hours, but I was able to get closer to 15 to 16 hours of gaming and music listening streaming in before it died. The base station includes a separate audio input, allowing you to connect an external audio device such as an iPod. Another neat feature of the base station: A removable cover at the front hides the battery charger housing, and the package includes two batteries. So you can always be charging one while using the other. On the headset side, the battery port lives inside the right earcup. A magnetic cover hides the port to preserve that sleek design.

Here we come to the most important analysis: sound quality. The build quality of the Warhead 7.1 is exceptional, and the extra features are nice indeed. But construction and features amount to nothing if the sound being piped into your ears is less than perfect. Fortunately, that is not the case. The wireless Warhead delivers sterling sound in multiple Dolby formats. Obviously, you’re not getting true 7.1 surround sound here, but the virtual re-creation is as good as this sort of thing gets.

When the EQ settings are turned on, the frequency range is good with particularly solid bass response. The virtual-surround effect worked extremely well in Ghost Recon: Future Soldier, a current shooter passion of mine. The game offers an excellent testing ground, too, with its “strongly suggested” installation for enhanced audio. The Dolby 7.1 fakes it well; I was able to get a solid sense of the direction from which different sounds were coming as I played. The Warheads’ sound quality definitely surpassed the $200 Astro A30 audio system, but we didn’t have the $300 A50 (which is probably a closer competitor) on hand to compare.

Chat performance is equally good, although we had to do some trial-and-error testing, thanks to twin-volume-dial setup. However, all sounded crisp and clear once we adjusted our levels correctly. The feedback from fellow gamers on the other end of the chat was positive – no complaints of dropouts, static or distortion. The Warhead headset also has a selective voice-monitoring feature, entirely optional, that allows you to hear your own voice in chat as you speak. This is particularly useful with noise-isolating cans like these because you can easily find yourself shouting into the mike.

One of the biggest tech-y features that the Warhead boasts is its use of 5.8GHz frequency to transmit wireless audio, setting it apart from the 2.4GHz frequency that Microsoft’s own peripherals use, eliminating the audio drops that you sometimes get with them. The Warhead also continues to perform well when you move away from your console. I was able to walk into any room of my relatively small two-bedroom New York City apartment without any loss of audio and, again, without reports of dropped chat from anyone in my gaming party.

Tritton’s Warhead 7.1 is, overall, the best wireless audio and chat solution available for Xbox 360. The sound quality falls between great and exceptional, the design is sturdy and sleek, and the seamless integration offered by using Microsoft’s wireless security chip can’t be undervalued. You might find that competing offerings from Turtle Beach and Astro come out stronger in one category or another, but the Warhead is a brilliant piece of Xbox 360-exclusive gear that offers much to justify its $300 price.

Dell’s new XPS 13 2-in-1 rivals the Surface Pro, minus the headphone jack