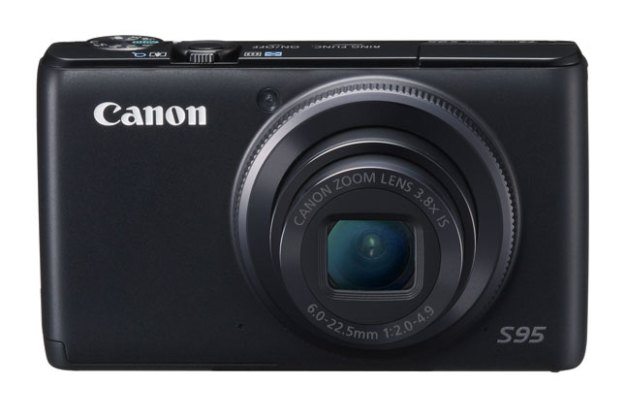 Last year, Canon introduced the S90, one of the best point-and-shoots we’ve ever tested. Rather than go crazy with megapixels, the camera featured a 10-megapixel imaging sensor with larger (rather than more) pixels and a very fast f/2.0 lens. The result was a camera that took extremely high-quality stills, even in low light. It wasn’t the perfect camera, because it’s rather slow like almost all point-and-shoots, but it was definitely good enough for an Editor’s Choice designation. Now Canon has enhanced the S90, unveiling the S95 at a lower list price. Let’s see if this one is a slam-dunk Editor’s Choice as well.

“Minimalist” is the best way to describe the Canon PowerShot S95. Practically all black with a muted finish, the only thing that pops is the white Canon logo on the front and a few decals on various rear controls. It’s city-slick, unlike the zillions of silver-bodied digicams available. Very compact with rounded edges, the S95 is barely a fraction smaller and lighter than its predecessor. It measures 3.93 inches wide, 2.3 tall and 1.16 deep, tipping the scales at 8 ounces fully loaded.

The front has the same 3.8x zoom as the S90, with a nice 28-105mm focal range. Of course we’d like more on the telephoto side, but it’s similar to the new Panasonic Lumix LX5 ($499), another 10MP digicam targeted to enthusiasts. As mentioned, the S95 had an f/2.0 wide aperture lens, a critical spec for taking quality shots in low light; the LX5 has this as well.

Surrounding the S95’s lens is a clicking control ring, a feature we loved on the S90. What it adjusts depends on the mode you’re in, or the function you designate. In auto, you can click between focal lengths (28, 35, 50, 85 or 105mm). In Program AE it manually adjusts the focus or the function you’d like such as ISO. This is linked to the control dial surrounding the standard four-way controller on the back. In other words, between the two you have loads of adjustments at your fingertips, something rarely found on compact point-and-shoots. If you want to go beyond just plain auto — and you should — this compact camera lets you do just that.

Other than a pinhole stereo mic and an AF Assist lamp, the rest of the front is clean as a whistle.

The top of the camera has a pop-up flash, the power switch, a ring function key, the shutter button surrounded by the zoom toggle, and the mode dial. The dial has PASM and custom options, along with SCN for access to 18 scene modes, as well as a movie option. This camera has HD video recording, unlike last year’s edition, which captured 640 x 480 pixel SD footage. It’s 720p, not full HD, but at least it’s high-def. The scene modes are the usual, such as portrait and fireworks, but there are several unusual ones, such as fish-eye and miniature. One brand new option is HDR, for high-dynamic range. Here the camera takes three shots in a row, then combines them for a wider dynamic range. You must use a tripod, because even the improved optical image stabilization won’t keep the camera steady enough to pull this trick off. There’s also a low light option for shooting candle-lit scenes. Here, ISO ranges 3200 and 12,800, but resolution drops to 2.5 megapixels.

The rear is dominated by a quality 3-inch LCD rated a fine 461K pixels, the tops for point-and-shoots (DSLRs hit 921K and more). To the right of the screen are shortcut, playback, display and menu keys along with the four-way controller with a center function button surrounded by a control dial. There’s also a tiny speaker. On the right are compartments for USB and mini HDMI outputs, while on the bottom is the tripod mount and slot for the battery and SD card. The battery is rated 200 shots per CIPA, a pretty weak number, so you should consider picking up a spare if you plan to shoot all day.

The PowerShot S95 comes with a battery, plug-in charger, USB and A/V cables, as well as a CD-ROM with software to handle images and develop RAW files.

Before getting into the results, lets state the S95 has a slightly different button layout than the typical digicam, so when you think you’re pressing the shutter, it’s really the mode dial. This didn’t take long to overcome, nor does learning to keep your left forefinger off of the auto pop-up flash. Onscreen menus are easy to follow, but you definitely should download the manuals to appreciate the control dial options, since they’ll really help you expand your photographic horizons. Also, the camera is a slow shooter — around 1.9 frames per second — so don’t expect to capture running children or football action. If you want truly fast frames per second, check out the Sony SLT-A55V, one of our new favorites. Now, on to the images.

Naturally, we shot highest resolution 3648 x 2736 pixel JPEGs, and used the RAW option as well. We started off in auto, then spun the mode dial for other options including low light mode, which can bump ISO to 12,800 (the auto range is 80 to 3200, with many more stops than the typical digicam; the same holds true for aperture and shutter speed). Once finished, we made a many prints, examined the files closely on a monitor and watched the HD clips on a 50-inch plasma screen via HDMI.

Just like the S90, we were really knocked out by the lack of noise of our standard test subject. ISO 1600 was fairly clear, and even 3200 are very useable, something impossible to state with most point-and-shots, even some DSLRs. We took a number of evening shots at a picnic, and the bright lens “lit” the people and tables far better than another camera we had with us — an older Canon DSLR. As for the low light mode, Canon suggests using it with a birthday cake and candles. We used a single candle in a dark room and the results were excellent, even for 2.5 megapixels (we easily made 8.5 x 11 prints). Overall, colors were very accurate, the good Canon feel we like so much. The only disappointment was the slow shot-to-shot speed. The photos more than made up for this weakness.

The S95 takes 720p HD movies, and the quality is just OK, with lots of noise during interior clips, but with enough outdoor light, they’re acceptable — nothing more. AVCHD is our benchmark, and this camera doesn’t hit it. On a plus side, the sound is fairly robust, given the pinhole mic, and it plays back in stereo.

Just like the last year’s S90, we have no problems recommending the new S95, other than the issues detailed. It has tweaks galore, we really like the control ring, and the photo quality is top notch. There’s still the issue of speed, but that’s a problem shared by almost all point-and-shoots. We found ourselves using the S95 more than the DSLR we carried to compare, but when it came to sports, the larger camera got the call with its faster burst mode. If you keep that shortcoming in mind, you’ll be quite happy with the PowerShot S95.