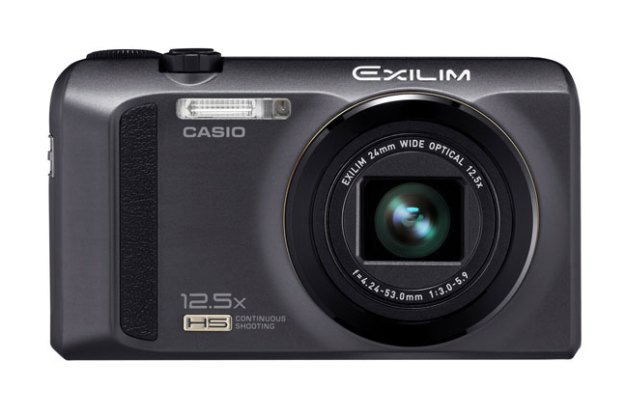 “The point-and-shoot’s speed, low-light performance, and superior build do enough to justify its $300 price tag and just might bump it into the same realm as competitor cameras from Canon and Nikon.”

We first got a glimpse of the Casio EX-ZR100 at CES. The high-speed EXILIM point-and-shoot was unfortunately overshadowed by the trendy TRYX, Casio’s Facebook-friendly, turnable, twistable camera. And while the TRYX has more than a few gimmicks on its side, we were initially drawn to the sturdy, capable EX-ZR100.

The EX-ZR100 has just the look we like: Matte black styling with a simple face and understated side grip. At first glance, its styling is reminiscent of the Nikon S9100. The camera features a top mode dial for determining settings, and the shutter button is located nearby with zoom toggle included.

The top of the camera also features a dedicated high-speed function as well as the power button. On the camera’s back, you have a 3-inch LCD, extremely sharp 460K-pixel display, a dedicated movie record button, as well as a slightly confusing camera function. This red icon is there to switch back from record to taking stills, but more than once we hit it hoping to take video. There’s also a playback button and menu indicator, and in the center of all this the model dial for selecting in-screen settings.

What puts the EX-ZR100 in the same arena as higher-quality cams from the likes of Canon and Nikon (at least when it comes to design) is its feel. It’s a heavier, solid-looking and feeling camera, which is an element we appreciate in a point-and-shoot. The deluge of flimsy, too-thin pocket cameras on the market makes for more than a few consumers who find themselves replacing easily broken devices year in and year out – which is why we prefer something with a little heft to it. Getting into its specs, the camera weighs in at 7.23-ounces and measures 4.13 inches wide, 2.33 inches tall and 1.13 inches deep.

Unlike some of its mini-DSLR and high-end point-and shoot competitors, the EX-ZR100 doesn’t sport an optical zoom to write home about. That said, the wide-angle 12.5x zoom gets the job done and is fairly impressive for a camera its size (not everyone can outfit a point-and-shoot with an 18x optical zoom). It extends from 24mm up to 300mm, so to say it should fill your angle needs is putting it lightly.

We would have really liked to see a manual pop-up flash on the EX-ZR100, but the built-in function was easy to manipulate. Too often, the flash on a point-and-shoot is difficult to turn off, and your pictures are spoiled by its overuse. However, turning the flash on and off on the ZR100 is extremely obvious and easy via the center mode dial.

Other notable features include stereo sound recording, and a top model dial control that varies from the settings cameras traditionally offer. Instead of offering preset options like pets, beach, or snow, the EX-ZR100 relies on its auto-detection technology to format your photos. It also has single shot, best shot, panorama, best selection, HDR, HDR art, and manual settings.

Best shot and best selection deserve a little explanation. These two settings put Casio’s high-speed technology to use: Best selection shoots a rapid succession of photos and automatically selecting the best one. Best shot gives you the ability to half-press the shutter and allow the camera to assess the setting and adjust to produce the best results.

In general, the EX-ZR100 was a pleasure to use. Its incredibly quick shutter and ability to capture moving objects – and most especially, its low-light performance – kept us from dealing with common point-and-shoot quirks.

We were most impressed with how quickly the EX-ZR100 starts up and shoots. There’s little to no wait between autofocus and capture, and its best-shot and best-selection features are breathtakingly fast. Like we said, we also appreciated its design and size. It’s pocket-friendly without disappearing, and fits nicely in your hands. Buttons and controls are the appropriate size, and the super bright, crisp LCD offers accurate, clear viewing and playback.

Those are all things we’ve come to expect from cameras of a certain price range (read: $300 or more). And that’s why we were so happily surprised with its low-light performance, which was surprisingly good. The EX-ZR100’s backside-illuminated sensor means the camera can bring in more light, and do it faster. We did have some issues with blurry photos when using zoom in low-light situations, but otherwise images were generally sharp with minimal noise at high and low ISOs.

The most disorienting thing about the EX-ZR100 was the lack of pre-set modes for the shooter to peruse. We’ve become used to being able to flip through options like fireworks, food, and e-portrait. Sure, some of them are superfluous, but they are quickly becoming a standard feature users like to see in their cameras. If for nothing else, they are part of what consumers expect to come included in a point-and-shoot they are shelling out more than $150 for.

That said, there was one big benefit that came from this lack of settings. It’s easy to become reliant on prescribed modes, but without them we found ourselves really putting the EX-ZR100’s manual settings through their paces. There’s definitely something strange about spending time experimenting with the ISO and shutter speed of a camera that fits in your pocket, but only initially. And the EX-ZR100’s in-camera UI is easy to manipulate, to a fault. There is no confusing maze to scour through, although the in-screen menu is rather ugly and technical. The center “set” button lets you navigate through options on the right-hand side of the screen, and it’s a very utilitarian setup. That’s a rather inconsequential thing to complain about, but when you’re appealing to consumers moving on from basic point-and-shoots to more advanced cameras – a friendly menu can go a long way.

The EX-ZR100 has a dedicated movie record button, and its high-speed technology doesn’t stop at stills. It records full HD, 1080p video at 30fps. There’s a high-speed movie shooting guide included with the camera, which walks users through capturing particularly action-packed situations. Shooting video was adequate and in well-lit situations, autofocus worked perfectly. Low light was more of a challenge, but we’d say the EX-ZR100 is on par or very slightly outperforms competitor camera video quality.

Instead of your standard spring-loaded door, the EX-ZR100 has a button door, which is disorienting only because it’s different. However, battery life was excellent. We shot for a week straight with the ZR100 and never had to recharge it.

The more disappointing feature was the HDR and HDR Art filter effects built into the camera. A myriad of entry-level and compact DSLR camera come with creative built-in filters, and Casio chose to outfit its camera with HDR effects. We’re simply not fans of this style: It looks cartoonish and amateur in our opinion, and we’d rather have seen pinhole or cross-process options instead. That said, we love the camera’s sweep panorama feature, which lets you take ultra-wide panoramas with a simple pan of the horizon.

But these are small caveats for an otherwise extremely capable camera. We’d rather spend the extra five minutes using desktop applications to edit photos than use them in-camera, but deal with shutter lag or an abundance of blurry images.

The EX-ZR100 isn’t perfect, and the absence of standard pre-sets and offsetting in-camera interface made us occasionally scratch our heads and ask “Why?” But these aren’t the types of features that make or break a camera’s overall performance. Instead, Casio seemed to focus on the technology behind the EX-ZR100 and not the gimmicks: The point-and-shoot’s speed, low-light performance, and superior build do enough to justify its $300 price tag and just might bump it into the same realm as competitor cameras from Canon and Nikon, names more often associated with high-quality point-and-shoots.